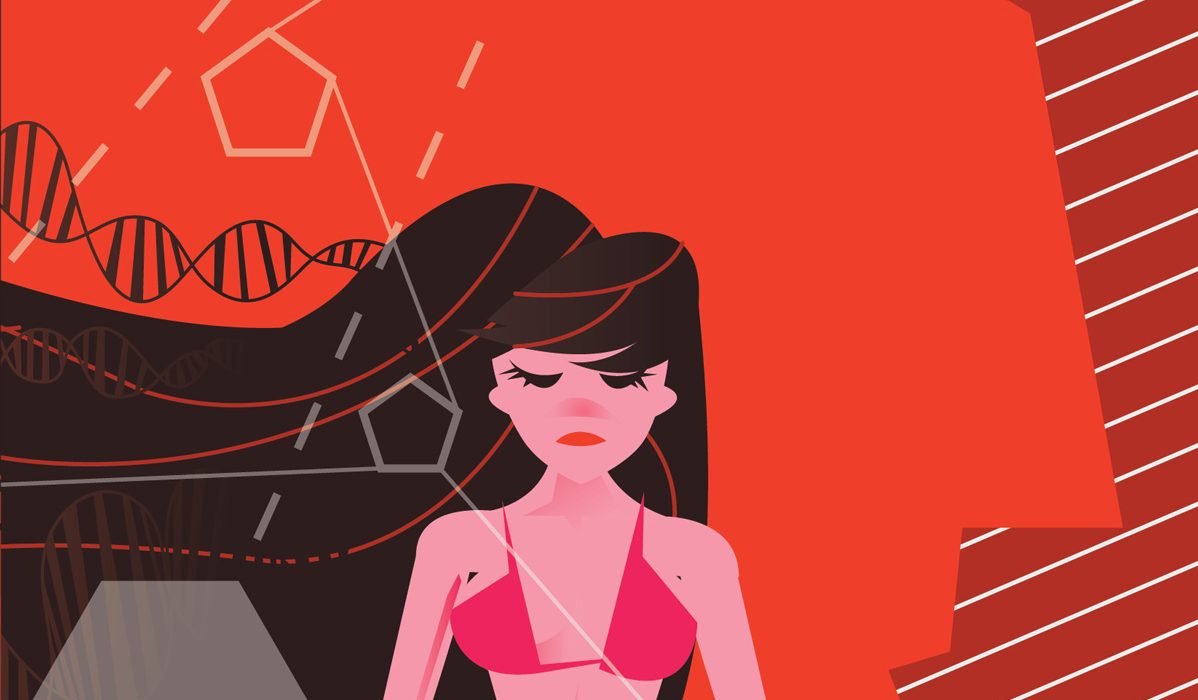 More women are taking on more student loan debt, earning less, and taking longer to pay that debt back.

“Smart and SeXy” presents the latest research with regards to sex differences in intelligence and their biological causes all in one place.

An article recently came out lamenting that a larger number of women were incurring student loan debt and that debt was larger per capita among women than men. It is based on a report (click this, the graphs are worth looking at) by the “American Association of University Women.”  Certainly, this sounds like a factually unreliable organization with an obvious agenda. However, their findings are broadly in line with what I would expect from my own research. Of course, the Fortune article is filled with a lot of ideological garbage blaming the patriarchy, racism, and the mythical wage gap. Feel free to read the article at the first link, but the only really useful information is the numbers.

It is interesting that women are over-represented in incurring debt relative to their overall presence at universities. Possible explanations include affirmative action placement at more expensive schools, better scholarship opportunities for serious degrees which are male-dominated, or male workforce participation during college years, which enables them to take on less debt. Or something else.

However, the overall pattern is the same across races even if the absolute numbers are different. More women are taking on more debt, earning less, and taking longer to pay that debt back. I really have no trouble believing this is true. Unlike the Fortune writer, I don’t believe it has anything to do with patriarchy or gender discrimination. Biologically based gender differences can explain approximately the totality of the differences in outcomes here. For one thing, men have an innate superiority in visuospatial reasoning which makes them tend towards harder sciences, engineering, and computer science which more usually offer a higher wage. This makes it easier to pay back loans regardless of price. The following is a brief excerpt from my book, Smart and SeXy which goes over degree choices by gender. There is of course much more detail and information in the book about this topic. You can see additional excerpts and reviews here.

If a closer look is taken at the specific degrees women are receiving the picture isn’t quite as rosy as is often implied. To be sure, men also succumb to pursuing essentially worthless degrees, but they do so at a lesser rate than women and since the absolute number of men pursuing college degrees is less, the problem is quantitatively less severe even when they do. Some of the most common degrees women are getting, such as business, health, and biological sciences, do make them more employable and socially valuable. Most, however, are notorious for conferring little value in the job market and can be expected not to improve income significantly. Among the top ten most common subjects studied by women as undergraduates are education, social science, psychology, visual and performing arts, communications, liberal arts and humanities, and English. Graduate studies which can also be expected to produce less or no human capital and do not confer much in the way of high income also seem to be much more attractive to women than men. The following tables show the graduate degree paths that are dominated by women (i.e., 50% or more of the students are female) and men respectively, as well as the average GRE score for each major. 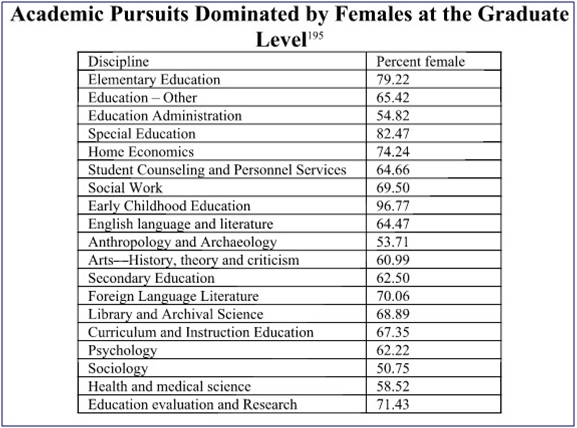 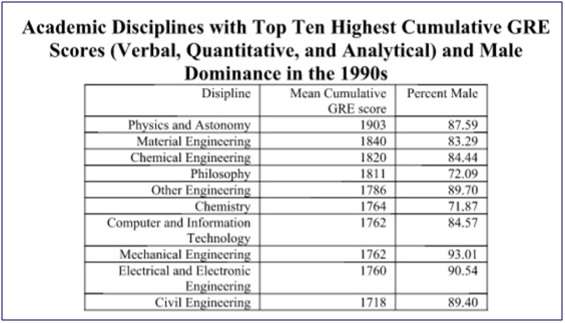 All of the degree paths examined by the particular study and found to be female dominated are included. A number of these paths are essentially just “professionally” training women to be mothers or surrogate mothers of children. Elementary and early childhood education stick out in this regard, though probably all of the education paths do this to one degree or another. How anyone could possibly think it is necessary for women to have expensive post-tertiary degrees to watch young children play is hard to understand. Women have been watching young children successfully without any education for millennia before this farce was introduced at universities. Other degree paths which seem particularly useless include English and foreign literature, art history, home economics (i.e., how to be a housewife; where is grandma when you need her?), and student counseling. Disciplines which in theory might be useful if properly designed, such as psychology, sociology, and anthropology, have the problem of being almost totally infested and controlled by people with very radical, far-left ideologies. Considering how far these ideologies force these areas of study away from realistic understandings of reality, their utility is heavily undermined. Though the study this table comes from does not provide information on the relative number of women pursuing each field, it does provide a general idea of the type of degrees women are more attracted to than men in post-tertiary education.

Another issue making it difficult for women to pay back their debt is that on average they prefer working significantly fewer hours than men. Again, from Smart and SeXy:

A study which tracked high ability men and women found that there are large gender differences in the preference for the number of work hours per week even after controlling for the high general intelligence prerequisite. Those who prefer to work 40 hours a week or less are overwhelmingly female, and those who work or would be willing to work over 50 hours a week are overwhelmingly male. The preferences found in this study are supported by US department of labor statistics. 26% of working women were part-time in 2011, which is twice the rate of men. 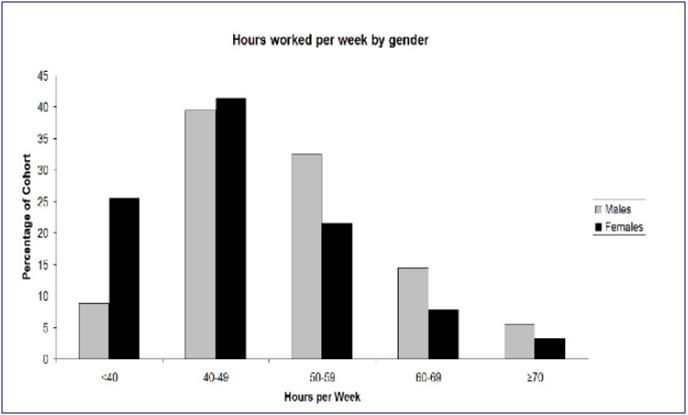 Now to ease up on “blaming women” a bit, we can look at the overall pattern of college debt. According to the AAUW report, for both genders, the accumulated student loan debt by the time of graduation increased by approximately 30% between 2004 and 2012; a mere 8 years!!! And it is probably even worse in 2017. Women may overall be more prone to bad decisions, but it would be a lie to say that this is the only important factor involved or that large numbers of men aren’t also making bad decisions with respect to education. Universities are churning out an increasing number of people with useless qualifications and exponentially increasing the cost of these degrees at the same time. Meanwhile, high schools, parents, counselors, media, etc are all highly encouraging both men and women to incur this ridiculous debt for these worthless credentials. Let’s not forget that the people expected to competently make financial decisions with respect to education are only 18 years old. 18-year-olds are understandably not experienced nor well-read enough to be expected to make good decisions without proper support and good guidance from elders, which they are decidedly not getting. If I assigned blame with respect to the higher education farce, I would probably only assign 20-30% to the naïve kids being duped. The lion’s share of the blame belongs to the propagandists and liars in the media and education who are willfully scamming kids out of tens or hundreds of thousands of dollars (the evil and stupid people, respectively, in Captain Capitalism’s description).

If you found this article interesting, check out Smart and SeXy by Roderick Kaine, published by Arktos in 2016.

TopicsfeminismGender roles
Share on FacebookShare on TwitterShare on RedditShare on VKontakte