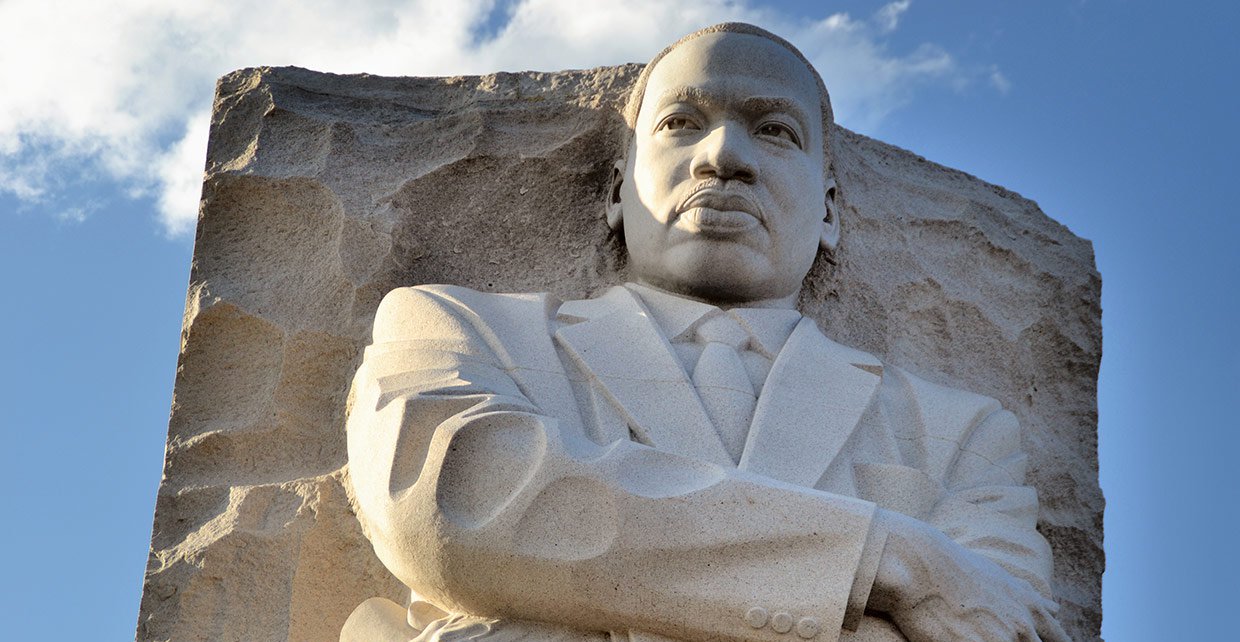 Like many people of modest cognitive ability, Blacks fail to accurately assess how they are being perceived by others. Their complaints and protests about supposed racial injustice have been constant and increasingly abrasive.  Are you sick of it yet?

It’s a kind of amusing paradox that the more they complain, the more they alienate themselves.  Hence race relations have gotten worse and worse.  It’s a vicious cycle of stupidity and a cringe-worthy lack of self-awareness.  What are we going to do about this never-ending and tedious problem?

We have reached a stage where Whites are beginning to view Blacks and their antics with a jaundiced eye.  This includes practically all non-liberal White people; they are starting to question the victimology lens with which they have been conditioned to use when viewing Black people.  Whites can’t quite put their finger on it, but something in the racial dynamics of 2018 is askew.

Consider the 43 percent of Whites who earnestly and naively voted for Barack Obama in 2008.  The tone of Obama’s comments on race controversies were seen by many Whites as unacceptable, and the memory of his divisive rhetoric lingers even in their minds.  Ever since the controversies of that era, it appears that both Blacks and Whites have changed their perspectives on race in America; perhaps the only commonality is the belief that race relations have gotten worse!

These controversies involve Louis Gates, the professor who was thought to be robbing his own house (an understandable mistake by the police and neighbors); the Trayvon Martin shooting, the reader will hardly require a recap; and Michael Brown, the “gentle giant.”  Obama was so partisan, so racially partisan, in these affairs that White voters felt as though the good faith in which they had put in Obama’s new race-blind America was misplaced and betrayed.  Instead, unwittingly, Whites had entered into an era of increased racial polarization, with President Obama quite frankly rooting for the other side.

For Black Americans, nothing has changed in terms of their vision of their place in the universe.  All their problems and failures are still attributed to the nebulous specter of “White supremacy.”  Whites, on the other hand, were under the impression that we had already done the Civil Rights movement, that we had already elected a Black president.  Aren’t we good now?

Alas, the problems have just begun!

For some hard data on the matter, we see that at the beginning of the Obama presidency, 52 percent of US Adults thought race relations would be improved by his election.  A year into his presidency, that number plummeted to 36 percent. For Trump, not many people were under the illusion that his election would improve race relations: 25 percent thought they would improve upon his election, and now a year in the percentage of people who think they will improve is only 8 percent.  Yet was it ever Trump’s mission to “improve race relations” and all the capitulation that the phrase implies? 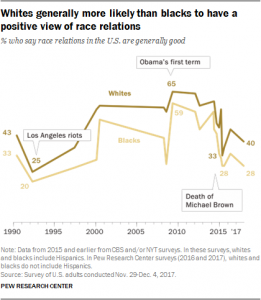 As can be seen from the chart above, Whites were foolishly optimistic as to the effect that electing the first African-American president would have on race relations, but gradually woke up to reality.  Just imagine the self-congratulatory smiles of White liberals after electing Obama, thinking they had squared their accounts with Blacks.  Amazing is the precipitous fall in the optimism of Whites on race relations with the death of “hands up, don’t shoot” Michael Brown, and then a significant, but ultimately illusory surge in Whites’ optimism on race relations after Trump’s election.

To further interpret this data, it is interesting that Whites consistently have a more sanguine view of race relations than Blacks, by about ten percentage points.  From this one may extrapolate that Whites are to a large extent unaware of the frank hostility with which Blacks regard them.  And to be fair, much of this hostility is perpetuated by our elite-controlled media and their continued demonization of Whites.  Even to put aside the question of media propaganda, one cannot help but deduce that this hostility would remain regardless.

If one compares the height of Blacks’ satisfaction of race relations with the election of Obama, 59 percent, with that figure now, 28 percent, one begins to understand that Blacks view themselves as having had a jarring reversal of fortunes.  Only then can one understand the true level of their aggrievement with our mischievously provocative president.

Now to add some color to the analysis (no pun intended), I happened to be watching C-Span on Martin Luther King’s Day and heard some provocative viewer calls on the topic of race relations.  The gaping divide between the sentiments of the White and non-White callers was food for thought.

After displaying a shot of the monstrous Dr. Martin Luther King Memorial statue in DC, they went to callers who would sound off on “Your view on race relations.”  The first caller was Black (C-Span is inundated with Black callers who apparently have nothing else to do).  He lamented White racism and expressed resentment that sometimes conservatives invoke Martin Luther King (he’s referring to the typical cuckservative invocation to judge others by “the content of one’s character”).

A few minutes later, a White caller had a more substantive assessment:

Over the last ten, twenty years, White characters have been caricatured pretty viciously, and it’s getting worse with [us being] caricatured as either bumbling idiots or racists; and Blacks are always heroized […] White people seemed to have dismantled their racial consciousness.  Every race has a sense of peoplehood; Whites had that for hundreds of years and they were very successful.  But they’ve been trying to actually live up to this Dr. King idea.  It’s Blacks and these other groups who almost burnish [sic] their resentments, their anger, and almost a sense of tribalism.

At which point the host, a non-White named Pedro, interrupts him: “You would say that wholesale about all African Americans or just certain ones?”  The host did not, however, object to categorical statements about White people made by Black callers throughout the segment, who without variation ranted about “White supremacy” and other slanders against Whites as a group, not just “certain ones.”  The caller responded by noting that C-Span had become very “Afrocentric” with an almost obsessive focus on slavery and racism.

Blacks have been so conditioned by the Hollywood narrative on their victimhood, and their always laudable response to their oppressors, that they fail to realize that perceptions are starting to shift.  Americans have grown weary.  Black activists have drained the reservoir of goodwill to the point that no one is listening to their lamentations; and when Black activists insist on being heard, their grievances do not always seem so reasonable, to say the least.

Shelby Steele, a Black conservative writer (apparently a mulatto), summed up the situation nicely in the Wall Street Journal the other week.  He comments on the ridiculous spectacle of Black football players kneeling for the National Anthem:

For the NFL players there was no real sacrifice, no risk and no achievement. Still, in black America there remains a great reverence for protest. Through protest—especially in the 1950s and ’60s—we, as a people, touched greatness. Protest, not immigration, was our way into the American Dream. Freedom in this country had always been relative to race, and it was black protest that made freedom an absolute.

It is not surprising, then, that these black football players would don the mantle of protest. The surprise was that it didn’t work. They had misread the historic moment. They were not speaking truth to power. Rather, they were figures of pathos, mindlessly loyal to a black identity that had run its course.

What they missed is a simple truth that is both obvious and unutterable: The oppression of black people is over with. This is politically incorrect news, but it is true nonetheless. We blacks are, today, a free people. It is as if freedom sneaked up and caught us by surprise.

Even if you are a non-ideological White who buys into the heroic portrayal of the ‘60s Civil Rights Movement, that era which is studied with such reverence in our public schools, it does not necessarily follow that you will view Black Lives Matter temper-tantrums with the same hushed reverence.  In fact, it’s laughable to compare the two, even if one takes a cynical view of the Civil Rights Movement itself (such as the fact that it was based on the false pretense of equality).

Not only, as Mr. Steele says, have Blacks “misread the historic moment,” they have ludicrously misread the public itself.  Their hatred of Trump is all part of this dynamic.  This is creating a vicious cycle in which their behavior and attitudes, in reaction to Trump and all he represents, become more and more militant and unseemly in the view of a public.