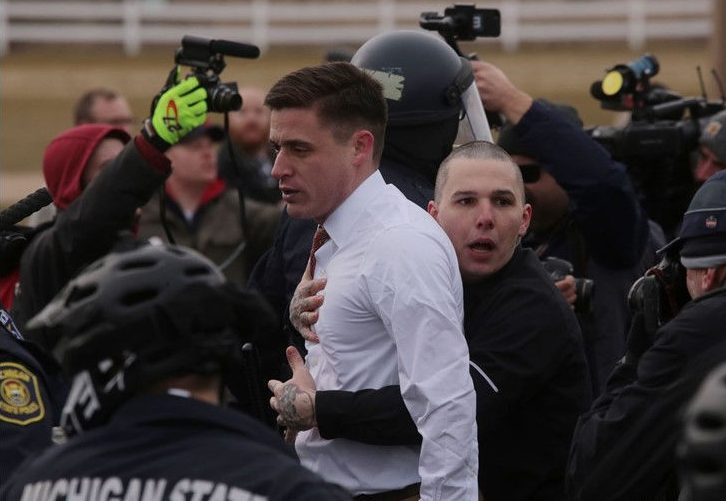 One dramatic moment in time which captured the essential mission and purpose of the Alt-Right.

The media claims the Alt-Right has fractured since Charlottesville, and of course, the media is correct.

The stated purpose of the August 12, 2017 Charlottesville rally was to “Unite the Right”… and it succeeded, briefly. Leaders and followers, supporters and members of every organization, every faction and every strain of thought in the American pro-white movement were on the ground.

The star-spangled banner, which once flew as a symbol of American national independence against British imperial tyranny at Fort McHenry, waved side by side with the stars and bars, the battle flag of the old Confederacy. These flags fluttered beside 21st-century symbols of our people’s resistance: the dragon’s eye of Identity Evropa flew beside the gear-and-pitchfork banner of the Traditionalist Worker Party.

This picture of unity and the massed thousands of our brave men and women who assembled to protest the removal of the Lee monument shook the world — and it terrified the enemies of our people’s right to exist.

Overnight, the American pro-white movement went from being a shadowy and anonymous internet presence to a spectacular real-world army in the streets. The anti-white establishment knew we had to be stopped at all costs.

With swift thinking and action, our lawyers wrestled with and overcame every underhanded legal obstacle the leftist establishment threw in the path of our right to free speech and free assembly. Their massed forces of communist goons, armed with knives, clubs and improvised chemical weapons, proved no match for the bravery and determination of our people to reach their legal and constitutional assembly point.

When all else failed, the leftist establishment unleashed the full force of the militarized police state against us. The Jewish mayor of Charlottesville, along with Hillary ally and Democratic Party apparatchik Terry McAuliffe, used the pretext of declaring a state of emergency as the excuse to attack our peacefully-assembled citizens with riot police and chemical weapons in the most blatant government violation of First Amendment rights in the 21st-century.

Without provocation, and in spite of gallant nonviolent resistance by our men, the police physically smashed our rally and drove our people into the vicious antifa horde. We were forced to scatter and retreat under constant attack. In the ensuing police-instigated chaos, dozens were seriously injured and several human beings tragically lost their lives.

What followed was the most coordinated attempt by the government, corporate media and big business to silence online free speech and dissent in the history of the internet in the West.

Pressing their advantage, our wealthy and powerful opponents brazenly blamed us for the violence instigated by them. The leftist thugs who wore masks and attacked our people with weapons were set free by the corrupt legal system, while our own men rotted in jail cells for months simply for defending themselves. Powerful corporate law firms filed suits to bleed our cash-strapped movement of its meager funding. Those who attended the rally were subjected to mass campaigns of targeted, media-approved social media bullying and harassment. Their families were terrorized and they were fired from their jobs.

It is understandable that in the dark months of coordinated systematized political terror since those events, regrets and recriminations would occur. Differences in strategy and tactics would boil over into vocal disputes. Accusations would be leveled and past disagreements would flare up anew.

This was the goal of the establishment — with their widespread and relentless persecution after Charlottesville — and in this, they have at least partially succeeded.

But on Monday, March 5th 2018, a picture emerged amidst this division which will testify for all time to the mission and purpose of the Alt-Right, and the resilience of our men and our ideas.

The MSU speech only took place under the most extreme difficulty and duress. Once again, outrageous legal challenges were thrown in our path and overcome. Once again, our people were harassed and targeted like criminals as they attempted to peacefully gather for harmless social gatherings. Private venues were threatened and shut down. Mobs of armed anarchists, openly chanting about “punching Nazis” as they burned American flags, were allowed to attack our people with impunity as the police stood by and watched.

This time, the establishment cleverly targeted our strongest legal advocates before they moved in for the kill. With our lawfare defenses down, the police were free to let the antifa horde attack our people in what has been called another “mini-Charlottesville.”

We were promised a secure parking area and that our ticket-holding event attendees would be protected into and out of the auditorium. Instead, our people were led by police directly into a communist trap. Our people were told by campus police they had to march through the horde of masked thugs to reach the venue. Even the extremely hostile Detroit Metro News was forced to admit: “The confrontation began after police intervened in a way that forced a line of members of a neo-Nazi group to bypass several hundred protesters in order to enter the event.” The Lansing State Journal reported one antifa was caught “armed with a knife, brass knuckles, a baton and a ‘plastic stabbing device’.”

In spite of this treachery by the authorities, the men of TWP and others still managed to give an incredible account of themselves, tossing around the antifa gutter punks like rag dolls. Our guys carried no weapons, but bare-handed managed to drive back a mass of cowardly bullies brandishing knives, clubs and brass knuckles. But wishing to avoid another Charlottesville, and sensing another establishment-engineered riot, the TWP leadership made the wise decision to withdraw before the situation could turn deadly.

Those who withdrew got out without serious injury, even managing to capture the communists’ flag. Richard Spencer held his speech, in spite of everything, but only with superhuman effort to overcome all the obstacles thrown in our path.

The First Amendment is hanging by a thread in the United States in 2018.

Debates and angry recriminations about optics, tactics, strategies, and personalities continue to rage within the pro-white movement.

But the moment which will be remembered most from MSU was the scene as our men were blocked by communists and police on the road to the venue.

One young man, known and respected by all in the movement as a deep thinker and erudite writer, with a sensitivity for art and a deeply nuanced understanding of history and culture, confronted the police as they manifestly refused to do their job. He faced down a squad of heavily-armed thugs in full riot gear and, with an impassioned speech, reminded them of their duty under the Constitution. He sported the fashy undercut, tailored white shirt and khaki pants popular with educated Identitarians.

In that moment, another man sprang to his defense. I was with this man the night before, as he coordinated the shuttling of conference attendees to our backup venue. I knew him to be a young man of courage and devotion to duty. That afternoon on the road, he was decked out in the black fatigues of the socialist TWP. His neck and hands were etched with tattoos; his face and bearing those of a worker.

The two men could not have looked more different. Their differences spoke to what is perhaps the greatest wedge presently dividing the American pro-white movement: that of class sensibilities. This is not an accident.

Charles Murray, author of “The Bell Curve,” wrote an entire book about this neoliberal 21st-century phenomenon: “Coming Apart: The State of White America, 1960-2010.”

The back cover of this book describes how within white America:

…a new upper class and a new lower class have diverged so far in core behaviors and values that they barely recognize their underlying American kinship…. [T]he top and bottom of white Americans increasingly live in different cultures, with the powerful upper class surrounded only by their own kind, ignorant about life in mainstream America, and the lower class suffering the erosions of family and community life that strike at the heart of the pursuit of happiness.

This inner division among white Americans is fueling much of what has divided the movement since Charlottesville.

This division could not have been more on display, and the contrast between the two classes more evident, than when those two young men confronted the police on that dark and overcast day.

Yet here they were, standing side by side, shoulder to shoulder.

The concern by both for each other was evident on their faces. In that moment, both were willing to be arrested — or even to have their skulls cracked open — for the sake of their people, for their rights, and for each other.

They were white brothers united, facing down evil and tyranny, defiant in the face of terror.

It is that moment of class unity, for the sake of our common race and identity as white Americans, and our determination to exist and not be wiped out from the pages of history, which is the deepest mission and purpose of the Alt-Right.

Not class conflict, which is organized and inflamed by the neoliberal enemy, but class reconciliation based on kindred blood and kindred destiny.

It is that moment of unity which our enemy fears most and has worked so hard to destroy since Charlottesville.

It reminded me of nothing so much as that great painting by the European-American artist Howard Pyle, called “The Nation Makers,” which shows an aristocratic-looking American officer standing united with the tattered yet unbroken farmers and workmen of the revolution, as they risk death together for the dream of their nationality.

We in the Alt-Right, and the pro-white movement in general, are the Nation Makers of the 21st century.

We are the revolutionaries standing against tyranny and oppression.

We came from nations, and we are forming a new Nation.

The debates over tactics and aesthetics will continue to rage within our movement. Egos will be bruised, pride will be injured, mistakes will be made, grudges will be held, grievances will continue to fester. Differences in strategy and between competing organizations and leaders will have to play themselves out.

But nobody will be able to take away that moment of unity I witnessed on Monday. It was a beautiful moment, and I will never forget it.