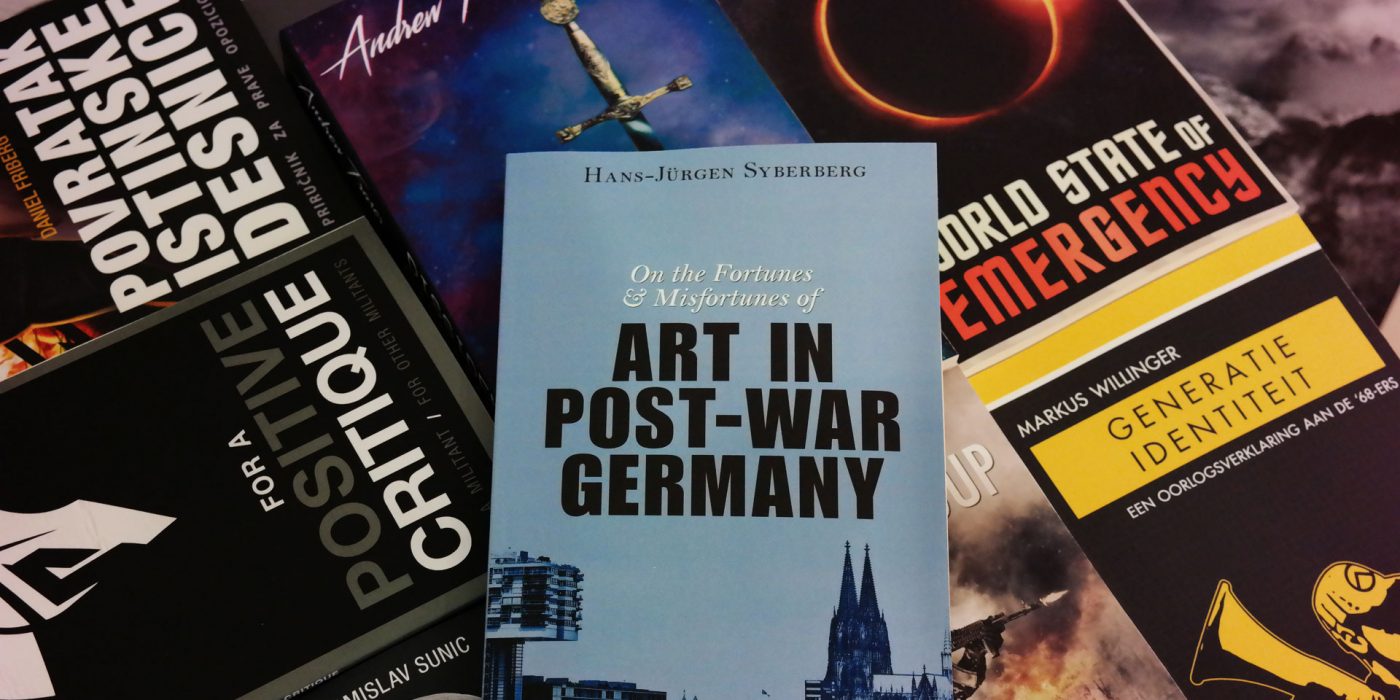 Syberberg and the Decline of European Culture

Just as art has become less organic, society has become more mechanised and driven by the mass consumerism that has grown at the expense of nature.

Hans-Jürgen Syberberg’s study of German culture from the end of the Second World War to the fall of the Berlin Wall, On the Fortunes and Misfortunes of Art in Post-War Germany, is as complex and challenging as his films.

Part national history and part autobiography, part philosophical treatise and part cultural manifesto, part critique of the post-War artistic cliques and culture industry and part examination of the preceding tradition that might even now arrest the decline of the West, Syberberg’s study displays the extraordinary breadth and depth of his knowledge of European culture. There is not a passage in the book that is superfluous; every sentence is built towards a unity of vision. Stories narrated become parables, transcend their own time to become exemplars for all time. The sociological, cultural and historical study of the Germany of his own time transcends time and space and becomes philosophy for all time. The downfall of spirituality and the aristocratic principle to be replaced by democratisation and secularism could apply to anywhere in Western Europe, increasingly in the East, even in India or the Far East. And all the while, Syberberg notes that these processes are interwoven with the fate of the arts.

Not merely concerned with the arts, but, as a filmmaker who was once part of the Germany culture industry, he sees that the control of art is fundamental to the transformations that have occurred in Germany since the Second World War. In this, he does not spare himself in his criticism of those who have served that war’s victors, who imposed their values on German culture and thus on the German people themselves. It is very much as an artist that he writes this work, the style not being that of the dry academic of today, but hearkening back to a time when aesthetics was as much a part of writing philosophy as comprising part of the discourse of philosophy. In this, Syberberg blends metaphor with empirical analysis, challenging the reader to think for himself. Some metaphors are indeed obscure and some sentence structures are what might be described as Proustian, and the translator and I have tried to retain the style of the oeuvre. Aesthetics, after all, is of great concern to Syberberg.

Syberberg is only too aware of the connection between the aesthetics of our arts and the world we create in its image. He berates postmodernism for its baseness, its lowness and its ugliness. Syberberg takes Schiller’s definition of baseness in art as that which only targets sensuality and abandons spirituality and nobility. Lowness is worse for both Schiller and Syberberg, for lowness concerns actually acting against decency and nobleness. The symbol and metaphor that recurs throughout is that of the lost house, which is the key to understanding the text as a whole, just as loss is the key to understanding the German malaise, loss without the recourse to lamentation, forbidden as it has been under the auspices of the so-called liberators, the Allied army of “liberation”, which really meant the army of economic and cultural liberalism, bringing with it an army of functionaries and academics.

Neither does Syberberg avoid the elephant in the room of mainstream cultural discourse: the Jewish Question. The Jewish academic Susan Sontag, who had once quite favourably reviewed his Hitler, A Film from Germany, was apparently shocked by his critique of Jewish influence on German culture and on European culture at large given in this book. His critique is actually a very measured one which asks questions of the Jewish community and invites a discourse rather than attempting to offer a final solution to the problem. Indeed, the question he poses is the one so often seen on the political Right now, on the double standard between the Jews who have gained a nationalist homeland and yet support the political Left in the Occident, on the triumphal suffering seen in the art of Yad Vashem and its denial for the Germans whose women were raped en masse in 1945 and their country carved up with Prussia lost.

The legacy of Auschwitz is also brought into question. For Syberberg, the alleged event is not as important as the culture that has arisen from its legacy, a culture in which the Germans as a people have had an eternal stain placed upon their soul. It is this that is questionable and Syberberg repeatedly throws it back at its chief originator, Jewish Frankfurt School academic Theodor W. Adorno. “No poetry after Auschwitz” echoes in all the contemporary arts, not just in Germany, but beyond, out to the rest of Europe and its extensions, and one notes that Syberberg does not merely turn this back at Adorno, but also stylistically turns his critique of society Minima Moralia back at him too. In many ways, this is Syberberg’s riposte to that attack on traditional Western culture, citing Adorno as one of the founding fathers of West German culture after 1945.

His view of Hitler and his politics is also interesting and perhaps unexpected. While steadfastly refusing to treat him as a secular demon for the new liberal-Marxist faith of the contemporary age, he nonetheless sees him as the accelerator with regards to Europe’s ruin. The criticisms Syberberg levels against Hitler are measured and both artistic and political, for he recognises Hitler as both artist and politician and his fusion of the two spheres that resulted in his shaping the German people as an artwork through politics given German Idealism as a philosophical tradition on which to anchor his magnum opus. In elevating the masses to the status of high art, this, however, meant artificially elevating the masses as an elite: the so-called Herrenmenschen.

Yet Syberberg does not reduce the former West Germany’s malaise to the influence of leftist Jewish academics, nor to the spectre of Hitler. These are mere symptoms of a broader malaise both in Germany and further afield. His greatest criticism is reserved for our abandonment of nature. In this, he views the post-war modernism of art and all its putrescence as reflective of the defilement of nature in the West. A people’s art is reflective of its people itself, and we are found wanting.

Just as art has become less organic, society has become more mechanised and driven by the mass consumerism that has grown at the expense of nature. It is nature to which Syberberg often appeals as a divine authority in his philosophy and he might be seen as a Tolstoy for our present age. How can one argue with his assertions, for the destruction of nature is the destruction of ourselves?

On the Fortunes and Misfortunes of Art in Post-War Germany is available at the publisher’s website.