The data is in: even more desperate white people are committing suicide.

According to new data from the Centers from Disease Control, the suicide rate is the highest it has been in decades.

The public-policy-oriented outlet GOVERNING has translated the data into a color-coded map of the United States showing the rate of suicide death for each county.

The data reflects a pattern of increasing suicide death among rural whites. By comparing the county-by-county map of suicide deaths to a graphic like the Racial Dot Map, which presents demographics and population density data nationwide, one can begin to observe regional and racial patterns.

In fact, these patterns already existed, and have for some time. In spite of a prevailing public policy mindset in which whites and their interests are frequently disprivileged or entirely ignored, the trend has become impossible to overlook.

In March last year the Nobel-laureate Princeton economist Angus Deaton and his wife Anne Case released a study, “Mortality and Morbidity in the 21st Century,” that details how factors like economic downturn and opioid addiction have fed an emotional despair among less privileged whites that has become unhealthy and increasingly fatal.

What the new CDC data shows, however, is that the existing pattern itself is deepening and accelerating, raising the likelihood that the overall crisis and its component parts, like the opioid crisis, will get much worse before matters stabilize and perhaps begin to improve.

That data shows that rural counties are experiencing the largest increases in the suicide mortality rate, where, GOVERNING reports, the rate has risen about 14 percent over the five-year period ending in 2016. However, the suicide death rate in urban areas also increased, by eight percent. And when the data is adjusted for factors like obesity and disability, the population size of a locality becomes much less predictive.

The GOVERNING article states that white men commit suicide “at the highest rates — roughly 10 times that of Hispanic women and black women — because they tend to have greater access to firearms.” But although the availability of guns, like the availability of opioids and alcohol, may contribute to the upward trend in suicide and even create some disparate impact on distinct demographic groups, it is clear that access to firearms by itself fails to account for what Steve Sailer has termed the White Death. 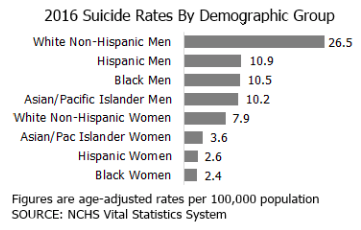 Although the suggestion is likely to irritate proponents of robust Second Amendment rights, it may be true that gun locks, mandated waiting periods, and other measures affect both the rate of gun suicide death in particular and the rate of suicide death overall.

However, dilating on gun control while avoiding a serious discourse of the nature and causes of white despair is becoming impossible, even for media observers who would probably prefer not to so openly sympathize with downscale whites.

This goes to the point specifically emphasized by Professors Case and Deaton–whose paper was twice rejected by well-regarded medical journals before it was finally published by the Brookings Institution–that it simply will not do to ignore the distinctly white dimension of the problem.

Their paper’s initial rejections were so instantaneous “[i]t was almost like the e-mail had bounced,” Deaton told the Washington Post.

The reasons it took so long for their findings to be published are multifold. As Sailer notes,

For one reason, there are virtually no respectable organizations that make it their mission to care about the well-being of whites. Countless government agencies and NGOs scan statistics for evidence that blacks are getting a bad break. But looking out for whites is a good way to wind up on the SPLC’s list of people to hate, so nobody paid much attention to life-and-death trends among 200 million people.

In Case and Deaton’s economic-centered view, beginning in the 1970s a host of factors made it harder for Americans to form families, the social unit that the professors suggest is critical to people’s mental health and central to their self-understood identities.

After the 1960s Americans married at lower and divorced at higher rates, while social trends and pressures in the labor market worsened life even within many families that stayed in tact.

Trends in legal and illegal drug consumption and marketing are also a significant factor. As Sailer summarizes,

First, prescription opioids like oxycodone flooded the market in the early 2000s. When the government then tightened up on painkillers, Mexican cartels stepped in with black-tar heroin. They targeted sleepy white parts of the country because the Mexican drug dealers didn’t want to have anything to do with violent and attention-grabbing blacks.

Although the discussion has shifted in the last year-and-a-half towards greater acknowledgement of the reality of white despair, so far the proposed solutions are often post hoc in nature, rather than designed to address the underlying social, economic, and spiritual factors at play.

The increasing equipment and use of the opioid-overdose spray Narcan by emergency responders is a prime example of this. So is the preoccupation with gun control, and the emphasis on “wellness” and clinical mental health treatment that seems to reflect the broad default response of many governmental and respectable non-governmental organizations.

Several of the interviewees and respondents to GOVERNING’s piece on the subject seem dedicated to such post hoc rationales and solutions:

“It’s not the economics itself but the associated stress that leads to physical or mental effects on health,” says Jill Harkavy-Friedman of the American Foundation for Suicide Prevention. …

Alaska’s five-year plan seeks to prevent suicides through several layers: promoting wellness to lessen suicide risks, improving awareness and understanding of suicide, and strengthening the services and supports provided to a person who is experiencing a mental or emotional crisis. …

And the American Foundation for Suicide Prevention is pushing an approach known as “Zero Suicide” that aims to improve care and outcomes for individuals at risk of suicide in health-care systems. The group is also focusing its efforts on emergency rooms and correctional facilities, two other places where people are at higher risk. The vast majority of suicide victims, in fact, suffer from a diagnosable mental health issue.

“By increasing public awareness of risk factors and warning signs, we can do something to stave off some of the deaths,” says Harkavy-Friedman of the foundation

Improving mental health treatment and the quality of medical care are non-controversial undertakings, which may be why they are attractive objects of focus. But if trends towards white suicide and morbidity are already bad, and data indicates that they are getting even worse, this preoccupation with outcomes rather than causes may be misplaced.

The work of path-setting figures like Deaton and Case invites a focus on longer-range social and economic trends that could be more fruitful. Others whose work is oriented towards the political and historical, like Pat Buchanan, the late Sam Francis, and the late Samuel Huntington, predict and interpret such crises as involving, at their center, matters of civilizational spirit and identity that extend outside the remit of the family unit.

Regardless, greater seriousness and more dynamic leadership is needed if American whites are to undertake a successful turnabout, in their society and within their own minds.