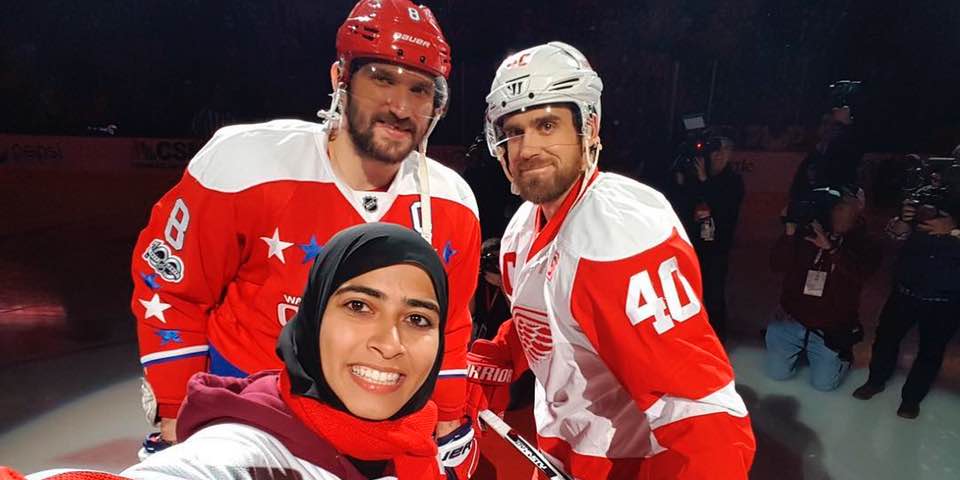 Evan McLaren4 years ago37 comments
Hockey is for everyone--but, in the Current Year, for some more than others

Big hockey tries pleasing SJWs. Let's see how it pays off for them.

It’s February, which means it’s Black History Month, during which the story, struggle and contributions of black peoples are meant to be highlighted and emphasized even more than they are normally. There’s something recognizably natural both in the impulse in favor of such celebrations by blacks and in the fatigued reactions of many whites. Such tensions and disparate sentiments are to be expected in the regular course of multicultural society.

To unreconstructed whites, particular aspects of Black History Month seem particularly inane. Peak black history in this regard is the dutiful reminder that Western civilization would literally not exist were it not for the African diaspora, upon whose inventiveness and creativity our very survival depends.

George Washington Carver‘s blessing of butter made from peanuts, for example, is spoken of as if it froze Europeans in collective awe, their very imaginations shattered by a concept seemingly drawn from another plane of consciousness. And how would whites even be able to conceive of themselves without the guidance of Garrett Morgan, mulatto Prometheus of the traffic light, or the many nonessential modifications to white inventions that black entrepreneurs had the good sense to patent?

It’s not the inventions themselves that merit ridicule–I’m disinclined to forego peanut butter or traffic lights, or to insult their originators–but rather the smarmy, satisfied attitude with which middle-class SJW minds press them upon the public. (And in reality, possibly all of the highlighted inventions arose from the slightly-less-melanated Talented Tenth of the black population, who also appear to dominate institutions like the Congressional Black Caucus.)

Another stock SJW mic-drop rebuttal to the very morality of Occidental civilization is the gross inequity in the fact that recognition of black history was consigned to February, the shortest month. That’s racist!

Amazingly, Europeans managed to conceive of a few worthwhile inventions and ideas entirely on their own. One of my personal favorites is the athletic pursuit of ice hockey. Although there’s some dispute as to whether the Mi’kmaq tribe was playing its stick-and-ball game in what is now Canada before it made contact with white settlers, its independent origins among several different European groups is not seriously disputed.

There are significantly more black hockey players at all levels of the sport than there were even when I played youth hockey two decades ago. Yet ice hockey is still viewed as distinctly white, its popularity highest in Canada, Scandinavia, Russia and Eastern Europe.

Of course, this unbearable whiteness (and straightness) is a difficulty Big Hockey has set its sights on overcoming. This year the NHL selected February as its month to celebrate the ways in which hockey can “drive positive social change and foster more inclusive communities.” It officially announced its campaign with a tweet featuring Washington Capitals goaltender Braden Holtby, who has distinguished himself as a proponent of LGBTQ rights since he visited the home and shrine of gay political icon and martyr Harvey Milk during his honeymoon.

This month, we celebrate how hockey brings people from all different backgrounds together. #HockeyIsForEveryone pic.twitter.com/wMcBdlYvhz

Each NHL team has planned its own manner of advancing the league campaign. The Washington Capitols will host a Pride Night. The Pittsburgh Penguins are sending three of their players to skate with Pittsburgh I.C.E., a program that began in 2000 as “Hockey in the Hood.” The Dallas Stars, whose coach Ken Hitchcock “loves these initiatives,” will honor diversity groups in special ceremonies at their February 16th game against the St. Louis Blues.

These various initiatives mostly strike one as harmless distraction. I’m finding it hardest to complain against the Florida Panthers, who are hosting a series of hockey clinics for legitimate victim groups–children who are disabled, blind, abused, or autistic.

Woe to those who do express disagreement. The Pittsburgh Penguins’ social media squad took one fan to the Twitter woodshed when he declined to embrace the spirit of the multicultural season.

If the cynical motive behind “Hockey Is For Everyone” is for mercantile owners, led by Commissioner Gary Bettman, to get as wide a swath of society as possible buying tickets and jerseys, going out of their way to insult @bigstewo7 on social media might be counterproductive.

And, as we have recently had many occasions to learn, whatever wypipo do to support non-wypipo (or disadvantaged people in general)–short of suicide or some other form of physical sacrifice–it’s completely, embarrassingly, and insultingly wrong. In this case the NHL’s inclusion of a performance by Kid Rock at its All-Star Game renders its present promotion of Inclusion inadequate at best.

Four days ago, you had Kid Rock perform at a league event. Now you’re using a straight white man to celebrate diversity in hockey. Actions speak louder than words, @NHL.

The Penguins were called out on their own empty performativeness, which critics noted is irreparably marred by their visit, last October, to meet the Exalted-Cyclops-in-Chief himself.

The Penguins had an opportunity to demonstrate forcefully that hockey really is for everybody, back in October.

Instead they visited Trump in the White House while he attacked black athletes in other sports.

This is great. Definitely not enough. https://t.co/eaGRRioPkx

This brings us back to Black History Month, whose message the NHL likely intended to complement and amplify when it selected February for its inclusion campaign. Can you guess how that worked out for them?

?the NHL created #HockeyIsForEveryone because they don’t have the ability to acknowledge Black History Month ?

@NHL I’m glad we’re celebrating diversity in all forms BUT couldn’t you have chosen a different month than February? It’s literally the ONE MONTH out of the year dedicated to BLACK history. Why not celebrate the number of AA players instead? https://t.co/zcoO4NuriV

Ah yes, Hockey Is For Everyone Month, where the NHL pretends to give a fuck about every marginalized fan by co-opting Black History Month and asking you to buy more merch, cause that makes sense.

This is just bizarre. First, Kid Rock, then an effort to rebrand Black History Month https://t.co/OBtqwFbORs

?but it’s just a call, w/o action. put your damn $ where your mouth is

?also also why is HIFE month the SHORTEST DAMN MONTH

“hockey is for everyone” being in February makes me super uncomfortable cuz this is black history month and it seems like most hockey fans ignore that. It’s almost like the league is trying to push an issue people care about so people don’t look at how racist the league is ???

This vein of negative reaction found its way into Twitter’s featured news stories, which probably was not the return the NHL was seeking on its virtue-signaling investment. Perhaps next year it will heed the feedback and avoid special February programming, apart from obediently and explicitly sponsoring black history. It will be interesting to note how much distance it puts between itself and Kid Rock’s offensive whiteness in its musical programming for the 2019 All-Star Game, and whether this year’s Stanley Cup winners will accept an invitation to the White House.

Although it’s unlikely, given the quality of the current league ownership, in a sane world the NHL would observe the economic class and ethnic makeup of its devotees, as well as the response of fans of other sports to trends like the NFL’s “Take a Knee,” and move in a different direction–away from its attempt to draft a chronically dissatisfied rainbow coalition into its fan base, and towards an acceptance and even embrace of its traditional white character.