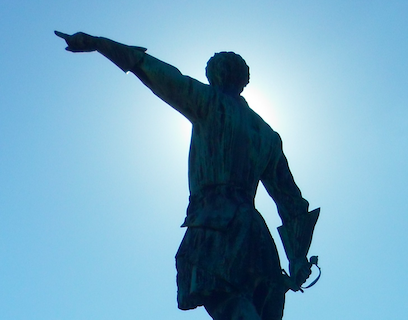 Here is the Alt-Right Almanac for Thursday, February 1, 2018.

On this day in 1713 Ottoman troops attacked an encampment of Swedes at Bendery, now Bender, in present-day Moldova. Before Hitler at Stalingrad and Napoleon at Moscow, Charles XII of Sweden had seen his greater imperial fortunes crushed in June of 1709, at Poltava in what is now Ukraine. After his army was routed there by a Russian force led by Peter the Great, Charles fled with what remained of his troops into Ottoman territory, where he lingered for several years as an exile. His welcome among the Ottomans apparently ran out at Bender, where his force of a few hundred was suddenly set upon by thousands of Ottoman soldiers. Charles was captured, but not before hours of fighting, during which he killed at least one Ottoman with his sword in hand-to-hand combat. Upon his release Charles began planning his return to Sweden.

It’s the birthday in 1969 of journalist Andrew Breitbart in Los Angeles, California. Breitbart was of Irish-American descent but was adopted by a Jewish couple when he was three weeks old. Theologically he was agnostic, but he attended Hebrew school and had a Bar Mitzvah. The notion, introduced to him in college, “that the Israelis were somehow the oppressor in the Arab-Israeli conflict,” did not make sense to him, and he later told a gathering of the Republican Jewish Coalition that “I’m glad I’ve become a journalist because I’d like to fight on behalf of the Israeli people. … You cannot be objective when it comes to right and wrong, and Israel is in the right.” Breitbart was instrumental in the early evolution of sites like The Huffington Post and The Drudge Report and founded Breitbart.com as a news aggregator in 2005. While visiting Israel in 2007 he and attorney Larry Solov embarked on a mission to build the outlet into a news network that would be “unapologetically pro-freedom and pro-Israel.” Breitbart passed away from heart failure in 2012 at the age of 43.

We’ll put a bookmark there in your Alt-Right Almanac for Thursday, February 1, 2018.