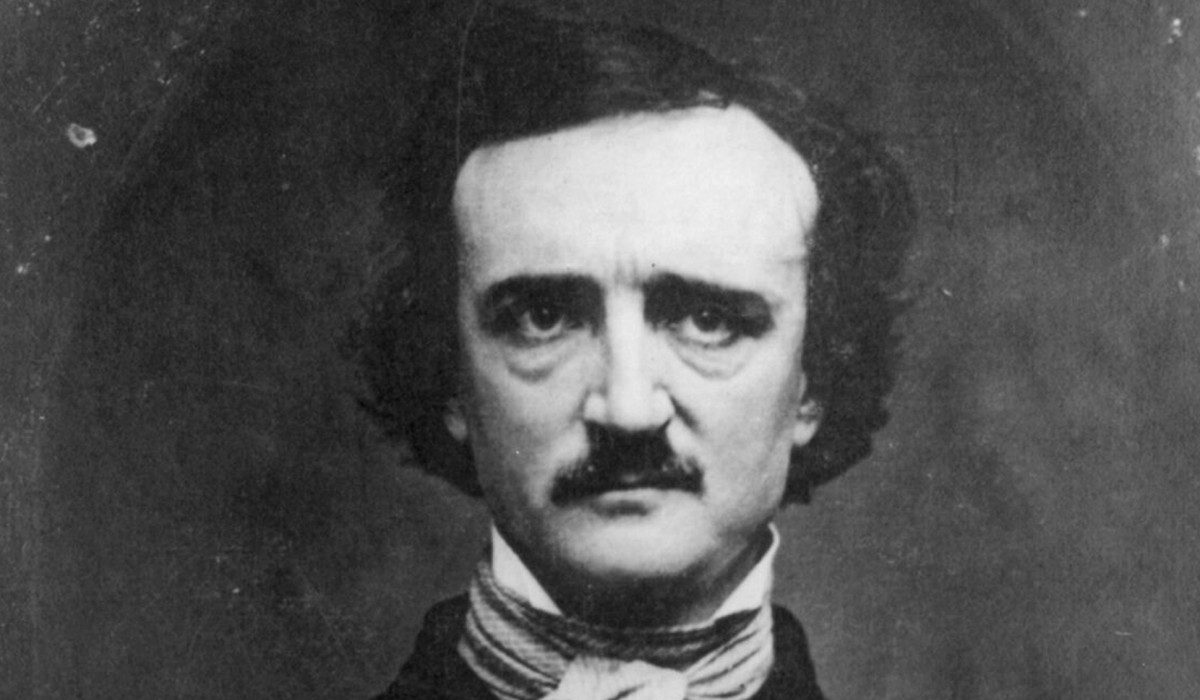 It was on this date in 1845 that the New York Evening Mirror published the first version of the Raven bearing its author’s real name, Edgar Allan Poe. The Raven made Poe into an instant national celebrity but did little to stabilize his desperate financial situation. The poem begins,

Once upon a midnight dreary, while I pondered, weak and weary,
Over many a quaint and curious volume of forgotten lore—
While I nodded, nearly napping, suddenly there came a tapping,
As of some one gently rapping, rapping at my chamber door.
“’Tis some visitor,” I muttered, “tapping at my chamber door—
Only this and nothing more.”

Two years after its publication, almost to the date, Poe’s wife Virginia–who was also his first cousin, and whom he married when he was 26 and she 13–passed away from tuberculosis at the age of 24. In another two years Poe was also dead from uncertain causes after being found wandering deliriously through the streets of Baltimore, in obvious medical distress and wearing a stranger’s clothes. The imaginative, gothic style of Poe’s work was a great influence on later American writers and poets, for example H.P. Lovecraft.

On this day in 1956 the man who wrote the first book in English on Nietzsche, and who defined truth as “something somehow discreditable to someone,” passed away in his sleep at the age of 75. Henry Louis Mencken stands as one of America’s most famous and beloved satirical writers, in spite (or because) of his relentless lampooning of the docile, unreflective national type, “Boobus Americanus.” Mencken’s privately-expressed prejudices against Jews and other nonwhite racial groups are to this day the topic of semi-frequent complaints by academic and media critics, who have declined or failed to wholly suppress his legacy of wit and insight. A misogynist, Mencken said, is “a man who hates women as much as women hate each other.”

It was on this day in 2002 that George W. Bush delivered his first State of the Union address as president, and the first such address since the attacks of September 11, 2001. The address ranks fourth on a Washington Post list of greatest ever State of the Union addresses, set apart by Bush’s clear and definitive call, in the words of Michael Beschloss, “to make the war on terror a worldwide crusade for democracy.” Opposing the United States in its messianic struggle, Bush said, was an “axis of evil” consisting of three principal state actors: North Korea, with its relatively advanced weaponry; Iran, with its aggressive pursuit of the same; and Iraq, with its flaunting attitude and famously-alleged weapons of mass destruction.

Figures of the pre-Alt-Right were less enthused than the Washington Post. Sam Francis wrote that, “despite [Bush’s] chest-thumping,” the Census Bureau had disclosed “that there are now more than 100,000 illegal aliens from the Middle East alone living in the United States,” along with 3 million legal Arab immigrants, all of whom are likely to import their ethnic hatreds and enact, encourage, tacitly welcome or idly observe future acts of terror within our borders. This constituted a second front in Bush’s vaunted War on Terror, Francis wrote, and “the only way to deal with it is to start deporting those who compose it.” In the years since Francis wrote those words the United States has conducted large-scale operations in several Middle Eastern countries that now lie in chaos, triggering a massive refugee wave that continues to trouble Europe. Meanwhile the number of Arabs in the United States, legal and illegal, has steadily increased, year by year.

We’ll put a bookmark there in your Alt-Right Almanac for January 29, 2018.