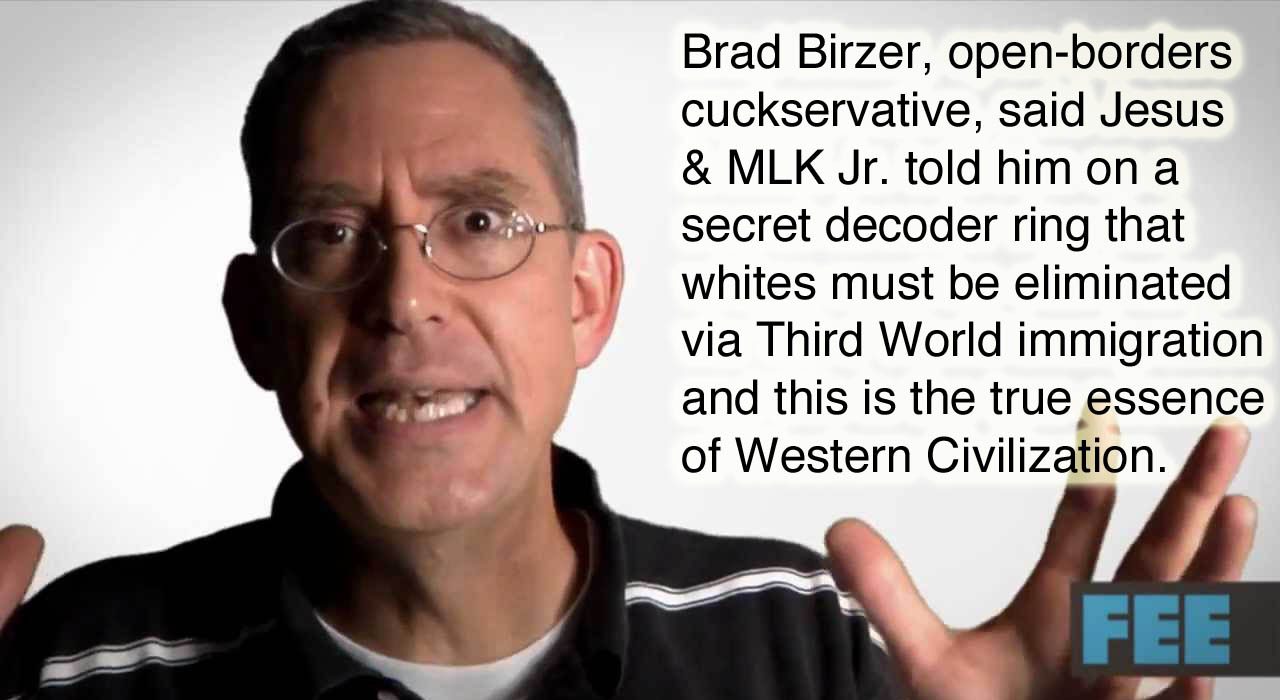 The Cuckservative Vision Of Western Civ.

The Cucks want to preserve "The West" and "Christendom" at the expense of the White race.

Case in point:  A truly embarrassing American Conservative article by Bradley J. Birzer, “Bring on the Conservative Debate for Immigration,” wherein Brad basically argues that the entire telos of Western Civilization is toward open borders. Seriously.  I’m not making this up.

I had never heard of Brad Birzer before reading this article, but apparently he teaches at Hillsdale College. I asked some academic friends about him and the two responses were: “major cuckservative” and “not very bright.” Both are probably true.  Nonetheless, I’ll use his article to illustrate the cuckservative mindset and what’s wrong with it.

Brad Birzer’s article may well be one of the  most historically illiterate pieces I’ve ever read.  He writes:

In the gloriously pagan Odyssey, Odysseus survives, again and again, because the highest commandment of Zeus is to welcome the stranger and protect him with all that one has. To this day, one finds remnants of this tradition throughout the Mediterranean as the stranger is greeted with olive oil, bread, and, depending on the predominant religion of the region, wine. As staple crops of the ancient world, these signified not just acceptance but actual joy at the arrival of the stranger. The god of the hearth stood as patron of the sojourner.

The Athenians, during the tumultuous fifth century before Christ, prided themselves on allowing not just the stranger into their communities, but also their very enemies in.  After all, what did the Athenians have to hide? Why not expose the ignorant to truth? Let the oppressed see how a free people live.

During the vast, long expanse of the Middle Ages, the Germanic peoples not only thought of themselves as residents of their own little piece of Middle-earth (Midgard), but they also thought of themselves as citizens of what King Alfred the Great labeled Christendom, the Christiana res publica, as well as believing themselves sojourners en route to the City of God. What Christian could allow—in good conscience—the accidents of birth such as gender or skin tone in this Veil [sic] of Tears to trump the possibilities of eternal salvation in the next?  Neither Greek nor Jew, neither male nor female. . . .

This puerile diatribe is just flat-out wrong on so many accounts.

First, the language he uses, such as “welcoming the stranger” and “sojourner,” is right out of  cuckstianity. Brad, I’m told, is a big “Cathocuck” and virtue signals non-stop like an SJW.  The fact that he uses these phrases shows he’s more interested in current liberation theology than in traditional Western thought.

Brad’s reading of the Odyssey is ridiculous. The Greeks valued xenia (hospitality), but it had limits. The Odyssey is, in fact, a reflection on these limits. Throughout the Odyssey, there is either too little hospitality (e.g. the cyclops, sirens, etc.) or too much hospitality (e.g. Calypso, Penelope and the suitors, etc.).  Odysseus tries to steer between these two extremes and find a mean.    Interestingly, the poem does not end on the note of “welcoming the stranger.”  Odysseus, in fact, murders all the suitors that invaded his island. (I suspect if Brad Birzer were Odysseus, he would have asked the suitors to stay and would have raised the kids they would have with his wife.)

In short, the Odyssey is not a screed arguing for unmitigated hospitality or open borders.  Only an extreme ideologue would read it this way, which makes me wonder whether Brad read the poem at all; if he did, he seems to have failed to understand it.

The Ancient Greeks were not SJWs, as Brad makes them out to be. They referred to foreigners as “barbarians” and in many Greek city-states, it was nearly impossible for foreigners ever to obtain citizenship. (In some city-states, in order to be a citizen, one had to prove citizenship on both the paternal and maternal lines back for two generations.)  Furthermore, there was an ethno-religious component to city-states.  Ancient paganism was a blood (not a creedal) religion and citizens saw themselves bound by blood to each other, to the gods, and to the state.  Aristotle, in the Politics, notes city-states being of the “same blood” and at one point defines city-states as “blood connections of families, brotherhoods, and common sacrifices.” Aristotle goes on to say:  “A state cannot be constituted from any chance body of persons, or in any chance period of time. Most of the states which have admitted persons of another stock, either at the time of their foundation or later, have been troubled by sedition.”

Even the Romans did not grant mass citizenship to foreigners until the Edict of Caracalla in 212 AD.  By that time, Rome was already in decline and this edict hastened that decline, as later is demonstrated when Rome’s foreign, mercenary armies begin to loot the empire from within. The British historian Peter Heather argues that mass immigration was what finally brought down the Roman Empire.

Things get worse when Brad moves to the Magna Carta.

Nothing in Christendom better represented the ideals of the free movement of peoples than did the Great Charter of 1215, forced upon King John at Runnymede.  Though points 1 and 63 of the Magna Carta demanded freedom of the Church from political interference, points 41 and 42 reveal how fundamental the movement of peoples is to the sanctity of the common law.

If we accept the Magna Carta as one of the most important documents in the history of western civilization, we Americans cannot afford to ignore it, its intent, or its specifics.  Common law demanded that a people—and the person—move freely, border or not. Even in time of war, the enemy must be treated with dignity.

Obviously, points 41 and 42 are referencing travelers and merchants selling goods—not immigrating seeking to become new subjects. Indeed, it’s ahistorical (not to mention childish) to conflate, on the one hand, subjects and citizens and travelers with immigrants. Moreover, the notion that the Magna Carta is a template for multi-racial inclusiveness and open borders is truly bizarre, when just 75 years later King Edward I issued the Edict of Expulsion (1290), deporting all the Jews from England.

When it comes to the specifically American tradition of immigration and the free movements of peoples, the issue becomes more complicated.

Imagine for a moment that the great waves of immigration never came to America.  In the colonial period, among those who freely chose to cross the Atlantic, you would have to dismiss the Anglicans to Virginia, the Puritans to New England, the Quakers to Pennsylvania, and the Scotch-Irish. Of the unfree peoples, you would have to take out all of those of African origin. In the 1840s, remove the Germans, the Scandinavians, and the Irish.  In the 1880s through the 1910s, remove all Greeks, Poles, Jews, Italians. . . .

Yes, the native American Indian population would be justly celebrating, but, overall, and, from any relatively objective view, there would be no America.

Between 1801 and 1924—with the critical exception of the Chinese and the Japanese—no peoples were barred from entry into the United States.  Congress forbade further Chinese immigration in 1882, and a gentleman’s agreement ended Japanese immigration in 1905. Otherwise, until 1921 and 1924, any person of any continent, of any religion, of either gender, of any skin color, or any other accident of birth could enter the United States and take up residency the very day of arrival.  Only those with known criminal records or those suffering from tuberculosis were turned away.

Unless you are a full-blooded American Indian (less than one percent of the present United States population), you, American reader, would not be here without some ancestor having immigrated—freely or by force—to the United States. And possibly from what one might crassly dismiss as a “sh-hole country.”

Brad fails to mention the the Naturalization Act of 1790, which limited citizenship to white people of good character.  He also fails to mention how the Immigration Act of 1924, which limited immigration to Europeans and lasted until 1965, actually created a tight labor market and, as many economic historians have argued, created the largest middle class in American history.  (I suppose Brad sides with the open-borders, cheap-labor corporations that want loose labor markets to drive down wages.)

And, of course, Brad makes recourse to religion:

As Christians around the world celebrated the arrival of the Three Kings—the Magi of the Orient—on Epiphany, the president of the United States called for $33 billion to shore up America’s borders with $18 billion for the wall.

Would the Magi have been admitted in 2018? “Excuse me, Balthasar, but I need to see that your papers are in order.  Oh, I’m sorry, but your gift of myrrh exceeds our 3.2 ounces of liquid allowed.”

Perhaps, President Trump simply chose his timing poorly, but it would be impossible for the Christian to miss the irony.

Brad’s use of Christianity is largely through the lens of contemporary SJW Cuckstianity where Christianity is to be a suicide cult for white people. Historically, Christianity was not always a suicide cult.  Christian nations policed their borders and repelled invaders. Even Thomas Aquinas says people have greater obligations to compatriots and blood relatives than to foreigners.  If Brad were alive at the time of Charles Martel, Brad would have tried to convince Martel to “welcome the stranger” (and then Martel would have bitch-slapped him).

Brad keeps referring to “skin color” or “skin tone” as if race is only about skin color, when in reality race is 100,000 years of evolution and encompasses many behavioral traits.  Brad really needs to read up on human biodiversity, about which I suspect he’s completely ignorant.

In conclusion, Brad has no idea what he’s talking about.  Either he’s a fool or liar, or both.

Mind you, most of my criticisms here are merely academic and show how ridiculous Brad’s historical claims are.  Even if the West were truly open-borders in the past, it would not justify open borders now, as the scale of immigration now is so much greater than in the past and most of the immigration now is from the Third World.  As a recent study in the UK showed, “More people came to the UK in 2013 than from 1066 to 1960.”  The “movement of peoples” is unprecedented.

As an aside, Brad has written a book on Russell Kirk, whom many credit as being the grandfather of American conservatism.  Interestingly, Kirk defended racial segregation in the South, apartheid in South Africa, and at the end of his life became an immigration restrictionist.  Kirk also quipped that Jewish neoconservatives “mistook Tel Aviv for the capital of the United States.”  Brad, of course, hates all of this, and wishes to cuck-wash conservatism, which is funny considering that conservatism has already run its failed course and is a dying ideology. Let’s hope something like archeo-futurism or identitarianism replaces it. Soon.

Read Ricardo Duchesne’s “The Greek-Roman Invention of Civic Identity Versus the Current Demotion of European Ethnicity.”

Topicschristianityimmigration
Share on FacebookShare on TwitterShare on RedditShare on VKontakte