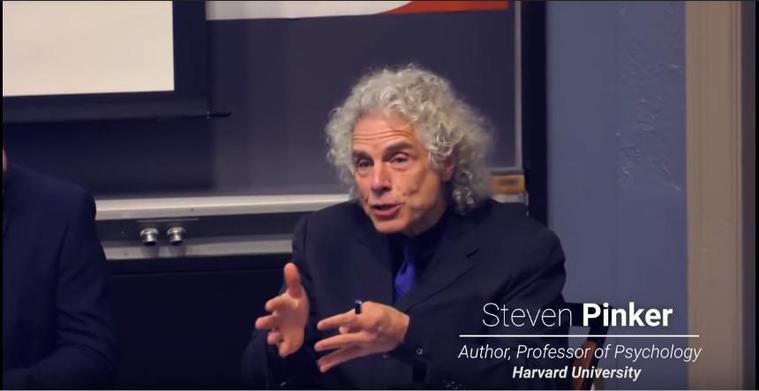 Turns out we have our admirers in the hallowed halls of academia.

In a recent panel discussion from Spiked Magazine’s Unsafe Space Tour, Harvard psychology professor Steven Pinker became an unlikely ally of the Alt-Right and the movement.

The talk was titled “Is Political Correctness Why Trump Won,” and focused on the practices of the Left and the effect on those trying to decide where their political loyalties lie.  While Pinker made his opposition to Trump clear, he went on to elucidate why people are turning towards the Right with such a fervor.  He described such individuals as:

“highly literate, highly intelligent people who gravitate towards the Alt-Right, internet savy, media savy, who often are radicalized in that way, who ‘swallow the red pill’ when they are exposed for the first time to true statements that have never been voiced in college campuses, or the New York Times, or in respectable media.”

Shortly after, he listed some basic, undeniable truths that the Alt-Right aren’t afraid to discuss and the Left deny and ignore at their own risk:

1. Capitalist societies are better than communist ones.

2. Men and women are not identical.

He explained these truths to an initially skeptical audience, highlighting the obvious qualitative difference between South Korea and North Korea, between West Germany and East Germany.  He noted the repeatedly different responses from between men and women in terms of life priorities, sexuality, tastes and career interests, etc.  He cited the Bureau of Crime Statistics and the fact that African-Americans commit crimes at 7-8 times the rate of European-Americans.  He made it clear that the vast majority of suicide terrorist attacks across the world are committed by Islamist extremist groups.

These facts are routinely discarded and demonized by the Left, and that is helping to “red-pill” the people who know better who are turning increasingly to the Right.

The professor sured up his credibility amongst the liberal audience by claiming the Alt-Right’s conclusions on these matters were “repellant,” yet he offered no credible argument as to why this was the case.  Using several straw-men and outright falsehoods, Pinker failed to refute any of the Alt-Rights core assertions.

All he did was suggest that the left tone down the rhetoric and start coming up with clever replies to Alt-Right agitprop instead of just trying to OY VEY SHUT IT DOWN all the time. Will it work? Probably not. Everyone there was shifting uncomfortably in their seats at the very mention of the existence of the Alt-Right. Chances are, they won’t listen to the clever professor’s plan to innoculate young people against Alt-Right agitprop.

Still, what this liberal professor had to say about the political landscape provides valuable lessons for the Alt-Right.  People are thirsty for these truths that we provide.  As long as the Alt-Right stays away from reckless behavior and focuses its energy on what they can prove and on basic truths, the better the movement will be able to recruit individuals and enact its political goals in the future.

Because in the end, we’re really just saying some basic stuff that’s so undeniably true, future generations will be amazed at how far from common sense our society was capable of straying.