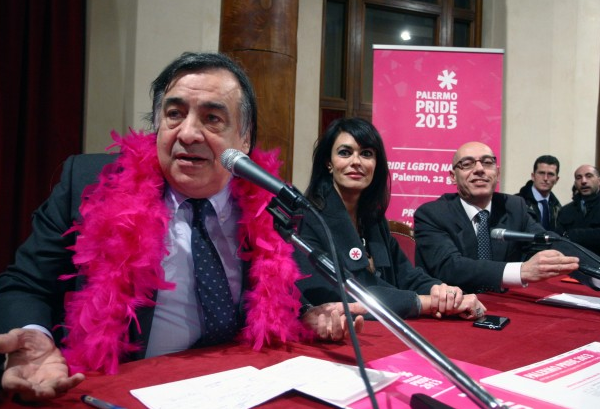 Italian Mayor Thinks It’s “Beautiful” To Be “Invaded By Migrants”

The Mayor of Palermo states that “Google and Ali the migrant” are the future.

It seems each day brings forth new displays of a governing elite totally removed from its people.

This time, it’s the mayor of Palermo, the capital city of Sicily.  This area of the Mediterranean has seen waves upon waves of third-world migrants flooding the shores, posing as refugees, and taking over communities.  The citizens of Italy are outraged, but their leaders view the nightmare as a dream come true.  As mayor Leoluca Orlando put it, “a very beautiful thing happened, we were invaded by immigrants.”

In his opinion, there is no such thing as an Italian, a Sicilian, or a native Palermo citizen.  The future belongs neither to national businesses nor to the Italian people.  Instead, as he openly stated, “the future has two names: Google and Ali the immigrant.”  As Google, an avidly multicultural company, is in the midst of being sued for systemic discrimination against white males, it makes perfect sense that Palermo’s mayor would choose them as the corporation to lead the replacement of Matteos with Mohammeds.

The mayor’s candid views stand in stark contrast to those of the Italian people.  According to Pew Research, 77% of Italian citizens disapprove of the overall handling of the refugee issue, only 17% approve.  60% believe incoming refugees will increase the risk of terrorism, only 28% disagree.  65% consider certain groups of refugees, namely Syrians and Iraqis, as a “major threat.”  Though diversity is being shoved down everyone’s throat by the European Union, the media, and the political classes, 53% of Italians are wholly opposed to the idea, believing diversity makes Italy “a worse place to live.”  Only a mere 18% of Italians think diversity is an improvement.

So how is it possible that there’s this colossal divide between the people and their politicians?  Isn’t Italy a democracy?  The theory and promise of this system is that the will of the citizenry shall be voted on and implemented.  Yet it seems the people of Italy have been discarded, and the only agenda taking root is that of the utopian elite, the media, and lifelong political hacks.

This phenomenon highlights an eternal flaw of civic nationalism, classical liberalism, Americanism, liberal democracy, etc.  These ideologies place all of their faith in inanimate political systems, without any interest in who is running these systems.  How useful are human rights when your town is being overrun by migrant rape gangs and thieves who don’t believe in them?  What good is the Constitution when any leftist 9th Circuit judge can overrule it, costing you millions to reclaim your rights in court?  If the Left ever takes over the Supreme Court, the Constitution will do nothing to save you.  And voting?  Your vote only changes which elitist center-left or center-right party is going to ignore you and the interests of your family.

Ideas like civic nationalism are noble, but they’re ultimately hollow due to this naivé love of systems and refusal to talk about people, culture, and identity.  If their perfect system is ever overtaken by the corrupt and the disloyal, as is currently the case, that very system becomes the means of their own disenfranchisement – as much of an existential threat to the people as is anarchy.

That said, despite the dejection one may feel when reading about this topic and the treasonous comments of the mayors in the West, there is a silver lining.  There is hope.  The elite’s agenda, of replacing the European people they can’t control with new migrants they can, relies heavily on the public’s ignorance.  With the rise of social media, nationalist movements, and the Alt-Right, the elite has been forced to make their awkward arguments out in the open, where they likely will not stand up to scrutiny.  No people goes willingly towards their own extinction.  The rhetoric from mayors like Orlando may get worse, but this does not symbolize the end for us.

It may mean we’re steadily approaching the end for them.