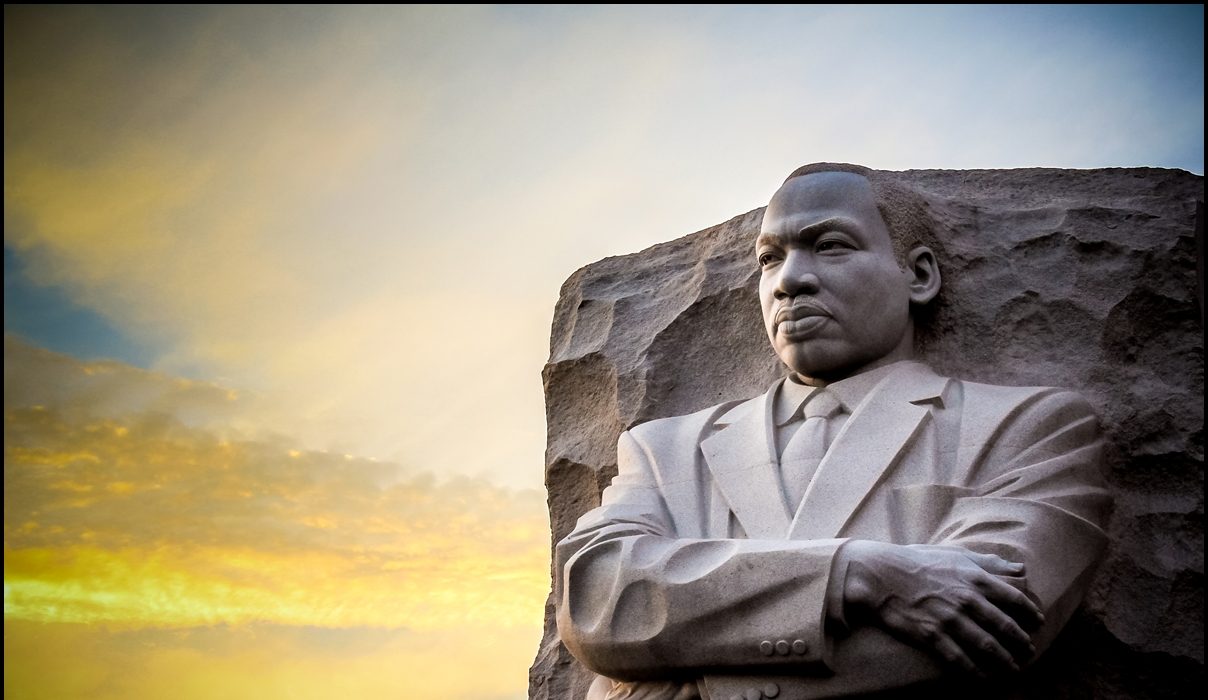 The God Of White Dispossession

Conservatives might think it cute to quote some of King's more libertarian utterances back at liberals, as a form of “PC Judo.” But in the end, they will be the losers of such a gambit.

“MLK Day” has become the high holy day of the American liturgical calendar. No other statesman, not Washington, Jefferson, or Lincoln, is deemed worthy of a holiday all to his own. And no other national holiday seems to carry such relevant, pressing meaning for Americans as the third Monday in January.  The 4th of July has become an excuse for a backyard barbecue. The MLK anniversary, on the other hand, inspires Americans to ask who we are and what our higher ideals should be.

NPI’s co-founder, Samuel Francis, who was active in the debates about the institution of the holiday in mid-’80s, recognized then that the significance of Martin Luther King Jr. stretched far beyond the legal and political technicalities of the Civil Right Act.  The celebration of the man represented a great change in how Americans understood their nation.

[T[he true meaning of the holiday is that it serves to legitimize the radical social and political agenda that King himself favored and to delegitimize traditional American social and cultural institutions — not simply those that supported racial segregation but also those that support a free market economy, an anti-communist foreign policy, and a constitutional system that restrains the power of the state rather than one that centralizes and expands power for the reconstruction of society and the redistribution of wealth. In this sense, the campaign to enact the legal public holiday in honor of Martin Luther King was a small first step on the long march to revolution, a charter by which that revolution is justified as the true and ultimate meaning of the American identity. In this sense, and also in King’s own sense, as he defined it in his speech at the Lincoln Memorial in 1963, the Declaration of Independence becomes a “promissory note” by which the state is authorized to pursue social and economic egalitarianism as its mission, and all institutions and values that fail to reflect the dominance of equality — racial, cultural, national, economic, political, and social — must be overcome and discarded.

By placing King — and therefore his own radical ideology of social transformation and reconstruction — into the central pantheon of American history, the King holiday provides a green light by which the revolutionary process of transformation and reconstruction can charge full speed ahead. Moreover, by placing King at the center of the American national pantheon, the holiday also serves to undermine any argument against the revolutionary political agenda that it has come to symbolize. Having promoted or accepted the symbol of the new dogma as a defining — perhaps the defining — icon of the American political order, those who oppose the revolutionary agenda the symbol represents have little ground to resist that agenda.

Sam is all too correct that “MLK writ large” has become the foundation of American identity; in many ways, the situation is far worse than the one he depicted in 1998.

At the time, Sam described a pitched battle between MLK’s egalitarian “Dream” and “traditional American social and cultural institutions,” which he describes, in Cold War language, as “anti-Communist foreign policy,” free-markets, and the Constitution.

What Sam might not have grasped in 1998, but understood fully later, is that by the turn of the 21st century, the MLK counter-culture was (and is) the Establishment. There are precious few “traditional American social and cultural institutions” that do not honor MLK or treat “The Dream” as informing their missions.

And this is not solely the case for the more overtly liberal ones like the Department of Education. No less a putative bastion of conservative values than the U.S. Army is led by men like Four-Star General George Casey, who in 2009, in response to a Muslim Army Major who murdered 13 of his fellow soldiers as an act of jihad, averred,

MLK unites the Left (tactical disputes between Malcolm X and the pacifist reverend have long since gone by the wayside). And in a strange way, he unites the Right as well. “Judged By The Content Of Their Character” is the central (if not sole) argument against multiculturalism and affirmative-action offered forth by self-styled “conservatives.” And King is counted as an American icon and hero not only at left-wing and liberal gatherings but at those of the “Religious Right” and Beltway Republicans.

Glenn Beck—who, in his radio and television programs and mass rallies, has created a kind of religion of MLK—might actually turn Sam’s polemic on its head and claim that MLK is the hero of American foreign policy and Constitutional government. And he would, in a sense, be correct—even in the matter of foreign affairs. Washington’s violent incursions into the Middle East are invariably accompanied by promises that all shall vote, women shall attain undergraduate educations, and minorities shall be empowered.

Despite conservatives’ wishful thinking, The Dream—in all its manifestations—is the antithesis of a free society. Government’s enforcing that all people and businesses make judgments non-racially is, in itself, a totalitarian notion and has, in fact, resulted in a massive interventionist infrastructure and bureaucracy. (Rand Paul tepidly hinted at as much during his 2010 Senate campaign.) The costs of the industry of “civil rights” and “diversity training” in the workplace can be measured in the hundreds of billions, if not trillions, per year. (And pace conservative revisionism, the actual Martin Luther King Jr. unequivocally advocated most all of the measures done in his name.)

More deeply, “non-discrimination” as a value is the enemy of all tradition, not just the Anglo-Saxon American society it has helped destroy. The version of The Dream that conservatives like—that of interracial hand-holding and vague libertarianism—is ultimately a vision of race-less, family-less, class-less, history-less individuals, happily experiencing equality with other individuals of various shades, all integrated by the marketplace and government. Tradition is, at its root, about being a part of something larger than oneself. The Dream is about becoming a self-contained atom.

Conservatives might think it cute to quote some of King’s more libertarian utterances back at liberals, as a form of “PC Judo.” But in the end, they will be the losers of such a gambit.
Martin Luther King Jr., a fraud and degenerate in his life, has become the symbol and cynosure of White Dispossession and the deconstruction of European civilization. We shall overcome!

This essay was first published on January 20, 2014, at RadixJournal.com and NPIAmerica.org.

TopicsMLK
Share on FacebookShare on TwitterShare on RedditShare on VKontakte