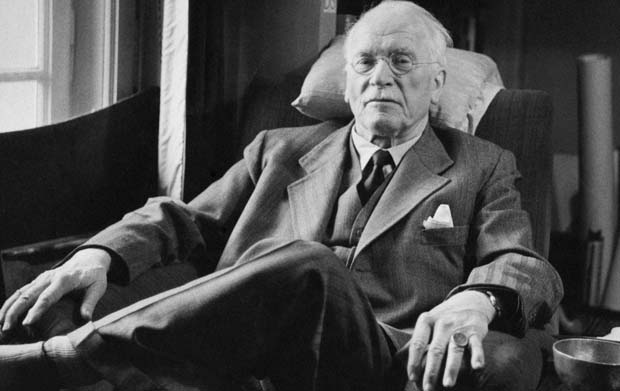 The visionary psychoanalyst would feel right at home among us.

C.G. Jung, protege of the father of psychoanalysis Sigmund Freud, is a man who has been proven to be a visionary. When one reads Jung, they simply cannot help but feel as if they are sharing the same amazement Dante felt as Virgil guided him through the layers of Hell. That isn’t to say reading Jung is a hellish experience, but, rather, an experience akin to walking hand and hand with a divine spirit guide who knows the terrain of which no mortal man before him has dwelt; the terrain, not of hell, but of the unconscious human mind-the space which harbors all of the human spirit’s most deeply rooted secrets. Venturing into that very space, I posit, is necessary for the identitarian movement to reach Truth so fundamental as to be undeniable. Only then will the movement attract the masses to spring forth and join the revolution.

For of all the deep and complex history of all the world’s revolutions, this one fact remains simple: there are merely two roads to revolution, one paved with Truth (that great cosmic stuff that only lives within the hearts of truly heroic men), the other paved with lies.

Only Truth may lead to a revolution worth fighting for. Jung, as it just so happens, is a man who was a purveyor of powerful Truth-Truth. He taught that one cannot truly experience being without knowing one’s roots. These roots, Jung propounds, reveal themselves in the unconscious mind through various symbols.

Jung’s subject matter regarding the unconscious mind runs the gambit, but what really sticks out, and where great grains of Truth lie, are within the notions of Anima vs. Animus-or, the inner woman vs. the inner man. The clairvoyant way in which his ideas could serve as a line for line tracing of today’s sociopolitical picture is, to say the least, both startlingly accurate and amusing.

According to Jung, the Animus can manifest in both positive and negative ways, and is the second half of the male vs. female dichotomy of the unconscious mind;  this dichotomy plays a direct role in how the Self forms. The focus here will be the Aniums negatively manifesting itself within women. Jung states,

“The male personification of the unconscious in woman -the animus- exhibits both good and bad aspects, as does the anima in man. But the animus does not so often appear in the form of an erotic fantasy or mood [as the anima does in men]; it is more apt to take the form of a hidden ‘sacred’ conviction. When such a conviction is preached with a loud, insistent, masculine voice or imposed on others by means of brutal emotional scenes, the underlying masculinity in a woman is easily recognized. However, even in a woman who is outwardly feminine the animus can be an equally hard, inexorable power. One may suddenly find oneself up against something in a woman that is obstinate, cold, and completely inaccessible.”

To anyone that is even remotely familiar with today’s political landscape, that snippet will seem as if Jung had gone to any number of left-wing protests, observed 21st-century feminists in action, then used them to elucidate his theory on how the animus negatively manifests itself. That, however, is far from the truth. Some of Jung’s theories are over one hundred years old, yet you can see how telling and relevant they are today.

Does the modern feminist not hold her left-wing views on immigration, racism, the evils of banking, and toxic masculinity as that “sacred conviction” that Jung mentioned? Is it not plausible that, indeed, these views have become just as dogmatic and, to the modern feminist, axiomatic as religious views? After all, Man is a religious animal first, and a scientific one by mere conditioning. Religious views, by the way, that for thousands of years were the only sacred beliefs allowed to be held lest ye be burnt at the stake. In a secularized, widely non-religious America, we now see that man has not yet shaken his nature, his religiosity, nor his absolute necessity to hold sacred convictions. Our women are out in the streets bearing their religious bones and calling it protest.

Is it not, also, self-evident that modern feminists, if not all left-leaning women, are indeed taken over by something cold and obstinate? Language of such a ghostly nature may be deemed necessary in the face of such horrors. Many of today’s men have looked upon these women, these bull dikes and green haired freaks( amongst who are some salvageable, intelligent women) , and genuinely asked themselves, “What has gotten into them?” As if a demon had grabbed a hold of these women’s precious, delicate souls they scream and create “brutal emotional scenes”. I posit, gentlemen, that the negative animus has taken hold within the depths of the unconscious mind. The reasons are as follows; Jung continues,

“One of the favorite themes that the animus repeats endlessly in the ruminations of this kind of woman goes like this: ‘The only thing in the world that I want is Love- and he doesn’t love me’; or ‘In this situation there are only two possibilities- and both are equally bad.’ (The animus never believes in exceptions.) One can rarely contradict an animus opinion because it is usually right in a general way; yet it seldom seems to fit the individual situation. It is apt to be an opinion that seems reasonable but beside the point.”

Again, Jung brilliantly posits a notion that seems to be ripped from 21st-century reality.

These women are predominantly, of course, atheist. Therefore they have not found even the most basic form of love all Americans prior to the 1960’s received: The presumed love of Christ given to Christians-protestant or otherwise. So they find themselves in a loveless position that their conservative, more level-headed, female counterparts do not feel mired in. And yet they desire love all the same.

Lest we forget the reality of radical, anti-American, feminist life today, one must mention these women look at the world from a scientific materialist perspective. Thusly they do, as Jung said, find themselves in a “situation where there are only two possibilities and both are equally bad”.

One is that the world is a place where suffering is built into the very foundation of being, humans are subject to both their own natures and to the environment, but cannot be their own slaves, and that forevermore the world will be such a place. There is no God to love them, no God to provide them with guidance, meaning, or purpose.

The other is, more or less, the exact opposite worldview, but still without God; the world is a place of suffering not because it is built into the very foundation of being, but because we have yet to implement the correct society. In this situation humans are all nurture, no nature, and, thus are akin to balls of clay. We can will ourselves to do anything regardless of our natures, and the world is only bad for now (this is obviously the Marxist worldview).

In any estimation, for these women, the fact that both situations acknowledge that the world causes them pain now means that the feminist’s unconscious mind would adopt the notion that “In this situation, there are only two possibilities- and both are equally bad”, thus the unconscious mind identifies with the negative animus.

“….he represents a particular form of the animus that lures women away from all contacts with real men. He personifies a cocoon of dreamy thoughts, filled with desire and judgements about how things ‘ought to be,’ which cut a woman off from the reality of life.”

Sometimes in life, the stars align for a moment…a moment so beautiful one cannot help but wonder whether or not there really is a hand guiding us all. This, a time in which reality becomes so clear as to be comical, is one of those moments.

The “real men” that Jung is referring to are you; men who have principles…men who have a sense of tradition, a sense of where they are from, and a sense of who they are. This is the importance of heritage and of history! So that we may know where to go next! For it is only a man that knows where he is from, a man that recognizes the harsh, cold nature of reality, that can lead a woman, swiftly and with steadfast resolve, through the muck of the coldest, darkest winter nights. A real man knows how to navigate through the world because he has a sense of spirit that gives him direction.

Women today are, indeed, “…cut off from the reality of life” as they march in the streets screaming vagueries about “how things ‘ought to be’”. This is where the men of the Alt-Right come in. We have all seen it before. A leftist woman doesn’t want to lay with a cuck, faggot who stands for vague platitudes fed to him by the mainstream. She wants a man who thinks for himself, who stands up tall with his shoulders back, and proudly, amongst the harsh, numbing winds of the political wilderness, stands for something True.

These truths, as we begin to unpack them, may strengthen the conviction of a man not ashamed to be white while simultaneously freeing white women from the chains of the negative animus, thus bringing them back to “the reality of life”. Those tight, constricting chains, it’s sad to say, have been placed on them by the progenitors of a marxist, multiculturalist agenda that seeks to destroy the West. And so the Alt-Right must stand for Truth; Truth so profound as to be undeniable. Only then can we begin to break through to those starving for ideas greater than themselves-ideas that, perhaps, have come from a place no mere mortal can fully ever understand.