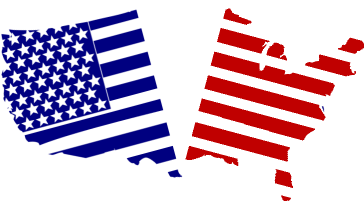 The Divided States Of Weimerica

America wants to come apart. We should give it what it wants.

The center has not held.

If we are being generous, about two-fifths of that 35 percent is comprised of moderate Republicans who occupy what might be termed the political center.

They are actually not so moderate generally (they are essentially neo-feudalists) but they know how to get along with the left and more than anything else they know how to get their way (usually through graft). They are labeled “moderate” because they serve the interests of the power structure and so in return, the power structure gives them favorable press, in this case, a pleasant albeit inaccurate label which makes them seem reasonable and safe to the average voter.

12-15 percent of the country is comprised of left-leaning centrists who generally vote Democrat but will also vote for more moderate Republicans. This is a rapidly disappearing species of citizen because the totalitarian hard-left, which has come to dominate and control the political left, no longer tolerates dissent. The other 25 percent or so of the nation is so damned pissed off and disillusioned with American politics that they don’t vote and they don’t believe there is any real or democratic solution to the nation’s most critical problems.

Their politics by and large aren’t worth pinning down or accurately describing. However, what can be said definitively about that 25 percent of disillusioned Americans is that their numbers have grown over time and they are not moderates, by any stretch of the imagination. 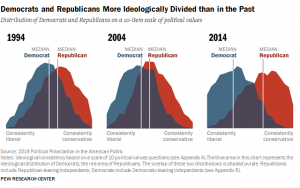 The true center has shrunk and is continuing to shrink. Much of the right is moving away from the artificial center dominated by the interests of oligarchs, lobbyists, and special interest groups, and toward the paleocon right and the Alt-Right, factions of the right more concerned with the interests of ordinary people and less willing to play nice with a power structure deeply hostile to white people.

At the same time, the political left has become more extreme if you can believe it.

The number of radical leftists, antifags and bona fide communists that is, is continuing to grow, and their tactics have become increasingly radical, violent and shocking. The left-leaning centrists in the middle (the 12-15 percent mentioned, think the Dave Rubins and Peter Thiels of the world) are increasingly under siege. Very few Americans seem to even possess the intellectual firepower and acumen to be able to hold their ground in the middle anymore. To the radical left, which dominates the media and the American sociocultural zeitgeist, left-centrists (AKA actual “liberals”) are now seen as simply “enablers” of white supremacy and a bunch of other fictive hobgoblins that only exist in the wildest imaginings of mentally disturbed Cultural Marxists.

Our society is tearing at the seams. We are not held together any longer by shared genes or shared values or shared interests, or anything shared really. We have fewer and fewer natural bonds. We are a society increasingly at each other’s throats, a society of the polarized and the disaffected. Most Americans understand somewhere in their tortured, shallow souls that something is deeply, horribly amiss with our society. At one point the chiefly contented centrists likely constituted a solid 50 percent or more of the American nation. That is no longer the case. Now their numbers, when aggregated (comprised of moderate Republicans, 14 percent, and center-leftists, at most about 15 percent of the country), are under 30 percent of America, and that number is shrinking by the day. 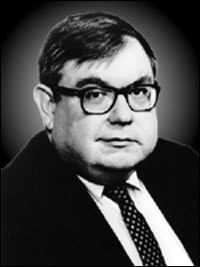 Truth be told, America is now held together by government force and political inertia, which is to say that we have been a nation and so we continue to be a nation. It is not in the interests of white people that America continue to exist in anything resembling its current form.

That is because the Cultural Marxist left took over America many decades ago, in the 1960s to be precise. Since then whites have essentially been hostages in the nation our ancestors built.

A diverse society is an un-society. A society is about shared values, shared genes, a shared worldview, etc. A society defined by opposing worldviews and divergent, hostile races is not a society. It is a society begging to be and in all likelihood soon to be broken up. A house divided against itself can not stand. Nation-states are coordination agreements, alliances between people. We enter into them when we think allying with this person or that group gives our genes the greatest likelihood of survival. It is virtually impossible to see how the modern West does that for whites. How does importing hordes of hostile, unskilled 3rd world primitives, completely unfit for the modern world, increase our probability of survival? People who are genetically unlike us don’t want our genes to survive, they want their genes to survive.

We also enter into these agreements when we believe other people or groups share our vision for tomorrow. This ensures domestic tranquility and maximizes the likelihood that our vision of the ideal society will be the society we find ourselves living in later.

To tether one’s destiny to those who share nothing with you is not rational, it is to destroy oneself by design.

A functioning society needs a center. It needs some axis that keeps it stable, balanced. A healthy society must be able to handle some disagreement, but no society can handle too much of it and remain a society. Too much diversity, ethnic or ideological, is inherently destabilizing. There will always be outliers and dissenters to be sure, but when radicalism becomes the norm you have a problem. The distribution of ideologies in a stable, healthy society should look something like a bell curve, not a bimodal (double hump) curve with extremely prominent peaks separated by an empty center. Ordinary Americans never truly believed in the center the left was striving to create, but acquiesced to the artificial center of the Cultural Marxist left so long as America was economically and socially stable.

However, as the sick Cultural Marxist vision for America has come to fruition, with all its manifest evils and absurdities, as our moral compass has begun to spin uncontrollably, as the middle-class has disintegrated, and as America has slowly devolved into a soft totalitarian, dystopian nightmare, passive resistance has become increasingly untenable and unacceptable to many on the right. 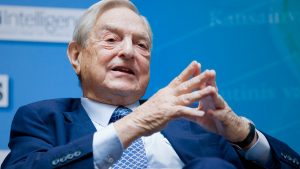 The reality is, a solid quarter of the country is intensely unhappy at all times! Furthermore, every four years, after one side loses the presidency to the other, another 30 percent or so of the nation isn’t just unhappy with the outcome, they’re crestfallen over it, and some find themselves in a genuinely revolutionary frame of mind. And only a fraction of those who aren’t utterly miserable about the outcome are truly happy about it! Most voters choose someone they can stomach nowadays, not anyone resembling a good candidate or a true leader.

What’s more, there is a fundamental difference between being unhappy with the current governmental situation and being downright apoplectic. The left doesn’t merely view Donald Trump’s victory as bad, it views it as completely intolerable, unacceptable, illegitimate. The same was largely true for the right when Obama was elected and then reelected, albeit to a lesser extent. What’s more, much of the left would be quite fine with a staged coup against President Trump, military or otherwise. That is a perfect recipe for political instability. This is precisely how democracies break down.

At any given time in contemporary America, a majority of Americans are in dormant revolt against their own government! We are without question a completely unmoored society, broken, ruined by our greatest strength, diversity.

It is an organism with a vertebrae.

Right now we are a nation with a right and a left leg running in opposite directions. We have no spinal column, we have no command center, we don’t know what kind of nation we want to be and the differences between the competing visions/goals of America’s constituent brain cells are too wide to keep us sane. We are the Norman Bates of nation-states.

We would all be better off if the US Government was dissolved post-haste and split up into its constituent regional or ideological personalities. Each personality would then be free to flourish in its own way, according to its own will, its own individual character free to truly actualize. We would be governed by those that share our interests and our worldviews, not by those we consider fools or by hostile out-ethnics who hate our history, who hate our ways, who consider us fools, who, to be frank, want us destroyed, eliminated.

Nobody should have to live in a society in which one’s culture and history are denigrated daily, in which one is considered everything standing in the way of social progress, which is precisely how diversity-worshipping modern America views the mere existence of white people. The American experiment has failed. It is high time we accepted that. We need to start discussing what the post-American world should look like and how we might bring it into being.