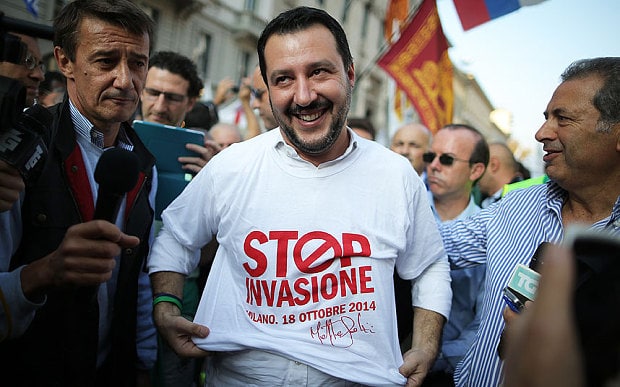 The separatist party has recast itself as a nationalist party.

Italy’s Lega Nord (Northern League) party has set out its vision for Italy, ahead of the country’s General Election later this year. Matteo Salvini, the federal Secretary of the party, who has always taken a tough line against migration, has promised to triple deportations and secure the border.

He also stated that, given the powers, he would allow authorities to castrate and expel migrants who had committed gang rapes. The party is also unapologetically against Islam, describing it as backwards and a threat to Europe’s stability.

Lega Nord used to be known for their desire to break Northern Italy away from the south and form their own independent country. However since the migrant smuggling route opened up between war-torn Libya and Sicily, their political focus has shifted dramatically. The Party was the first political organization in Italy to push back against the migrant crisis of 2015, and has since risen in popularity.

Although Matteo Salvini and his colleagues describe themselves as ‘populists’, there has always been a nationalist spine to the party. Lega Nord was well known for preferring Northern Italians to Southern Italians, believing the residents of the south were lazy and prone to criminality. However, these views have softened in recent years, with Salvini forming a chapter of Lega Nord in the south of Italy, which is called ‘Us with Salvini’.

As readers may be aware, the current Italian government are populating empty Italian villages with African migrants, which is essentially creating a new rural underclass in the country. It is not uncommon these days to see groups of African migrants wandering the countryside. This policy is why Lega Nord is gaining more and more popularity in the south, which would have been unthinkable a few years ago.

The most important comment the party has made over the years referred to the migrant crisis. They have openly stated that the current waves of immigration to Europe are being orchestrated by the elites, in order to replace the native population. They even went further and accused those same elites of secretly funding Islamic terrorism and people smuggling networks.

The likelihood of the Lega Nord winning the general election on its own is near-impossible. Yet their rising popularity in the polls means they have a good chance of forming a coalition with whoever comes first.

Italian politics is notoriously chaotic, there have been over 60 governments since World War 2, and embarrassing corruption scandals often prevent legislation from passing. However, as things currently stand, there does seem to be changes happening on the ground, which provide a glimmer of hope for Italy’s beleaguered people.