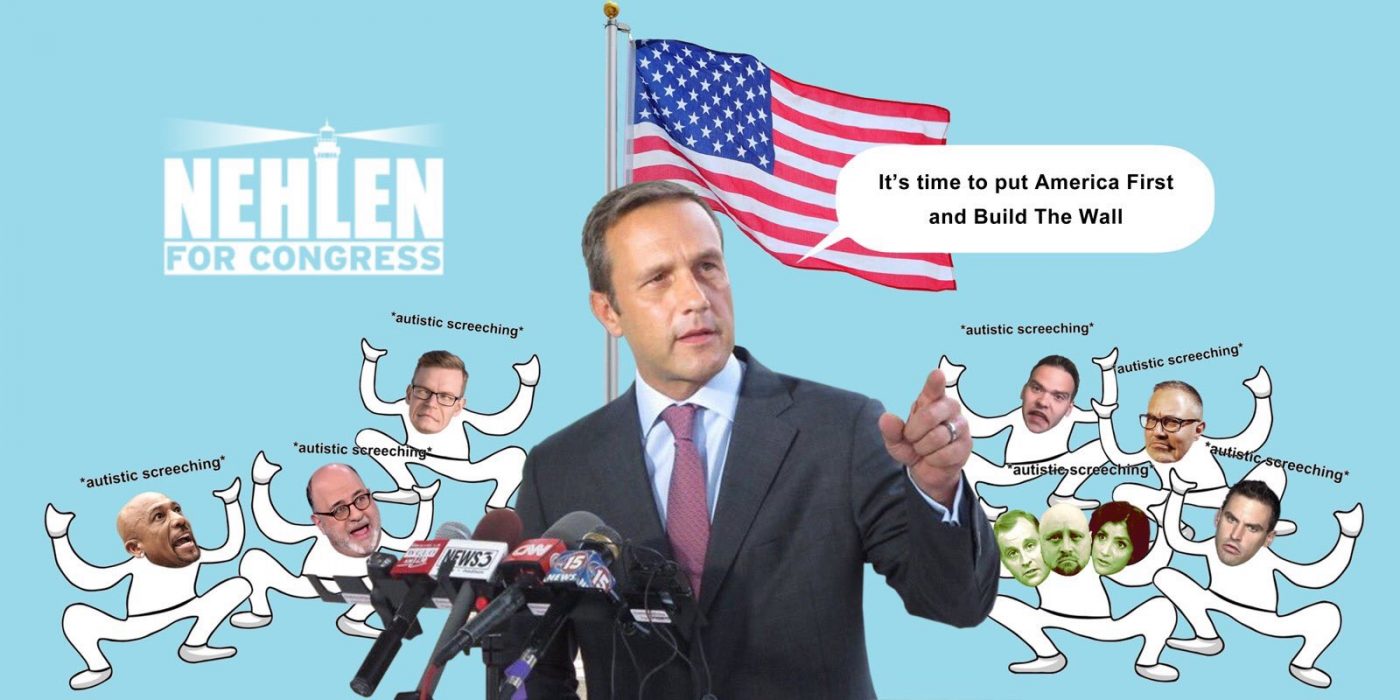 There are two types of Alt-Right political candidates. We must choose.

Steve Bannon has reportedly cut ties with Paul Nehlen, the businessman who, in the spring of 2016, challenged House Speaker Paul Ryan in the Republican primary in Wisconsin’s First District. Nehlen had been on Bannon’s “ant-Establishment” docket for 2018—the men and women who would take back the GOP in the name of Trump. Now, according to Arthur Schwartz, an adviser to Bannon, “Nehlen is dead to us.”

His crime was a series of “based tweets.”

Bannon’s summary execution is revealing. He stood by Alabama’s Roy Moore until the bitter end, long after it was clear that the accusations of sexual misconduct—and very long after Moore’s abject silliness, with his six-shooter and ten-commandment monuments—threatened to jeopardize a Senate seat in the reddest state in the country. Essentially, Bannon will accept almost anything when it comes to hokey religiosity. But tweet out “It’s Okay To Be White,” and you’re done.

Nehlen should have been more disciplined. But the episode reveals that Bannon’s brand of “economic nationalism” and “Trumpism” is just another variation on the “color blind,” identity-less American Right. Bannon is not “our guy” nor has he ever been. Indeed, Bannon never understood European nationalism, which he supported throughout his tenure at Breitbart, but only as another version of the “Tea Party.” Speaking before the Vatican in 2014, he foresaw a day when the racialist elements within European nationalist parties would be “washed out,” in favor, I guess, of multi-colored, Judeo-Christian, middle-class populists.

So is Bannon of any use to us?

Potentially, still quite a bit.

Bannon commands many more resources and much more influence than the Alt-Right. Without question, a far better sequence of events would have been for Nehlen to stay on message and maintain Bannon’s support. Bannon would have thus channelled energy towards a candidate with an identitarian heart, as Nehlen clearly has, and not towards yet another Tea Party goofball. Bannon’s 2018 Congressional project represents “dumb money,” and it is far easier to redirect dumb money than build up funding sources from scratch.

And for that to happen—in this transitionary stage in which open White identity politics is not yet politically possible—great discretion is needed. Much greater than Paul showed this past week.

Getting “red pilled” is one of the most inspiring—and traumatic—things ever to happen to us. It changes us, and not just how we look at politics, history, and society; it changes our personalities, ways of life, and relationships with friends and family.

It also brings a great deal of danger. Saying something as seemingly innocuous as “It’s Okay to be White” puts one’s job, status, and family in jeopardy. And the difficulty in swallowing the Red Pill is only matched by the difficulty of staying quiet once you have become aware of these shocking and hidden truths. (Nehlen clearly couldn’t keep a lid on it.)

Politicians rarely venture into the Forbidden Zone, regardless of the political climate and regardless of their own personal state of red-pilling. That is because politicians get elected by promising security and safety, with some bacon and patriotism on the side. Visionary leaders and activists, on the other hand, promise danger, excitement, and the moral satisfaction of being a principled heretic. Visionary leaders and thinkers can change the world, but they rarely get elected to Wisconsin’s First Congressional District.

Any candidate who holds Alt-Right or identitarian personal views has a hard choice to make: Shall I be an Visionary Candidate or a Winning Candidate? Each one of these choices is equally valid, but each one demands different abilities on the part of the candidate and fundamentally different presentations to the public.

In his presidential runs in 2008 and 2012, Ron Paul was the quintessential Visionary Candidate. He never had a chance, and he said things that were hopelessly impractical: “Bring the Troops Home Now!” “Institute the Gold Standard!” “Read Rothbard!” etc. To Ron’s credit, he educated millions on libertarian theory and economics; he won over idealistic young people, if not their parents and grandparents; and his campaign ultimately funneled tens of millions of dollars into the libertarian think-tank and activism industry (which is ironically located in Washington, DC).

Rand Paul, on the other hand, is a Winning Candidate. He can draw from the energy of the libertarian movement, but he plays politics and picks his battles. Rand doesn’t call the American military an occupational force; he doesn’t claim that parking tickets are a violation of the Non-Aggression Principle; he doesn’t demand the legalization of heroine and prostitution—despite the fact that many of his libertarian supporters (including his own father) genuinely believe in all of these ideas. Instead, Rand chooses issues that resonate with his electoral base and touch on libertarian principles.

Again, both choice are equally valid, morally and even strategically. While a Visionary Candidate can be quixotic and LARPy, he can also be inspiring and courageous. While the Winning Candidate is inherently pragmatic, he is often too pragmatic. Indeed, I fear that our movement might get overly excited about a seeming “Winning” candidate, who can’t actually win or who would likely cuck when in office. Such “winners” actually represent a huge opportunity cost for the movement.

The essential thing is that a choice must be made from the beginning.

There are, of course, some interesting exceptions, and the fascists were almost always exceptional: Gabriele D’Annunzio, Benito Mussolini, Adolf Hitler, and Oswald Mosley were eccentrics and artists in their own ways. But we must remember that exceptions prove the rule. Remaining fixated on the fascists of continental Europe is not a “winning” strategy. Most who fall back on these movements as ideological guideposts do so from a position of desperation.

David Duke was also someone who blurred the line between the Visionary and Winning candidate. His former membership in the Ku Klux Klan certainly proved his bona fides; but his campaign rhetoric was not really that of White Nationalism. In his electoral runs, for Senate (’90) and Governor (’91) and President (’92), he spoke the language of “America First” (much like Trump) but also of Reaganism and eduation and welfare reform. Indeed, in his debate with Edwin Edwards in ’91, Duke presented himself much more like a “New South” reformer, whereas Edwards seemed like the good ol’ boy from Dixie. Many Republicans pretend to be nationalists in order to enact tax-cuts. David Duke was the rare breed who pretended to care about tax cuts in order to pursue nationalism.

I actually think that a Visionary Alt-Right candidate might offer our movement the most at this moment, and that so-called “pragmatism” is overrated. But let’s put that aside and focus on what it would take for a candidate to win.

A Winning Alt-Right Candidate should talk about implicitly racial ideas, which resonate with the White working and middle class. These include:

A Winning Politician should never tweet out Alt-Right memes, which are inexplicable and offputting to the uninitiated. Nor should he ever speak openly about the following:

There are, of course, ways of threading the needle. One could, for instance, say something like,

I respect Israel’s desire to maintain its ethnic and religious identity. As a conservative, I just want America to stay American.

Such a statement implicitly acknowledges the racial identity of America, raises the issue of Jewish influence in a roundabout manner, and puts a splinter in the minds of die-hard Israeli patriots: “If Israel can maintain its cultural and racial identity, why can’t we!?” In other words, it uses pre-existing logical pathways in the average conservative voter’s mind.

Nehlen’s fundamental problem is that he never made a choice. Perhaps this resulted from the fact that his red-pilling is an ongoing process. Nehlen is “Normie friendly” to say the least, and as an engineer, he is most authentic when he talks about economic populist issues. But through his week of tweeting, he swiftly transformed himself into a Visionary Candidate. Nehlen thus forfeited Bannon’s dumb money and made it much more difficult for him to win. Worse still, Nehlen is simply not comfortable in the role of Visionary Leader, nor is he an idea man for this position.

I admire Nehlen’s courage and forthrightness; indeed, I’ll back him and help him to the degree that I can. But we must be brutally honest: Nehlen made the wrong choice, and this probably can’t be undone.

After the Wikileaks revelations, Hillary Clinton was roundly attacked for espousing a “public and private positions” on political matters. This was, her critics said, the philosophy of a hypocrite or con artist—if not a sociopath or “Sith Lord.”

In fact, there was great wisdom in her statement, for in the never-ending “Current Year,” we are operating under persecution and cannot be fully honest to voters and the media. Dog-whistling, while maintaining plausible deniability, should be the standard MO of any Alt-Right candidate. This is not “cucking” so much as it is understanding the political climate and the average conservative voter’s mindset.

As bad as the situation is, most conservative voters are deeply disturbed by the idea of raising the topics of race, identity, demographic displacement, and—heaven forbid— Jewish influence.

The Normie wants a candidate that will take care of him, and bring back the good ol’ days (Make America Great Again). But he doesn’t want to make any real personal sacrifices, any change to his lifestyle or mentality, which are necessary for this to come about. The Normie wants to remain “color-blind,” but he also wants his neighborhood to stay White. He wants to “be tolerant,” but doesn’t want his kids around gay preachers and teachers. He wants to “respect all cultures,” but he doesn’t want to see people in hijabs milling around the downtown mall.

The Normie Conservative is, in this way, afraid of himself and his own desires. He feels guilty for being who his he is. Both the Visionary and Winning candidate must understand this difficult and deeply ironic state of affairs—that the Normie will resist precisely what he desires most.

Whatever happens with Paul Nehlen, his very candidacy is proof of how widespread and powerful our message is becoming. Today, the Paul Nehlen controversy seems like an inevitability. Yet only a year ago, no one would have thought such a thing possible.

We should admire Nehlen, but also learn from his tragic missteps. For our goal is not simply to understand the world, but to change it.