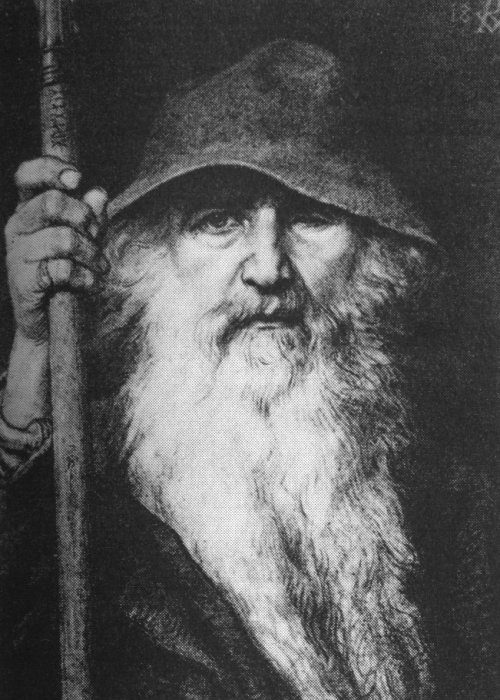 Ghosts of Christmas Past

There is a Paganism and Eternal Recurrence at the heart of the Christmas season.

There is a pair of clichés about the Christmas season that carries more significance than we might think: “Christmas is for children” and “Christmas makes me feel like a kid again.”

The first refers to a certain innocence we envy in the children around us, who seem to really believe in Santa, magic, and the world of fairies, and who instinctively love Christmas. For us, Christmas has become both expensive and cheap: the over-planned parties and schedules . . . the chore of buying gifts that will be quickly forgotten, disposed of, or re-gifted . . . the trudging through horrible, muzak-filled malls. . . “Becoming a kid again,” at least for a time, is our redemption.

And it’s a very real feeling. Entering the world of adults is, among other things, entering a world that is incessantly moving forward. Our lives are defined by projects, goals, accomplishments, deadlines, etc. Christmas, on the other hand, is an Eternal Return, a natural cycle that gives us a respite from linear thinking and planning.

We experience this Return not only through the season itself (when the nights become long and cold) but also through ritual. Ritual is something modern people, even devout Christians, are too quick to dismiss. Ritual is, we think, a dispensable, even embarrassing, remnant of something irrational from long ago. But ritual is, among other things, a way we can physically experience being-in-the-world and our own past. We remember through our bodies and senses just as much as through our minds, such as when we visit our old high school and whiff a certain smell to the grass that recalls the entire experience. Every Christmas, we do the same things over and over: drink the same drinks, hang the same decorations, hear the same music. In reenactment, we are transported back to a series of moments earlier in our lives. We become “a kid again.”

These memory-experiences are mostly postcard flashes. Every Christmas Eve, for instance, as I glance at lights on the tree and the too-dark sky, I re-live waiting, greedily, for Santa. Another flash, which is still quite vivid, comes from age seven or eight, as I lay in bed feeling real guilt and inner turmoil over wanting to believe in Santa Claus but no longer being able. Smelling hot-spiced wine, “Glühwein,” I’m reminded of wandering the streets of Vienna in December as a young man in my early 20s, hearing the sounds of the Christmas market in the distance . . . observing it, while not really being a part of it . . . and not having a clue what to do with my life.

“Bob’s eggnog recipe” or your favorite “Christmas sweater” might seem like recurring jokes. But in their ways, they fulfill the function of grand ritual. And this aspect of Christmas holds not only for our personal lives but for our people and civilization as well. We have become so accustomed to Christmas rituals—and so accustomed to them in the form of kitsch—that we forget how deep they take us into our race’s history . . . far deeper than what the holiday is said to celebrate. For the rituals through which we understand ourselves are fundamentally Pagan in both essence and form.

In his famous book The Germanization of Early Medieval Christianity, James Russell wrote of a “double conversion” that occurred when the early Church began spreading beyond the Mediterranean and Near East and sought to bring “the Germans” (i.e., the northern European tribes) into the Christian fold. At the time, these Europeans practiced what is now referred to as Germanic Paganism, a constellation of myths, gods, and symbols that was, at once, centered on the tribe and family and also shared by White men across the continent. Europeans did, eventually, profess Christianity, but the real “conversion” was that of Christianity itself, which both accommodated Europeans folkways and began to be articulated by them.

This process occurred on various cultural levels, from the Europeanized image and conception of Christ to notions of Right and sovereignty. The mix of Germanic, Scandinavian, and Roman customs that define “Christmas” is a metaphor of this history. For Christmas remains the most radically Pagan of all holidays, if we have the eyes to see it.

This begins with the day itself. Nowhere in the Bible does December 25 appear as the birth date of Jesus Christ. (If the shepherds were attending their flocks by night (Luke 2:8), then Jesus would have been born in Spring.) December 25 was, however, well known as the birthday of Sol Invictus, the sun god who was patronized by later Roman emperors, including Constantine. The 25th was Dies Natalis Solis Invicti—”Birthday of the Unconquered Sun,” when, after the Winter Solstice, the arc of the Sun across the sky begins to rise again. The famous literary pun of “Son” and “Sun,” which works across Germanic languages, was a real experience of our ancestors. “Now is the winter of our discontent / Made glorious summer by this sun of York” (I, i, 1-2). Hamlet, by contrast, sardonically claims that he is “too much i’ the sun” (I, ii, 67). His rightful inheritance has been snatched away from him through treachery, and he wonders whether he up to the task of taking it back . . . a feeling shared by many of us.[1]

Thinking in the way, the meanings of things we take for granted unlock themselves before our eyes: the evergreen (the endless life cycle) . . . the Yule log (festival of fire) . . . kissing under the Mistletoe (the sacred plant of Frigg, goddess of love, fertility, and the household) . . . and, of course, Santa. “St. Nick” is only remotely related to Saint Nicholas, a Church father at the Council of Nicaea whose feast day falls on December sixth. The character of Santa is much more a conflation of various Germanic gods and personages. One of these, as evidenced by Santa’s descent into the fiery chimney, is the smithy god Hephaistos or Vulcan. (In other words, “The Church Lady,” and many puritans before her, was right to fear that Santa has an etymological connection to S-a-t-a-n.) Most important of all is the chief god, Odin or Wotan, who stares out at us from behind Santa’s many historical masks—from Father Frost (Ded Moroz), the Slavic god accepted by Russian Communists, to the jolly fat man promoted by Coca Cola. Odin is the Wanderer from the North, a god of war, but one who delivers gifts to children during Yuletide. Odin commands Sleipnir, the horse with eight legs, who, in his translation to contemporary myth, became the eight reindeer: Dasher! now, Dancer! now, Prancer and Vixen! On, Comet! on Cupid! on, Donder and Blitzen!

The War on What?

A few years back, Megyn Kelly, then a Fox News host, was roundly ridiculed and condemned after she declared on national television that “Santa just is White” (along with Jesus). She affirmed this in response to an African-American blogger who argued for more multiracial depictions of Santa, or for him to be racially neutralized as a friendly Penguin. Santa, as we can know, is White, but in ways that Megyn is unable to understand.

The amusing “White Santa” controversy was only one variation on a theme. Between Thanksgiving and New Year’s, Fox’s programming is packed with denunciations of the “War on Christmas”; these are made, almost without exception, by conservative Republicans and nationalists, who seem to define their identity against an ever-growing list of PC atrocities.

Like so many other “conservative” causes, opposing the War on Christmas masks much more than it reveals. To begin with, focusing on “secularization,” exemplified by the dreaded “Happy Holidays” greetings, is convenient for Americans who want to ignore the ways Christmas rituals are being vulgarized by consumerism. Apparently, maxing out our credit cards on useless junk is fine, so long as the checkout girl says “Merry Christmas” and the indoor mall features a nativity scene.

Those who lament the “war on Christmas” rarely pinpoint what exactly is being warred upon. Undoubtedly, there is an elite in the United States and Europe that has contempt for Christian belief. But this effort has not led to any decline in public festivals and holiday merrymaking. The Bolshevik or Puritanical dream of “banning Christmas” in favor of grey-on-grey efficiency or de-Paganized Christianity has very few advocates and little chance of materializing. In my lifetime, the Christmas season has grown noticeably longer and public and private festivals, more elaborate and intense. To be sure, much of this has to do with the fact that America’s post-industrial, consumer-driven economy depends on end-of-the-year gorging. But I also sense that something bigger is taking place—that in a multicultural, multiracial society, Christmas, alongside football and super-hero movies, is one of the preious few collective rituals shared by all of us.

Christmas is being de-Christianized, the result not only of snooty liberals but of the gradual waning of faith across the population as a whole. What remain, though, are the Germanic, Latin, and Slavic customs and rituals of Yuletide. These might seem vulgar, hallow shells of themselves—Christmas kitsch—but they are distinctly European and distinctly ours. And they are a starting point for becoming, again, who we are.

In the small ski town in which I spend celebrate the holiday, every Christmas Eve, everyone goes to the base of the mountain and watches skiers descend the slopes holding flaming torches, which creates a magnificent display of lights. At the end of the parade comes Santa, illuminated like a god.

As I mentioned, one of my stranger Christmas memories is of struggling with my failing faith in Santa, as if in disbelieving in him, I would betray my parents and family and the whole joyous season. But what is belief, really? When we honor Santa by speaking of his coming, when we leave him offerings of cookies and milk, we effectively believe again in the gods. When we celebrate Christmas, we become Pagans again.

For the time being, though, we know not what we do.

An earlier version of this essay was published at RadixJoural.com on December 25, 2013.

[1]: This opening line from Richard III references the turning of the seasons, of course, but also Edward IV’s identity as the son of the Duke of York and his victory at the battle of Mortimer’s Cross on February 2, 1461, in which, it is said, three suns appeared in the winter sky. Essentially, Edward is a man called on by the world itself to rule. Hamlet is speaking to his uncle, Claudius, who’s just become both King and his father through marriage to his widowed mother.↩

TopicschristianityChristmasPaganism
Share on FacebookShare on TwitterShare on RedditShare on VKontakte