December 18, 2017, was set to be a Day That Would Live in Infamy—the day the Alt-Right was banned en masse from Twitter upon the release of its new rules.

The results were more ambiguous.

Jared Taylor and American Renaissance were the most notable victims of the purge, notable because no one can remember Jared ever engaging in “abusive” behavior; if anything he should be criticized for his politeness. One purge seemed directly political, though: Twitter banned Britain First and Jayda Fransen, whom Donald Trump had retweeted last month, to the gasps and pearl-clutching of Theresea May and most of the mass media. (Britain First expresses your basic, Rebel Media-tier, neocon populism: “We hate Islam, but love, love, love Jews and Zionism. Not racist!). Other notables included Michael Hill, The Traditionalist Workers Party, The League of the South, Hunter Wallace, Vanguard America, and many others.

The purge is real, but I suspected it was overrated.

I then called on Alt-Right Twitter to post AmRen material—to use the site as a free-speech platform, which is its essence and destiny.

I thought I had escaped the Purge, but when I woke up this morning, I learned that I had been put into “time out.” 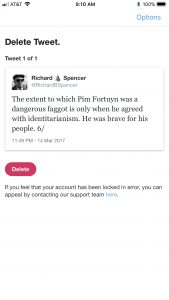 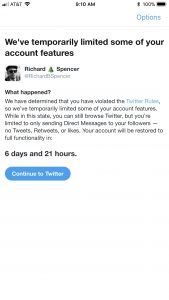 The offending tweet comes from a thread in which I compared Pim Fortuyn to Milo, two members of the “Degenerate Right” who based their careers on populism and immigration heresy. Fortuyn expressed some authentic nationalist feelings, whereas Milo put forth only liberalism. Perhaps Twitter’s Committee On Public Safety were simply searching for bad words. “Faggot” set off a bell.

Not so long ago Pim Fortuyn was murdered by antifa for warning of the barbarian invasion. 15 years later we count the votes in Holland. 1/

“I don’t hate Arab men — I even sleep with them.” – Pim Fortuyn. Where have I seen that argument before? 5/ pic.twitter.com/x8vU3e9Fgf

Okay. No tweeting for the week.

Let’s see if this remains just a slap on the wrist. Perhaps Twitter is biding time to come up with a definitive strategy? Perhaps they are afraid of the news stories and “Is this censorship?” handwringing that would result if they gave me a compete ban?

Shut me down and I’ll come right back. Follow me on gab.ai at https://t.co/7CmM6kJDPr

We’re not giving up this platform. It is ours.