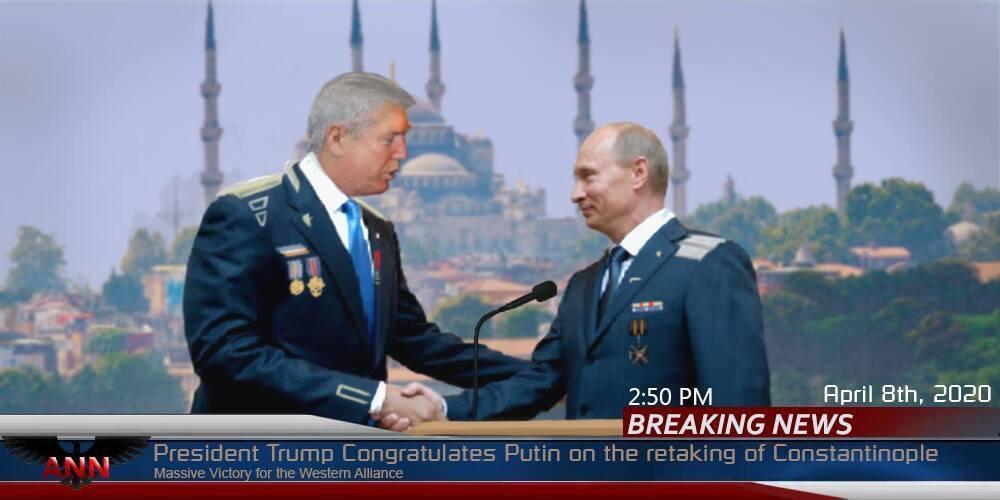 Wait, what? I thought this place was safe!

I’ve written a lot about St. Petersburg – this beautiful but hapless city of wannabe intellectuals (now you know why I’m here heh) and cargo cultists.

Apparently, we have an Islamic terror problem here.

The Russian President Vladimir Putin has thanked his US counterpart Donald Trump for help in preventing a terrorist attack in St. Petersburg. Data provided by the CIA enabled Russian security services to find and detain terrorists

The Russian leader expressed his gratitude in a telephone call, adding that the Russian security services would also always share information with their US colleagues, were they to obtain data on any planned attacks on US soil.

Putin also asked Trump to convey his compliments to the CIA director, Mike Pompeo, as well as to the operatives that gathered the information about the terrorists. He said that the data provided by the US was enough to track down and detain the members of the extremist cell.

The White House later said in a statement: “President Trump appreciated the call and told President Putin that he and the entire United States intelligence community were pleased to have helped save so many lives.” The White House also confirmed that US intelligence agencies provided Russia with information “concerning a major terror plot in St. Petersburg.”

Earlier, the Russian Federal Security Service (FSB) arrested the members of a terrorist cell linked to Islamic State (IS, formerly ISIS) in the Russian city of St. Petersburg. The extremists were planning a series of attacks on public places, including a suicide bombing and an explosion in Kazan’s Cathedral in the center of the city.

Of course, the Russian government is doing everything it can to combat “extremism”.

That’s comforting I’m sure, but should they ever defeat the problem of extremism, they might just be left with the problem of Islam and I don’t know if they’ve got the stomach to go about tackling that.

The city periodically gets inundated with kebab merchants from the Caucasus and temp labor from the Stans. They commit some crimes, annoy some cops and eventually get purged. Then the timer resets, and we wait for the coming of the next wave. You know it’s high tide when they force one of their scowling, inbred, poo-eyed congregation members to start handing out “Al-Salam” newspapers by the metro.

Don’t get me wrong, we’re not talking Sweden-tier flood levels here, but it’s annoying nonetheless. And perfectly natural, I’m sure. Just part and parcel of living in a Russian city.

More and more I find myself sympathetic to the retarded arguments of the Russian Nationalists who call for the complete disintegration of Russia along ethnic lines. Putting aside that this is exactly what the Liberals in Russia (and by extension, the fellas over in Langley) want, this might spare me the injustice of having to see these “people” hawking their wares around their makeshift bazaar near the metro every day. So, just for that, maybe I’d be down for voting Liberal-Nationalist.

Yeah, I’d totally vote for Navalny, except that he’s not running anymore. Putin is though, and he’ll win. As usual, I defer to Anatoly’s take on the topic.

Only, Russia has experienced what a coalition of liberals and nationalists working together can do to the country already in the 90s under Boris Yeltsin. (un)Surprisingly, they got rid of Soviet internal migration controls and the cities got flooded by brown people who were kept locked up in their vassal states before that by the Commies.

Oh and don’t tell my casual acquaintance group of Sobchak-supporting liberal chicks or my other group of edgy an-cap pro-Navalny nu-Russians this…but the old Commies are by far the group that closest appeals to our Alt-Right sensibilities.

Judeo-skepticism, anti-Washington Consensus, anti-immigrant (but not race-realist unfortunately) and Soviet (read. traditional) values. Yep, that’s not bad. Don’t mention that you think Hitler is fuckin’ Based and you’ll find you have a lot of common ground with these people. And best of all, they aren’t keen on emmigrating, which the patriotic liberals and “nationalists” seem to all want to do.

Woah. There I go again, ranting about how retarded the political/cultural scene is here. I think the article in question had something to say about Russo-American cooperation in the sphere of anti-terror.

Hey, this is fantastic news!

Russia has always pursued the strategy of supporting America’s “War on Terror” and even adopted the same language during the Bush era. The logic behind this decision was simple, the Russian elites – still convinced of the possibility of Convergence with the western elite – wanted to win brownie points with the Bush administration and also to win support for their Chechen pacification campaign. They wanted to get the western liberal media off their back, so they throw in their lot with Bush’s “conservative” crusader campaign.

Remember when they tried to warn Obama about the Boston kebab-bombers?

Now it seems that Trump is finding common ground on the same topic that Putin was able to find ground on with Bush.

I think the biggest takeaway is this: Trump may bend to the neo-cohen agenda when it comes to periphery zones of interest like when he bombed that airstrip in Syria, started grandstanding against the Norks, poked and prodded Iran and moved the capital to Jerusalem, but he won’t indulge them in their end goal of destroying Russia.

Whether this is because Kushner and co are lower-caste Chabad Jews who sometimes act as a counter-weight to their more virulent neo-liberal cousins in power and Trump has thrown his lot in with them or because he’s simply not retarded enough to start a war with Russia – it’s definitely the better of two bad options.

And on the other side, Russia needs some breathing room to squeak through these elections without any color revolutions, finish modernizing its army and keep hardening its economy against Western sanctions. Hopefully, Trump and his crew can stave off the neo-cohens and give them the 2-3 more years that they need.

And hopefully, there will be enough of Russia left that by the time America collapses in on herself, that she too will be able to focus her attention inwards to start cleaning house. Because, yeah, let’s be real, the situation isn’t ideal.

And no, I’m not talking about corruption and pot-holes in the streets. That’s never going away.

But the Muslim cartels operating in the cities could easily go. I think most Russians will be able to stomach the inevitable drop-off in quality hachipuri that will result.

With the American vice tightening around Russia’s neck though, its hard to address these problems. Just look at what’s happening in Ukraine. “Nationalists” win and pull Ukraine into the Western orbit of influence. Gay parades and migrant quotas follow soon after. Thanks, Based Nazis!

And look, I’m going to level with you.

If there’s going to be a balkanization or the blessed day of total RAHOWA here, it HAS to happen AFTER the American project collapses. Otherwise, it will be a Yugoslavia 2.0 scenario all over again. And the same goes for Europe.

Nationalists need to understand geopolitics to avoid being useful idiots of Washington.

We all live under the watchful gaze of the bugmen working in Langley and Farragut. Till they blink, we have to be very cautious indeed.