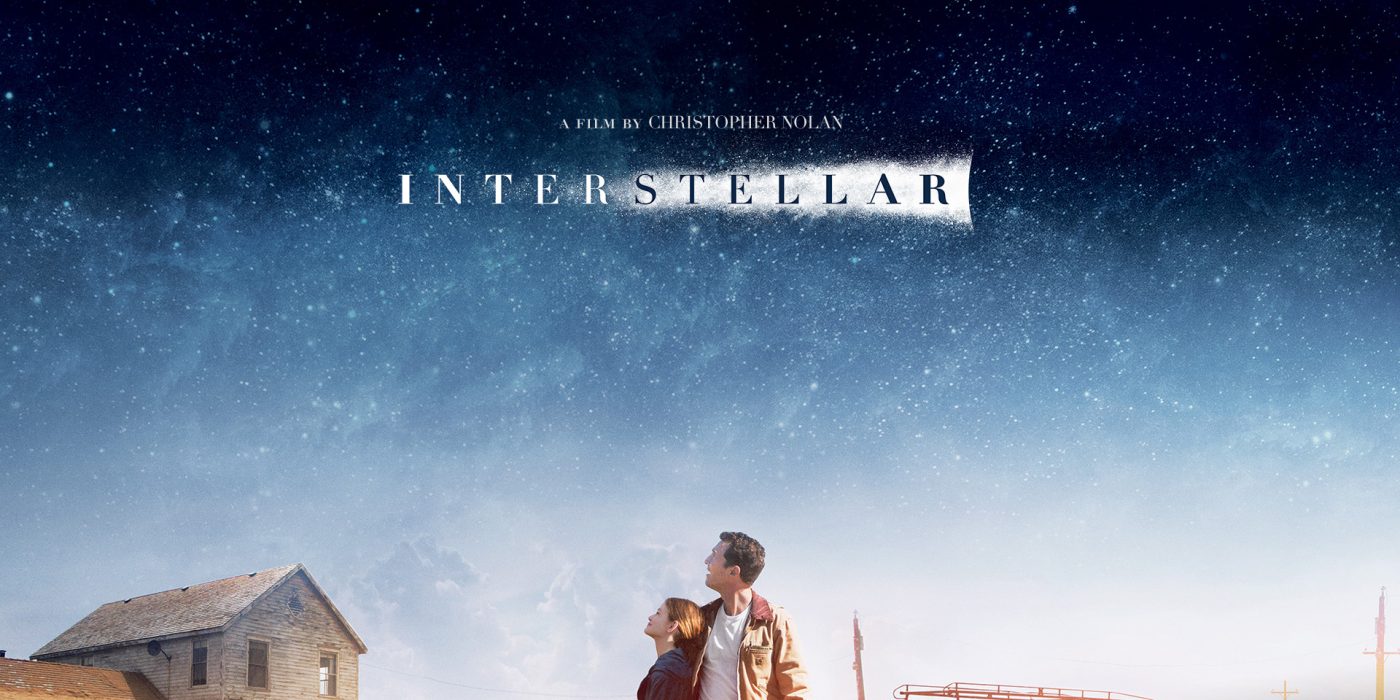 Is Interstellar A Movie About The Faustian Soul Of The White Race?

Christopher Nolan’s brilliant space epic “Interstellar” is an homage to 2001: A Space Odyssey, but flips the script. Whereas Kubrick’s film tells an austerely visual story purposefully devoid of human emotion, Nolan’s film focuses entirely on the emotions and elements that define humanity. In short, the film is an exploration of human nature as the species strives to save itself from extinction. A fitting allegory for our own race.

The story begins with Matthew McConaughey’s character, Cooper, commiserating with his stepfather, John Lithgow, at the current state of mankind (the white race) facing extinction from environmental blight (demographic replacement) that is destroying the planet (Western civilization). Cooper is frustrated that humanity’s ambitious spirit has been reduced to farming to stay alive.

He opines: “We used to look up at the sky and wonder at our place in the stars. Now we just look down, and worry about our place in the dirt.” This isn’t science-fiction, but a sobering reality. The European race ascended to the moon, now it is descending to the mud. Interstellar foreshadows the calamitous doom that awaits humanity if we do nothing.

While Nolan may not have been writing explicitly about the white race, the analogy is apropos, especially when it comes to exploration and technological conquest, the quintessential Faustian spirit of Western man. The upward ambition to conquer the stars is a primary element of our conscious, to head forth into the great beyond. There’s a reason every great explorer belongs to the European race. While the advanced expeditionary ships of China turned back for home, Europeans set sail for even greater horizons. Cooper’s lament at the degraded state of humanity can only be interpreted as meaning the white race.

Another human quality Nolan emphasizes is lying. The film is an interplay of lies. Dr. Mann (Matt Damon) lies that his planet is habitable to save himself; Cooper lies to Amelia Brand (Anne Hathaway) that he’s headed with her to Edmund’s planet before ejecting into the black hole; TARS, the artificial intelligence robot, is programmed to lie because humans can’t handle the whole truth; and the biggest lie of all is from Dr. Brand (Michael Caine). His great equation to save the earth was a farce from the start. Plan A for the Endurance to return home was a lie to uphold the pretense that everything is going to be okay. Dr. Brand assumed that nobody would work to achieve Plan B (the real plan) to establish a new colony if it meant consigning everyone on earth to death.

Similarly, we live in an age of the Big Lie, where a fraud like D’souza fabricates an entire big lie about the Big Lie. What is our Big Lie? It’s the lie that race doesn’t exist, that race doesn’t matter, that race isn’t the foundation of identity. Put simply, it’s the lie of human equality. Instead of telling the truth, our leaders, like Dr. Brand tell us a lie because telling the truth would jeopardize their utopian vision for the future of mankind. If people knew the truth that a multi-racial society will never achieve “equality” only our own destruction, the masses would revolt in the streets in the same way nobody would go along with Dr. Brand’s vision to let everyone on earth perish.

Only when Cooper realizes the mission is a lie does the stark reality galvanize him to take a daring plunge into the black hole, which eventually leads to earth’s salvation. For us, dispensing with the lie of Multiculturalism and Diversity will mean our race will have to come to terms with our dwindling numbers, but our salvation will be far easier than Cooper’s leap of faith. Waking up our brothers and sisters is 99% of the work, the answers are innumerable.

Ultimately, the essential human element that Nolan settles on is Love. Not sentimental liberal love (that seeks to validate everyone’s equal worth–a denial of love), nor romantic love, but the deep love of one’s own–the love of family. It is the type of love a parent has for their child and the child for their parent that Nolan coveys as the most important human quality.

This is the love that drives Cooper to reunite with his daughter against all odds. As Dr. Mann (Matt Damon) morbidly explains to Cooper as he tries killing him, a man’s survival extinct is dramatically increased by fatherhood because the love he has for his child compels him to keep fighting for life where others give up. He is proven right.  Cooper’s love for his daughter pushes him to hold onto life and save himself and in the process all of humanity.

In the film’s climatic scene, Nolan calls upon Love as the key to everything. Watch:

Instead of becoming Star Child, Cooper emerges from the black hole trapped in an alternate dimension outside of his daughter’s room. He is ‘Murph’s ghost.” TARS has also traveled through the black hole and discovered the data needed to solve the quantum paradox of gravity that will save humanity.

In that moment, Cooper realizes he was brought to this space beyond time to transmit the information to Murph, he is the “bridge” to mankind’s survival. His only means to communicate across the dimensions, however, is through gravity.

“How?” TARS asks will the message be received.

“Love, Tars, Love,” Cooper responds back rapturously. “My connection with Murph is the key.”

With only one way to save humanity and only one way to ensure the message is received, Cooper seizes upon his watch. Murph will find the data if he codes it into the watch.

TARS, as a machine, is in disbelief that the watch is the right method, this is mankind’s last hope, and it his has to work.

“What if she never came back for it,” TARS says.

“She will, she will,” Cooper insists.

To which Cooper solemnly responds, “Because I gave it to her.”

That’s it, despite all the years of separation and sense of betrayal Murph felt towards her Father for leaving her, Cooper knows she will one day come back for the watch. Why? –Why do families pass down heirlooms, and fathers their special watch? Because it is within these physical pieces that the memories of our loved ones live on. The objects are “bridges” that transcend time, that carry on after them, that transmit the memories back to us. In the film, this calling to keep alive the memories of her father compels Murph to come back for her father’s watch. Before she leaves the house for good, to never return, she turns one last time and grabs the watch. At long last, the answer to everything is found before her as she gazes upon the timepiece.

How do I know we on the Alt-Right will win? Love­– that is the love for one’s own.

The love for our racial family will drive us to survive like it did with Cooper and will stir within even our most blinded brethren the calling to come home, like it did Murph, who comes back to her Father’s home and the room she swore she would never enter and reaches for the watch.

Murph represents our liberal kin and Cooper us racially aware whites. Murph, like liberals, spends all of her time trying to make a hopeless project work (Dr. Brand’s equation), which like Diversity, is an utter lie doomed to fail. Meanwhile, we on the Alt-Right, are doing everything we can to save the white race from its own annihilation. Like Cooper, we are seemingly trapped in an alternate dimension unable to communicate to our racial brethren. White liberals despise us for betraying their utopian vision and ostensibly ruining everything. They look back upon their ancestors and the Western civilization that was given to them with regret, guilt, and anger in the same way Murph resented Cooper for abandoning her.

In the end, though, our lost brethren will come home, and they will take hold of the watch, wherein they will learn the truth about themselves, the world, and their ancestors. Why? because love, the love of one’s own will continue to grow as our numbers dwindle and the light of our race dims. As the anti-white hatred escalates and our people face ever harsher persecution like our brothers in South Africa, the pull of family, of tribe, of race will penetrate even the coldest of hearts. They will turn home for an answer, just as Murph does in the film.

“What are we here to do” TARS asks Cooper.

“Find out how to tell her.”

That is our mission. Our race will not go gently into that good night, we will rage, rage against the dying of the light. The Alt-Right is merely the first glimmer of a fire that is only now beginning to flame.

We are the heirs to the greatest civilization to ever exist. When hope begins to fade, our kin will look home for what was given to them, and we will be there as the watch, with the message to save us from destruction.

Because our ancestors gave it to us.