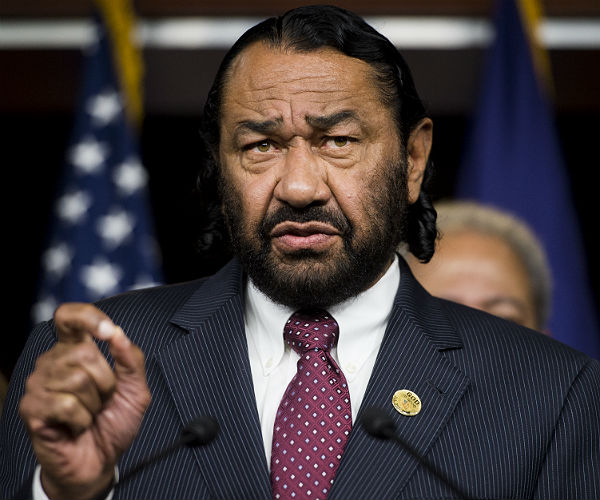 Malcolm Jaggers5 years ago17 comments
Rep. Al Green has an unsavory look about him.

They’re not used to being told “no”.

Black Americans, who are among the most coddled groups in history, cannot quite grasp the concept that they are not in control of who represents the country.  They cannot quite grasp that Whites are allowed to choose our own representatives.  And as the lowest IQ subpopulation, they are the most credulous of the “Russian collusion” narrative.  Put these factors together, and it results in Blacks and other low IQ minorities being largely in favor of impeaching our President.

Al Green, a Black Democrat congressman from Texas, with the stumbling inarticulateness we would expect, is leading the push to impeach President Trump.  He forced a vote in Congress for which 58 Democrats were in favor.  His justifications for impeachment, which he notes do not have to involve criminal violations, are apparently for Trump’s racism.

Which is totally justifiable, by the way.

He filed his articles of impeachment against Trump “for associating the presidency with white nationalism, neo-Nazism and hate” and “inciting hatred and hostility.”  This hyperbole references Trump’s rather evenhanded reaction to Charlottesville, his retweeting of Britain First videos of Muslims brutalizing Whites and other Islamic perfidy, and for the so-called Muslim ban.

Also included in Green’s articles of impeachment are Trump’s criticism of the ridiculous kneeling Black football players, and his criticism of the grotesque Black congresswoman Frederica Wilson (she of funny hats, and the “scandal” over Trump’s phone call to the widow of the Black military casualty).

Almost all members of the Congressional Black Caucus voted for the impeachment resolution.  It was like a collective outburst of primitive rage.  This included the following CBC members:

These people are not our friends.

The Democrat leadership are not even in favor of this impeachment movement (yet).  Treacherous as they are, Nancy Pelosi and Chuck Schumer realize that impeachment is neither feasible nor justified.  “Now is not the time to consider articles of impeachment,” Pelosi said; implying that perhaps later would be the time.  Presumably they would welcome a different political situation in which they could impeach, but they’re at least savvy enough to know that at present it is a wild and impetuous move.  Their Black pets in Congress do not understand these dynamics, and instead act on their childlike emotions.

In sum, it appears that Blacks think that non-obsequious behavior towards them merits impeachment and other reprisals.  When any group is subjected to such undue praise, they tend to lose contact with reality.  One sees this phenomenon with beautiful women, who have it so easy that they no longer negotiate the world on a rational basis.  Likewise with Blacks, who have been so immune to criticism for so long that they have forgotten that they are not in fact above reproach.  With luck, they will soon learn to adjust to this new reality.