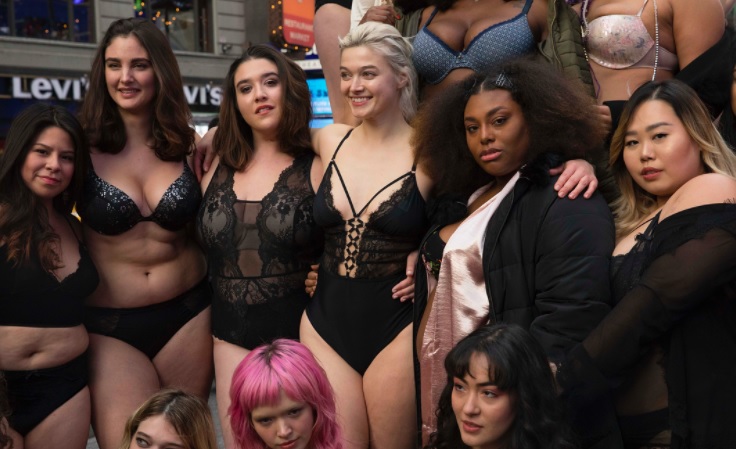 The Dangers of Attention-Seeking Women

Analyzing another case of feminists trying to destroy beauty standards, as well as delving into the thought processes behind female attention-seeking.

Victoria’s Secret is the latest target for destruction by the hordes of incorrigible hambeasts and their cucked male enablers.

Accused of racism, fat-shaming, and cultural appropriation, the multinational lingerie brand worth $1.9 billion has become the newest nemesis of bitter feminists who seek to “diversify” the available bras and underwear so that women the size of small hippopotamuses can drape their fat rolls in tent-sized hot pink lace and take Instagram selfies of their cellulite-stricken rear ends to attract the attention and money of weak men.

Every year when the Victoria’s Secret Fashion Show nears, spiteful women gear up to write dozens of opinion pieces for liberal news sites about how offended they are that a company would dare hire youthful and fit young women instead of irascible pot-bellied slags to model their lingerie on the runway. Every year around this time, sane society is inundated by the same rantings — size 16 is the new normal! I’m beautiful no matter what I look like or what life choices I make. I deserve this. I want this. It’s my human right. Me, me, me.

It’s the usual tactic desperate women use to manipulate men into giving them sexual attention and resources. The hatred towards young and feminine Victoria’s Secret models goes beyond mere female jealousy, however, as these outcries and demands for “equality” fit into the larger goals of modern feminism which are openly Marxist. For equality to be achieved, men must be relegated to subservient positions in relationships and the workplace. The fabric that holds together the nuclear family needs to be destroyed, and so a reprogramming is required of what qualities are considered desirable and attractive.

The good thing is that feminists took their crusade beyond the realms of the internet this year and overplayed their hand, as they always do. An Anti-Victoria’s Secret Show was organized by two New Jersey sisters who invited a selection of diverse women, including dwarfs and the disabled, to have them strut around in little clothing while a gesticulating gay guy sang them generic love songs.

Some of the women were on the verge of tears, speaking in quivering voices as they talked about how unfair the world is for not letting them be real lingerie models. Perhaps they ought to find fulfillment in a different life path?

Another event called “The Real Catwalk” was held on Times Square where a bunch of women in lingerie held a fashion show in the icy weather.

The Revelist’s coverage of the latter event includes the text “This is just as beautiful… as this!” between two photos — one of the feminist protesters, and one of Victoria’s Secret models on the runway. That’s right, men, the message is that you are not allowed to prefer healthy feminine women over fat scowling ones.

Time will tell if Victoria’s Secret releases an apology to obese feminists for excluding them from their brand. If the company does cave to the pressure, they are setting themselves up for massive ridicule and financial failure, as we can witness with Barbie, which has had sales drop by 15% this year since producing lesbian, fat, and Muslim dolls.

Thank you @Mattel for announcing me as the newest member of the @Barbie #Shero family! I’m proud to know that little girls everywhere can now play with a Barbie who chooses to wear hijab! This is a childhood dream come true ?? #shero pic.twitter.com/py7nbtb2KD

For the record, Victoria’s Secret is in no way a saintly business (it’s owned by L Brands, the CEO of which is Les Wexner, a reclusive billionaire Jew) as it has aided in the mainstreaming of female sexual liberation and does encourage attention-seeking behavior. The models are not at fault, though. They are chosen precisely because they represent exquisite, youthful female beauty. It’s a quality that’s special because it fades quickly, and there is no harm in admiring it as one does any beautiful spectacle of nature. Since we’re not Islamists prone to sexual emergencies at the sight of a bare ankle, we don’t need to cover our women in burkas.

As women age, their true value is revealed in their virtues, mainly their ability to support a successful family. A woman should never place all her focus on her appearance and believe that her entire personal worth amounts to how many men she attracts when parading around in underwear in public. There will come a time when her beauty withers, and if she has not been careful with her life choices, she will realize that she has wasted a lot of her years when she could have been learning useful skills and building a stable foundation for the rest of her life. Basically: for women, don’t be attention-seeking thots (whether you are a liberal or a “traditional woman”). Yes, that was a hint at the Tara McCarthy, Lauren Southern controversy. Maintaining a healthy body size is important, and wearing lingerie for your husband can be great fun, but resorting to using your body for money and favors from strange men is a trap.

As for men, don’t donate loads of money to women on the internet in hopes they will date you. Remember the words of Les Wexner:

“What I have thought about, and continue to think about, is that we are specialty merchants and our primary skill is knowing about women.”