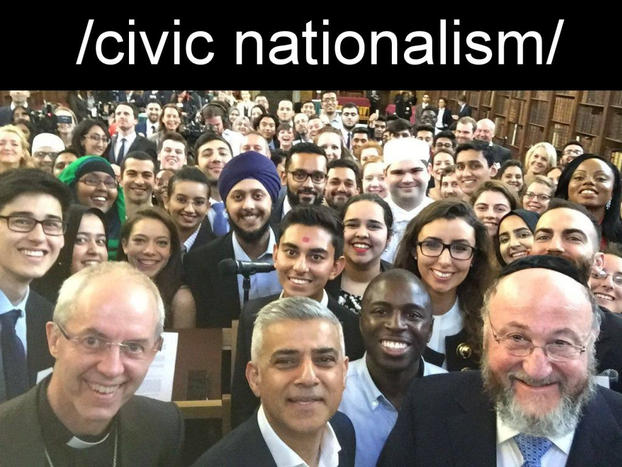 The Meaning Of Civic Nationalism

It's not a “right-wing” concept at all.

On the surface, civic nationalism may seem right-wing. In reality, Civic Nationalism—the belief that a nation is not a people but a set of values—is hostile to the very essence of nationalism.

Civic Nationalism is not Nationalism, it is classical Liberalism. Having borders and a nation is an essential premise of liberal democracy. As Andrew Sullivan wrote in New York Magazine, “[t]he entire concept of a nation whose citizens solely determine its future—the core foundation for any viable democracy at all—is now deemed by many left-liberals to be a function of bigotry. This is the kind of madness that could keep them from power indefinitely.”

His point is simple, liberal democracy needs a nation with borders. Civic nationalism is not opposed to liberalism but essential to its success. Globalism is the radical left-wing of Liberalism while civic nationalism is the conservative “right-wing” of Liberalism. Both ideologies are grounded in the liberal myth of the tabula rasa, where mankind is no more than individual blank slates who can be molded into the perfect society if raised in the right environment and taught the right values.

The meaning of civic nationalism is to save the proposition nation by emphasizing “our shared values” and quelling identity politics that would rip the nation apart into tribalism. As the New York Times stated, the American experiment is “the idea that people from all races, ideologies and religious sects would check their hatreds at the door after becoming citizens in our sustaining narrative.”

In contrast, ethnonationalism and racial supranationalism exist on a wholly separate plane of political thought, where history, biology, demography, and hierarchy determine the meaning and destiny of a nation.

Not only does civic nationalism deny the reality of race, it fails under its own premise. What are these “shared values” that unite us—Liberty, Equality, the Rule of Law? Does anyone believe this? Liberty and Equality are contradictory principles, often diametrically opposed. A nation defined by conflicting values is absurd. The logic of the proposition nation implodes under the slightest scrutiny, yet this is what we are told makes America great.

The truth is that “our values” are not liberty or democracy. What really unites America is anti-white animus under the veil of “equality.” White privilege, anti-racism, diversity, multiculturalism, open borders, these are the values that define America according to our ruling elite.

If you don’t believe in such values, then you’re a “racist” and “un-American.” When our ruling elite calls us “un-American,” they are embracing true civic nationalism. If you do not believe in the values of the proposition nation, you are perforce no longer a citizen of the nation.

Wherever the Alt-Right has gone, we are met by the same reaction: Not Welcome (usually accompanied by recitations of “refugees welcome”). These are not mere words, but threats backed up by action. Charlottesville enforced their declaration of “not welcome” by physically removing us from their park and town altogether. We were not Americans in their eyes because we reject the values of their proposition nation. Thus, we could be removed from their city and denied the very human rights of freedom of speech and association they profess to worship.

Such illiberalism is not an aberration. The great irony of liberalism is that it functions illiberally, unable to tolerate the ideological other. It is religious in nature, the proposition nation operates like a theocracy. The foundational values that form the basis of the civic nation become the “civic religion.”

In America, this civic religion has replaced Christianity. Some call it Holocaustianity, given the sacrosanctity and infallibility with which the Holocaust is revered, and the fact that any pro-white sentiment is deemed barred by the implication that it will inexorably lead to thegaschamber. In this civic religion, whites are born with the original sin of racism for which they must atone by handing over their country to nonwhites. Hitler is our Satan, Nazis our demons, and MLK our Jesus, redeeming us from our white supremacy. Professors, politicians, and intellectuals are nothing more than monks, bishops, and priests enforcing the orthodoxy. Universities are their churches and virtue signaling is their sacred rite.

Like most universal dogmas, Liberalism is a religion that cannot accept the other. Convinced of its own moral supremacy, anyone that rejects liberalism and the propositional ideal is therefore an evil heretic to be purged of their sin. Reason, open debate, tolerance, these are ostensibly the enlightenment values of liberalism. The “intolerant left” is a meme, however, because liberalism is anything but tolerant or open to debate with its enemies. Dissenters are traitors to the faith, and thus the country itself. Racists are reprobates who must be burned at the stake through Media campaigns of doxing and demonization. There can be no reasoned debate with that which is immoral, it must be destroyed. Tony Hovater is a prime example. The faithful went apoplectic over his New York Times profile, enraged that he was not dehumanized and painted as a vile subhuman for his heresy. Zealots then had him fired from his job and forced from his home.

To espouse white identity is to be a “racist” and “un-American,” which is why “un-American” and “not our values” appear in tandem when the establishment attacks us. This is the meaning of civic nationalism. It upholds the propositional ideal of our civic religion, which is predicated on the downfall of our people.

Case in point is the Alt-Lite. These civic nationalists were supposed to bridge the gap between Conservatism and the Alt-Right. Instead, the Alt-Lite acts as a final barrier to us. We are “un-American” to the Alt-lite in the same way the Left sees us. The chasm between ethnonationalism and civic nationalism is unbridgeable, we repudiate the very civic religion they seek to save.

MAGA is merely a tent revival. An attempt at reawakening “our values” to overcome and transcend the racial divide tearing America part. Yet, no religion has ever overcome racial differences. Churches remain strongly segregated along race and culture. Our civic religion is no different. MAGA is hated by nonwhites because the values of deporting illegal immigrants, building a wall, and banning Muslims are “racist.” Trump’s attempt to shift the national narrative and re-write our civic religion away from anti-white animus towards colorblind patriotism and individualism is vehemently opposed by the reigning orthodoxy. Trump’s reformation has been met by shouts of “crucify, him.”

Trump is not their President in the same way we are “un-American.” Even if Trump were to succeed in his reformation (redefining our values towards colorblind meritocracy), our demographic doom would not change.

Ultimately, civic nationalism is untenable and will give way to tribalism. Real nationalism can only be centered around race, family, and kinship. Without it, there is no such thing as a nation. America is a people, not a set of values. We are Europeans, descendants of the people who settled and pioneered the North American continent. That is what it means to be an American. Everyone else is just visiting.