Myanmar Is Right, The US Is Wrong

Does an oncologist apologize for curing cancer?

Not all brands of Islam are equally odious or oppressive to be sure, but they’re all odious and oppressive to one degree or another. Find me an oncologist who accepts the gradual spread of cancer around the human body, and I’ll show you a man in dereliction of his duty. It is the duty of a doctor not to accept the gradual spread of a cancer but to root it out completely, so as to cure the patient. Myanmar has it right. America has it exactly wrong.

The Burmese government is removing cancerous Bengali Muslim invaders (a.k.a. the Rohingya people, and more recent Bengali imports who are ethnically indistinguishable from the Rohingya, whom globalist propagandists have recently labeled “economic migrants” out of convenience. Sound familiar?) Some of these Muslims have been in Myanmar for many generations, but most have been stealthily entering the country over the the last few decades because Myanmar offers Bengalis better economic prospects than overpopulated, overwhelmingly poor, natural disaster prone Bangladesh. In recent years, inter-ethnic conflicts have broken out in the west of Myanmar as well, between the Rakhine and the Rohingya. You know — riots, lynchings, mob assaults, all that fun stuff.

More perks of diversity and multiculturalism, it seems! 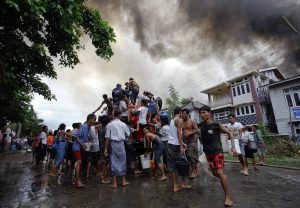 The Muslim Rohingya, with their basic lack of respect for women, along with their own Islam-inspired, predictably aggressive customs and attitudes, including their high reproductive rates, are a thorn in the side of the predominantly Buddhist nation, and especially of the local, predominantly Buddhist Rakhine people who are forced to live with the Muslim Rohingya and the filth they ceaselessly generate in the extreme west of the country. The Burmese people it seems aren’t “educated” enough to understand that gang-rapes, a thriving drug trade, and widespread, deeply entrenched poverty are definitive proof of “cultural enrichment”.

At the end of the day, the Burmese government is doing its duty to its people. The people of Myanmar have nothing to gain by letting Islam spread into their territories. The Rohingya and the Bengali migrants who hide among them are a net loss to the Burmese economy and are a cultural cancer.

Humanity is best served when Islam is on the retreat.

International laws against ethnic cleansing are a sham. Indeed, mass-scale illegal immigration into many (mostly white) countries around the globe, which our Cultural Marxist overlords can’t help but laud, could itself be described as a form of ethnic cleansing. For example, how is the ongoing illegal invasion of California, all in defiance of the laws and sovereignty of the American nation, demographically transforming the state into a perfectly unrecognizable society, not itself “ethnic cleansing”? How exactly is this coercive, unlawful invasion and complete demographic makeover not ethnic cleansing?

How’s about it is.

Let us also not forget that history is replete with ethnic cleansing events. Virtually all territories today occupied by particular peoples or races, were once conquered by extreme violence which involved the removal of their then occupants. Americans do not need to accept their own displacement and conquest by invading Islamic or Latino hordes, and neither do the native people of Myanmar. If Burmese Buddhists wish to tolerate certain minority groups like christians in their midst, which they in fact do, because they have no qualms with their presence, all the better, but they need not accept the presence of peoples that hate them or who are nothing but a burden on their nation’s finances or social stability. Burmese Buddhists deserve their own nation and territory and so too do whites. Verily, I would argue that white people are even more deserving of any territory they currently occupy, because where white people go, human flourishing and progress follow. White migration is the antithesis of Islamic migration from a utilitarian standpoint. No group has done more for humanity. 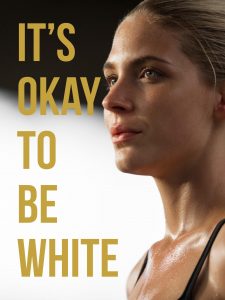 Furthermore, what the Burmese government is doing is really only one rational step beyond what white Americans and white Europeans are today demanding from their own insane, unresponsive, Cultural Marxist totalitarian governments. We want our borders secured. We want the invaders deported. We don’t want to have our democracies and destinies hijacked by hostile foreign hordes. Because the Western World’s immigration policies are tyranny and ethnic cleansing under the banner of humanitarianism and rule of law. And frankly, as a white, Western person, I’d prefer not to live under a government that hates me and wants to eliminate me from the Earth in the name of diversity.

It is not wrong to drive Islam from your lands. Morally it is right, it is good, and it is a boon to actual human progress. It is long past due that white Westerners learned the lessons of their ancestors. The laws of nature haven’t changed. Islam wants to spread. It wants power, it wants resources, it wants territory, it wants your daughter’s womb. In that way, Islam is far more rational than modern leftism. And none of this is hyperbole. The Burmese people and their government recognize the Islamic threat for what it is. And it is a very serious threat, and its effects on the rest of society will be significant whether all Muslims are radical fundamentalists or not. The Burmese people have not been rendered fools by political correctness and Cultural Marxist brainwashing. They are not ready to go quietly into that good night. They are not willing to watch their nation become Southeast Pakistan. So they’re doing something about it. 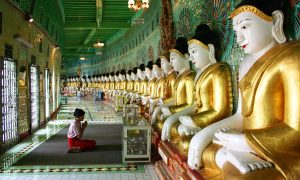 If anything the Burmese government should be praised for its firmness and its will to do what is necessary to protect its people and its civilization. It should neither be sanctioned, smeared, nor denounced for its actions. Rex Tillerson, the US Government, and the rest of the Western World have it all backwards. Which is why we are going backwards as a people rather than forwards. Young Burmese women have a future that doesn’t involve being turned into the sex slaves of out-group psychopaths. Which is to say they are better off than young white women in Rotherham or Hollywood. Yet Western governments are good and the Burmese government is bad?! Sorry, I just don’t see it.