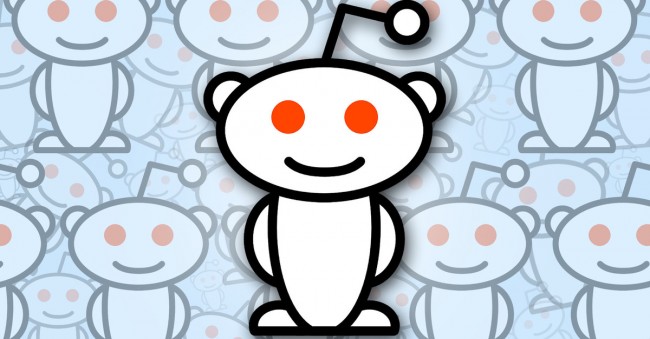 Language Policing Is A Weapon Of The Left To Disarm Whites

How SJWs use language trickery to batter down our defenses.

Why is it that we change words every few years as old ones get “offensive”? Why did “black” become “african-american” only later to “people of color”?

Think of new words and social changes as insignificant in of themselves (new “X rights” movement), but as stemming from a key behavior of unproductive social change. This amounts to social disruption for social control. Everything SJW’s say is meaningless, dismiss it, look instead at the social results.

Language disruption (taking away peoples ability to meaningfully communicate with one another) is done via constant disruptive changes. It’s a manipulation tactic that abuses high verbal working memory capacity to disadvantage and socially overpower people without it.

It ends up reshaping the cultural/social environment to attack and undermine most people and selectively reward those who are verbally gifted.

Language is about communication. Languages are communicated via words, words which have meaning. Similar typed words or “synonyms” are a way to allow individuals to express different concepts. From a psychological POV, working memory synonyms are a form of “Chunking”.

“Chunking” is a working memory strategy that allows people to effectively think, organize, and communicate their thoughts via giving meaning to similar typed concepts.

For example; it’s easier to remember 867-5309, than it is to remember 8675309. The separation/linking is a mental process that gives distinct meaning to the linked elements (individual numbers).

Ashkenazi Jews, in particular, are gifted with extremely high verbal working memory and so have less of a reliance on “chunking” for communication than gentiles.[1]

By reshaping the means of communication (language, meaning) with various tools (“oh that’s offensive”, etc) they disrupt the basis of communication and psychologically undermine the victims. Like where this gentleman Jew on Reddit writes this spiel:

“First of all, race doesn’t exist. It was made up by Europeans to make people from outside of Europe seemless than Europeans. That being said, **tons of Jews identify as being racially or ethnically Jewish, and indeed that is supported by genealogy. So why can’t people accept that some Jews don’t want to identify as White/Arab/etc, but Jewish?

This is an example of this concept wherein the psychological abuser schizophrenically attaches and detaches meaning at will from the words used. It’s also a structural form of gaslighting.

“Narcissists are puppet masters who manipulate their victims for personal gain. With precision they are able to “pull the strings” of their victims without detection, and render them helpless.”[2]

Ever wonder about the personal gain these people have from promoting “tolerance” and multiculturalism? 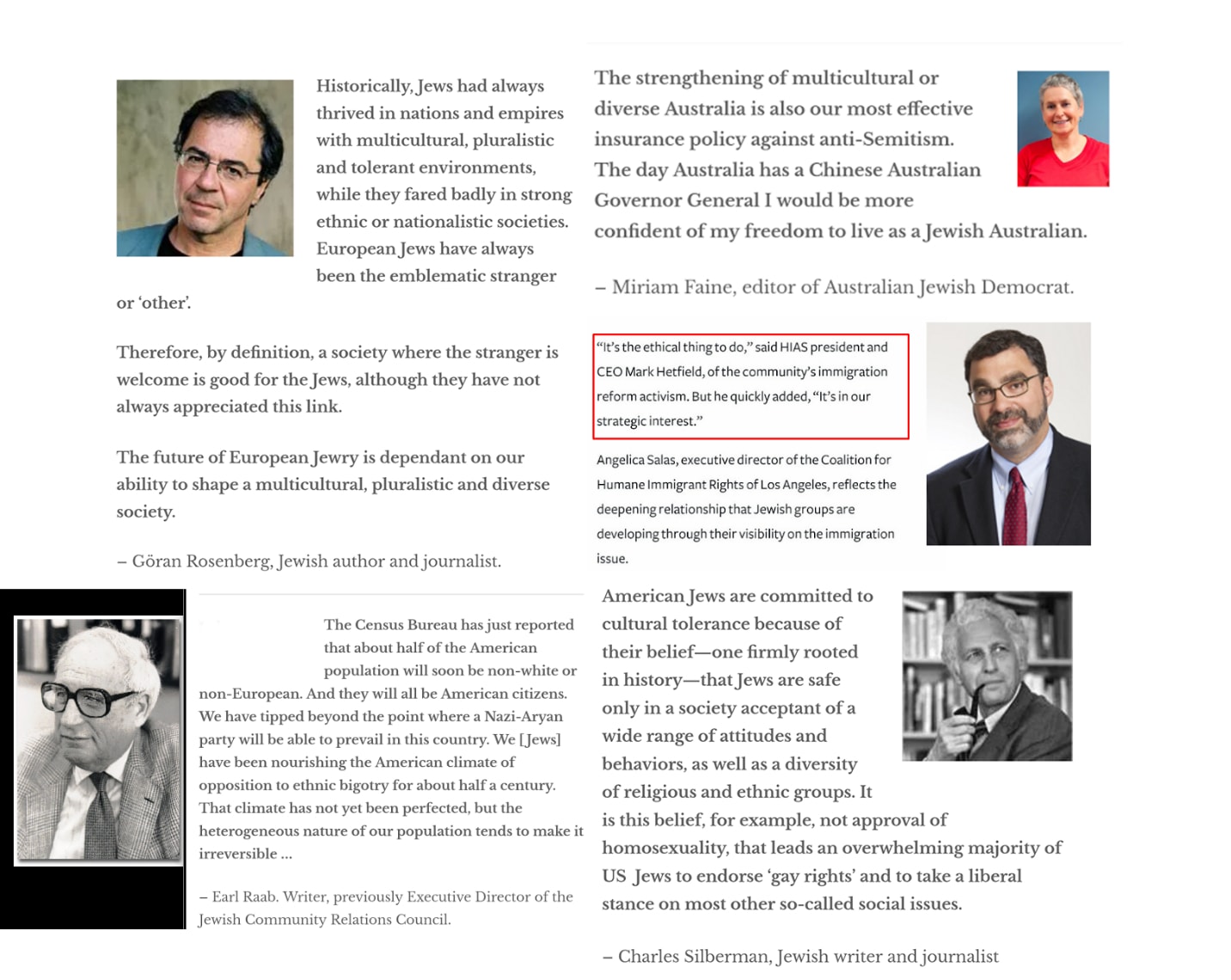 This selectively and psychologically empowers high verbal working memory at the expense of people without high verbal working memory. This also empowers parasitic exploitative behavior. The implications for this are not limited to Jewish individuals, of course, there are many non-Jewish people able to actively utilize these tactics, and even within Jewish groups the ability isn’t necessarily malevolent in Jewish collectivist groups (living on their own in religious communities, living in Israel and loyal to Israel, assimilated and 100% loyal to their country) but it ENABLES the secular individualist Jewish-supremacist section to essentially colonize and reshape other peoples cultures and governments.

Think about an “atheist Jew”. There are NO “atheist Christians” or “atheist Muslims”. An “atheist Jew” is someone who rejects all the responsibilities of the religion/ideology but values the racial aspect.

“Think of it as a nation without land (forget about modern day Israel). It has laws regarding who is a citizen, and a court system.”

“Jewishness passes through the mother. It is hereditary, non revocable. You are born a Jew you die one no matter what you do.”[3]

Again I repeat; every race has unique differences. This verbal working memory distinction does not inherently make Jews “bad” in any way. The context is everything. This is not an issue with collectivist Jewry who have their differences integrated into a social context and thus adapted it to a group morality setting.

This IS HOWEVER a dire issue with any and all “secular” anti-collectivist (individualist) Jewish people/organizations with ANY degree of power in society over non-Jewish individuals. Such a person will inherently harm others; they essentially have the power to influence people (verbal ability) but reject the responsibility of the outcome (collective morality).

Don’t think of this as biologically singling out Jews as a race; think about this as Jewish individuals having the potential to become incredibly manipulative pieces of shit. And thus in an uncontrolled environment (anti-collectivist) that set of destructive behavior will be selectively rewarded.

Again I repeat; genetics aren’t everything, they must be understood in CONTEXT. This is not an attribute that means every Jew as a race would be or are bad people. What matters is the context of the environment.

To take an extreme example, think of Hitler’s Jewish family doctor Bloch and his in-advertised life history for example.

According to Linz’s future mayor Ernst Koref, **Bloch was held in high regard, particularly among the lower and indigent social classes. It was generally known that at any time at night he was willing to call on patients.** He used to go on visits in his hansom, wearing a conspicuous broad-brimmed hat.

Like most Jews in Linz at the time, the Bloch family were assimilated.

Because of the poor economic situation of the Hitler family, Bloch charged reduced prices, sometimes taking no fee at all. The then 18-year-old Hitler granted him his “everlasting gratitude” for this (“Ich werde Ihnen ewig dankbar sein”).

The man has a consistent presence of unadvertised altruistic behavior without direct social rewards and this indicates some level of altruistic collectivist morality. Literally just being a nice person without needing to be recognized for it.

Compare that to Harvey Weinstein’s record.

Weinstein has been active on issues such as poverty, AIDS, juvenile diabetes, and multiple sclerosis research. He serves on the Board of the Robin Hood Foundation, a New York City-based non-profit that targets poverty, and co-chaired one of its annual benefits.

He is critical of the lack of gun control laws and universal health care in the United States.[4]

Everything is an “organization” or “club”. There is virtually nothing said of his character outside of that which he advertises.

This is a consistent phenomenon from my experience; the sociopathic type manipulative people have shockingly consistent behavioral patterns and with a bit of research can be (in my opinion) somewhat actively identified and even predicted.

I call the 2017 serial killer the “Jewish Dylan Roof” (obviously they don’t mention he’s Jewish) because of how he would sneak around and savagely murder homeless people for “thrill kills” in an extremely careful way[5];

”On Feb. 3, another homeless man, also nestled under a blanket to stave off the winter cold, was beaten to death as he slept in an open area near bushes. Again, it appeared the weapon was a hammer.

The similarities between the cases prompted police to set a trap: a mannequin, wrapped in blankets like a sleeping homeless man with his head covered, was placed where the first man was killed.

Police say the video captured the following: Schindler approached the mannequin, pulled his hood up over his head to conceal his face and slowly pulled out of the bag a 4-pound engineer’s hammer. Using both hands, he raised the hammer and swung it down on the mannequin’s head several times.

Most importantly look closely at the interactions this man had with police AFTER literally being caught red-handed attempting to murder a vulnerable target;

This is a great example of the sociopathic application of verbal working memory to enable exploitation. The man was literally caught and he still on the spot comes up with various attempted narratives to “deny his guilt”.

The non-advertised predatory behavior can be thought of as anti-altruistic collectivism.

However, the lesson here is important; the people who caught him were able to do so because they predicted and emulated his behavior and in doing so were to use his predicted behavior (attacking random homeless people) to set a trap.

The same concept of “trapping” can be used with shills with a pre-tested pre-conceived idea.

The “it’s ok to be white” stunt is a perfect example of a well-crafted trap. It is a well-designed idea based on the understanding that anyone attacking it would (and do) look like complete pieces of shit.

In my own personal experience I successfully utilized a trap on the “againsthatesubreddits” group wherein I used my own account (on which I often say incredibly offensive, controversial things) to “test” their response on getting a racist person to drop the hate; 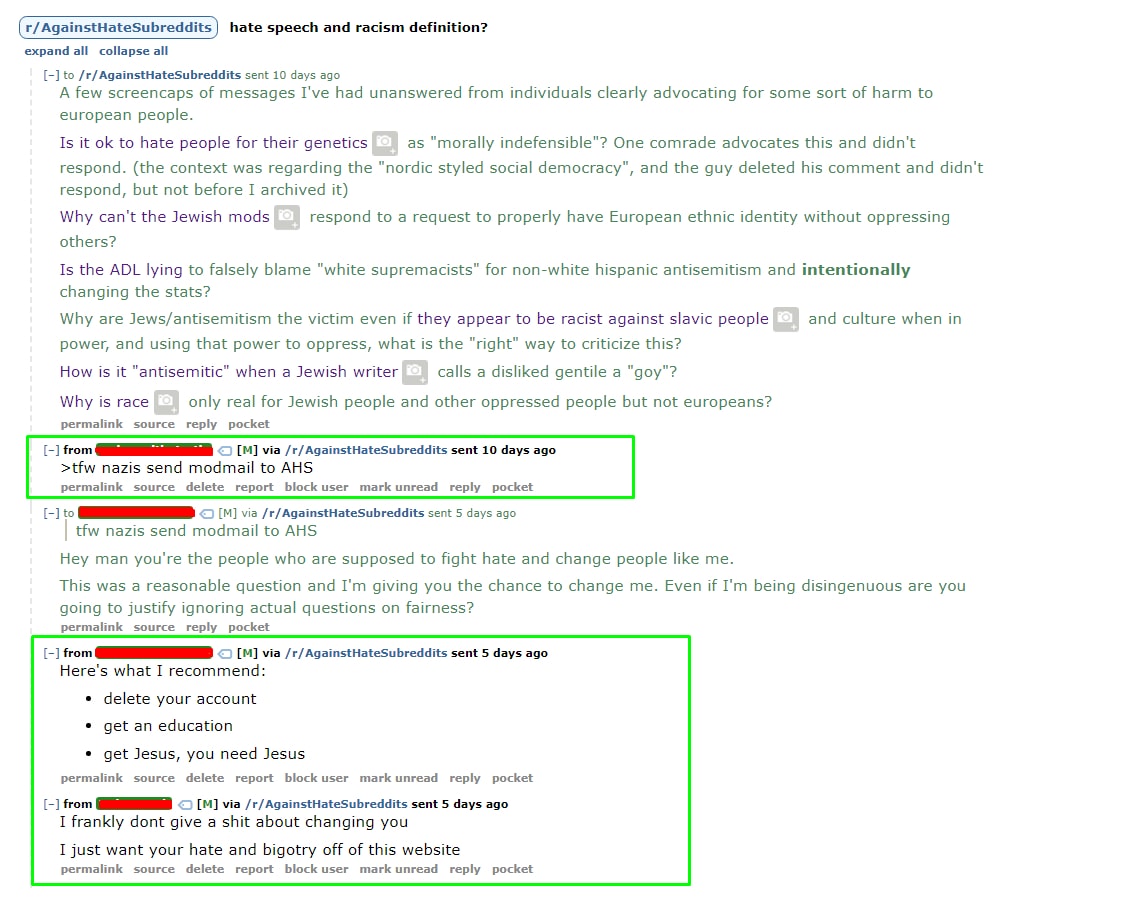 And as I assumed, they openly admitted to having no intent on “changing people” but rather just censoring people. And that is exactly how we can go about annihilating the cancer that is the social justice warrior movement. You have them take off their masks and reveal who they actually are – just people who want arbitrary power over others. They are incapable of answering countless questions, and raising those questions strips them of their percieved moral authority. Once they lose the appearance of moral authority they lose their power. 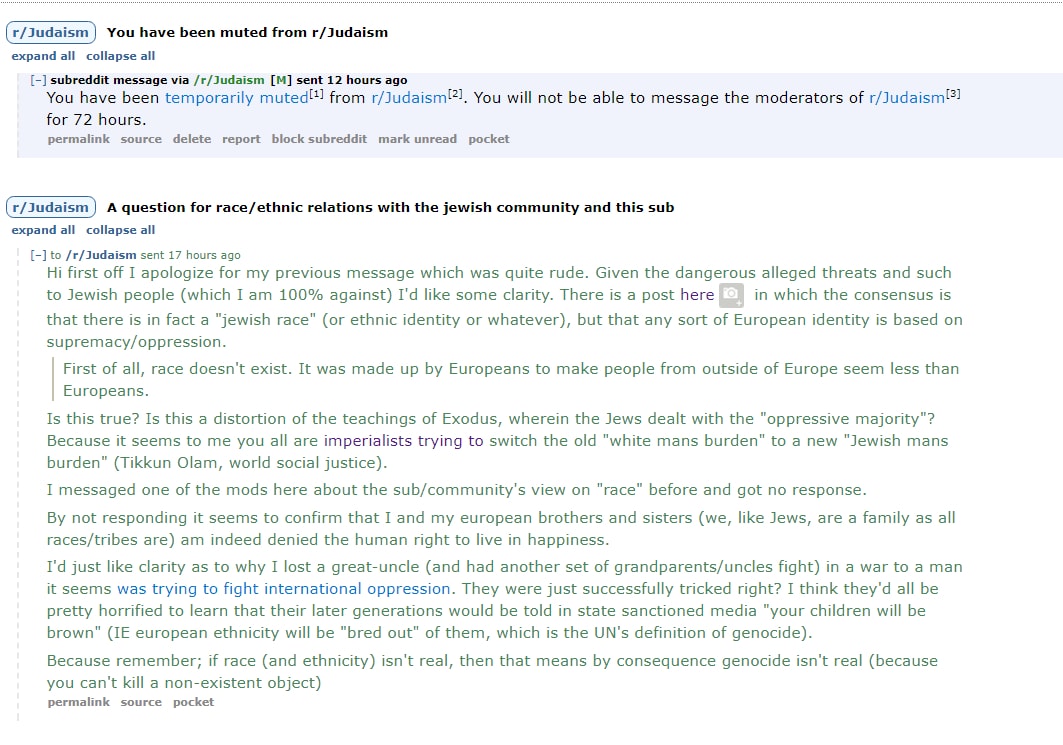