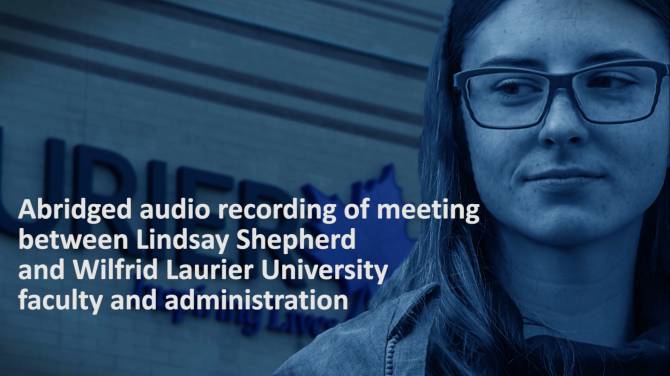 What’s the point of counter-signaling the Alt-Right, if you get lumped in with us anyways?

You have to check out this video. I wish that I had gotten it up in time for Thanksgiving so that you could keep it as an ace-in-the-hole against any loud-mouthed shitlib extended family.

This is some genuinely creepy stuff:

It’s recorded audio of the interrogation of some TA grad student who showed a Jordan B. Peterson video during some class where gender pronouns were being discussed.

The highlights from the interrogation don’t come from the TA’s teary defense (yes, she starts crying) but from the twisted logic used by the Bugmen and Valley Girl-accented ditz who try to gaslight the girl into believing what she did was wrong.

Had some serious flashbacks listening to this audio, fam. Flashbacks to the high school counselor telling me to stop getting into fights with the Vibrant Diversity at my school K-9… I recognize the exact same twisted cat lady logic at work here. Emotional manipulation by appealing to non-existent authority, victim role-playing and blatant peer pressure all coated in non-threatening NPR voice and ahm like, problematic, like ahm uptalk.

So basically they tell her that Jordan B. Peterson, a quavery-voiced, skinny-fat, cry-baby – may Allah forgive me for uttering this word – CANADIAN is some Alt-Right leader and that he is literally Hitler and that she is in big trouble for showing a video of him.

Here, Jordan explains what happened to her in his own words:

By the way, he makes me cringe.

Let me be real for a sec. I’ve tried to listen to his lectures, and I’ve managed to glean some insight from them. But most of it really is pretty basic bitch tier. Still, if it gets you into Jung and Archetypes and all that stuff, fine. I’m not trying to come off as a big brain nibba, but I feel obliged to point out that the man is just making classic liberal arguments against The Current Year and is a total shitlib at his core.

I like this one. From https://t.co/G4c1HJkWmy (Yes, I look at them. You would too, at least from morbid curiosity 🙂 ) pic.twitter.com/2WMwOhT5EB

But enough about Peterson, I’m just jealous that he makes 60k a month on Patreon role-playing as a father to lost Millennials… and I don’t.

The Commissars interrogating the girl bring up the whole Pantheon of Liberal sacred cows like global warming, the fight against “White Supremacy”, and non-existent rape culture to justify their heavy-handed censoring.  It’s as if to say, “if you disagree with us on this Jordan Peterson thing, you are a knuckle-dragging Global Warming denier.”

And I can’t stress this enough – she isn’t making any Alt-Right talking points.

All she did was show a Jordan Peterson video where he argued against forcing people to use gender pronouns.

Last I checked, the man has already backed down and stopped insisting on there only being two sexes and just insists that people shouldn’t be forced to call you a she when you’re a he.

As usual, the girl doing the interrogating is the most earnest and hard-edge, while the soy boys are much softer, but even more emotionally manipulative, trying to trigger that White Guilt ™ reflex they know lurks in all Western Whites.

On a sidenote: if you’re a fuckin’ White Male you should actively strive to kill off your guilt reflex because it simply does you no good in 2017 and is a huge gaping vulnerability that modern-day White people have. It’s like the exhaust port of the Death Star that has been actively widened and left defenseless by Jewish rhetoric over the years. And as a bonus if you get rid of your shame response as well, but remain true to your own purpose, you can become the much-vaunted Nietzschian man that everyone likes to think about…but that’s for another post.

Now, I know that the girl being interrogated isn’t really Alt-Right, but we live in clownworld, so I guess she is now.

And at this point, I can’t help but wonder what’s keeping her from just fashing out? No seriously, why do Alt-Lite folks do what they do when they go out of their way to counter-signal us? Does it salve their bleeding consciousness to be able to point to us and say, “those are the Nazis, not me!”

But who is even listening at this point? Anonymous spies can report you for counter-revolutionary kulak behavior just for showing a video of a guy not keen on indulging tranny delusions.

That’s some serious shit and it’s not even a meme anymore. This is stuff that legit happens now. Take a listen to that video again if you don’t believe me.