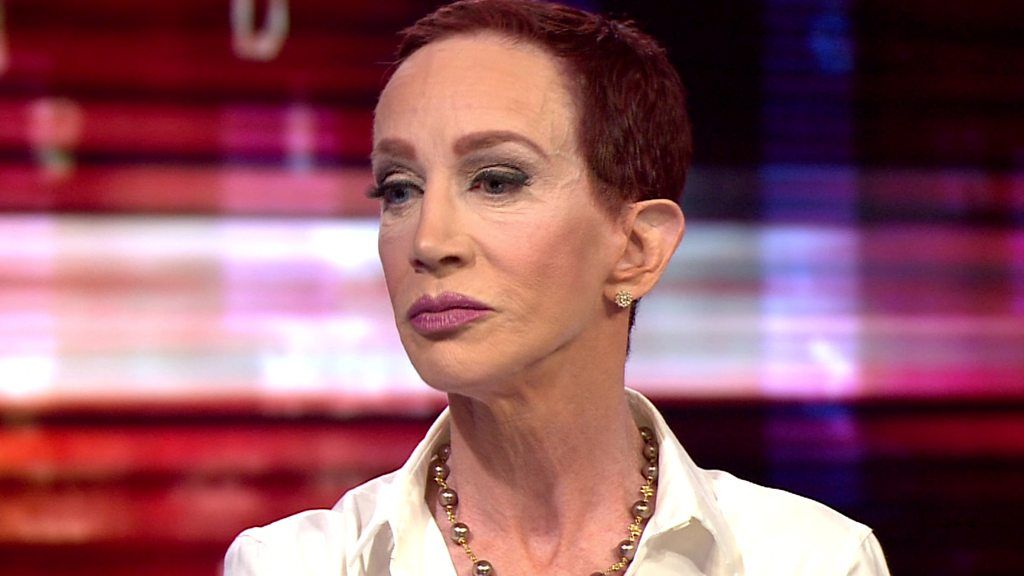 Kathy Griffin returns for another exciting episode of insulting Trump while pretending to be a victim.

When 57-year-old Kathy Griffin decided to work with provocative photographer Tyler Shields and produce the infamous “beheaded President” shot this May, she knew perfectly well how sick and wholly inappropriate it was.

As the photo began to spread around the internet, friend and fellow Trump-hater Rosie O’Donnell called Griffin to warn her to take it down and apologize, but she would have none of it. Griffin knew she was doing a horrible thing and thereby setting herself up for vast criticism, even putting her career on the line, and yet she joked with Tyler Shields during the photoshoot: “We have to move to Mexico today ’cause we’re gonna be in prison. We’re not surviving this, ok?”

As the days passed the entire political and entertainment establishment distanced themselves from her, including old friends like Anderson Cooper, and venues refused to host the remainder of her comedy tour. Only then, to save her skin, did she backtrack and offer insincere apologies amid irritated jibes at the Trumps, claiming they were trying to ruin her life. During a press conference on June 2, Griffin unwisely appeared with feminist civil rights lawyer Lisa Bloom (famous for representing Bill O’Reilly’s sexual assault accusers, while also guiding Harvey Weinstein through his own sexual assault woes in return for a movie deal), and the two held a rambling passive-aggressive discourse which included gems like the following from Griffin:

I’m not afraid of Donald Trump. He’s a bully. I’ve dealt with older white guys trying to keep me down my whole life, my whole career. I’m a woman in a very male-dominated field.

I’ve had everybody turn on me, and I just want to make people laugh.

Cut the crap. This wouldn’t be happening to a guy. This is a woman thing.

Lisa Bloom’s own remarks were even better. She should really get a job in public relations when her lawyer career tanks:

It is Trump who should apologize … for being the most woman-hating and tyrannical president in history.

It is not the job of a comic to filter everything down for an 11-year-old. (A reference to Trump’s son Barron, 11, who apparently was traumatized by the photos.)

Griffin has since had a public falling-out with Bloom, accusing her of “fame-whoring” and charging $40,000 for two days of representation. I can’t say I’m surprised since Bloom courts controversy and destruction whenever she opens her mouth.

Now, six months later Kathy Griffin’s career is in ruins. All her American sponsors and promoters have cancelled future projects with her, venues refuse to host her shows, even CNN dumped her as one of the presenters of their New Year’s Eve show. Griffin has also sold her $4.5 million Hollywood Hills home, and is now scraping up some cash from a comedy tour in Australia and Europe which is receiving low to mediocre reviews due to her ranting about nothing but Donald Trump and assorted celebrities. During her November 9th show in Dublin she fainted on stage, while two days later in London she cried while talking about being investigated by the American Secret Service.

Griffin has repeatedly said that she “takes back her apology 1000%,” and while on her comedy tour, she has been telling any journalist who will listen to her what a “Nazi” President Trump is.

I said the president was a Nazi in a jokingly loving way, except that he is… I can’t stand how all these American so-called journalists are dancing around it. This is a guy who sanctioned a Nazi rally in Charlottesville where a woman died.

She’s now back in the news for creating a five-minute Youtube video called “State of the Union” where she whines about “white privileged old dudes” and being a victim of “ageism,” and that once she finishes her European comedy tour she does “not have one single day of paid work” in front of her. She claims she has been blacklisted in the United States, and that “this wall of crap has never fallen on any woman in the history of America the way it has on me.”

It really is fascinating to watch how committed Griffin is to playing the victim and doubling-down on her nasty behavior. For the past six months she’s been lashing out at various celebrities, especially Andy Cohen who is replacing her at the CNN New Year’s Eve show, and whining about being stopped at airports by Interpol.

What can we take away from this whole ridiculous charade? I find that what is more distasteful than the beheaded Trump photo is Kathy Griffin’s absolute inability to take responsibility for her actions. Her victim mindset is one that many women have adopted — thinking they can get away with the most disgusting and insulting behaviors by manipulating the narrative in order to end up as a victim. Playing The Eternal Victim card is a sure way to end up permanently miserable. For Kathy Griffin, it seems like becoming a raving old unrepentant hag is the only option her withered spirit allows. May she retire quickly.

First of all, the accidental president is what I call him. He is not here, is he? Because I’m scared of that guy. I was under a two-month federal investigation for taking a picture of a mask. Yes, I’m excommunicated from my own country, so I’m here [in Australia] doing a world tour. We have to make fun of him because he is so ridiculous and dangerous. And I actually have known this fool. I am going to call him a moron and also a Nazi. Americans are like skittish about calling him a Nazi, but he is a Nazi. There’s a Nazi in the Oval Office. I just have some news for you so heads up.