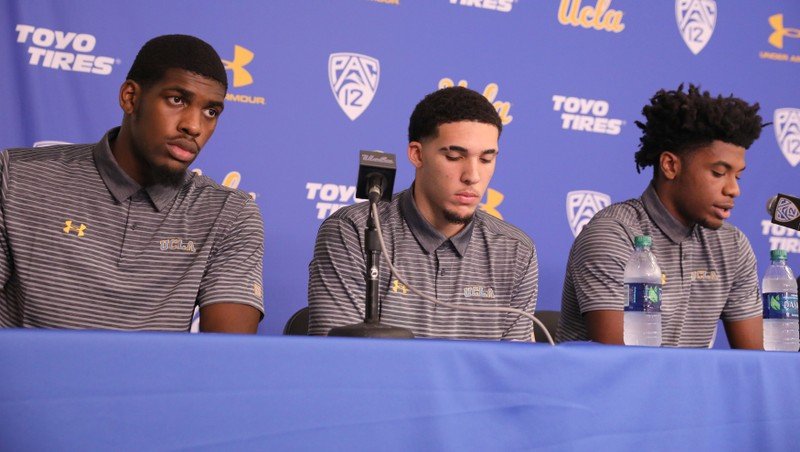 After brief spell of gratitude, Blacks return to form.

It’s a funny move to tell someone to say “thanks” when they’re too dumb/ungrateful to know to do so themselves.

Like when you hold the door for someone, and they just walk through without a word as though you’re their doorman.  It’s a little aggressive, but in this situation my response is a sardonic “you’re welcome” as they enter the building.  Hence President Trump is a man after my own heart.

After three Black basketball players, LiAngelo Ball, Cody Riley and Jalen Hill, were arrested for shoplifting sunglasses of all things at a Louis Vuitton store in China, Trump put in the good word with Chinese President Xi Jinping.  Ultimately the players were released, at which point Trump expressed the desire for a little gratitude:

Do you think the three UCLA Basketball Players will say thank you President Trump? They were headed for 10 years in jail!

It seems that Trump is wasting his political capital with China on things we don’t particularly care about: North Korea, basketball players, etc..  Nonetheless, in an amazing show of decorum and humility (relative to the usual Black standards), the players did in fact give thanks to the President at a press conference: “To President Trump and the United States government, thank you for taking the time to intervene on our behalf. Thank you for helping us out.”

I’d say it was a legitimate apology from all three players.  But soon after, the father of one of the players, media personality LaVar Ball, returned to form:  “What was he over there for? Don’t tell me nothing. Everybody wants to make it seem like he helped me out.” Now that’s more the tone that we have come to expect from Blacks.  But he gets even more sullen and resentful:

As long as my boy’s back here, I’m fine. I’m happy with how things were handled. A lot of people like to say a lot of things that they thought happened over there. Like I told him, ‘They try to make a big deal out of nothing sometimes.’ I’m from L.A. I’ve seen a lot worse things happen than a guy taking some glasses.

Denying any wrongdoing, minimalizing the crime, being ungrateful for leniency.  This is the origin of the appellation “Dindu,” which says so much with just two syllables (hat tip Daily Shoah).

Let’s just put aside the stupidity of stealing sunglasses when you’re a wealthy sports star.  Let’s not even mention our regret that we don’t deal with our criminals as swiftly as the Chinese.

One of my missions as a writer is to show Americans across the political spectrum that Blacks are against Trump with the same anti-White vitriol that they apply to other aspects of their lives.  Yes, it is amusing that Trump did slightly better with Blacks (8%) than Romney did (6%).  Nonetheless, if you have any real-world contact with Blacks, or if you simply observe their comments through the media or online, you will quickly become disabused of the notion that there is a multitude of conservative Black allies out there. They’re against Trump; and therefore one cannot help but to notice that they’re against us.

Now that the three basketball players are out of China and saved from years in jail, LaVar Ball, the father of LiAngelo, is unaccepting of what I did for his son and that shoplifting is no big deal. I should have left them in jail!

Shoplifting is a very big deal in China, as it should be (5-10 years in jail), but not to father LaVar. Should have gotten his son out during my next trip to China instead. China told them why they were released. Very ungrateful!

TopicsDonald Trumpsportsball
Share on FacebookShare on TwitterShare on RedditShare on VKontakte