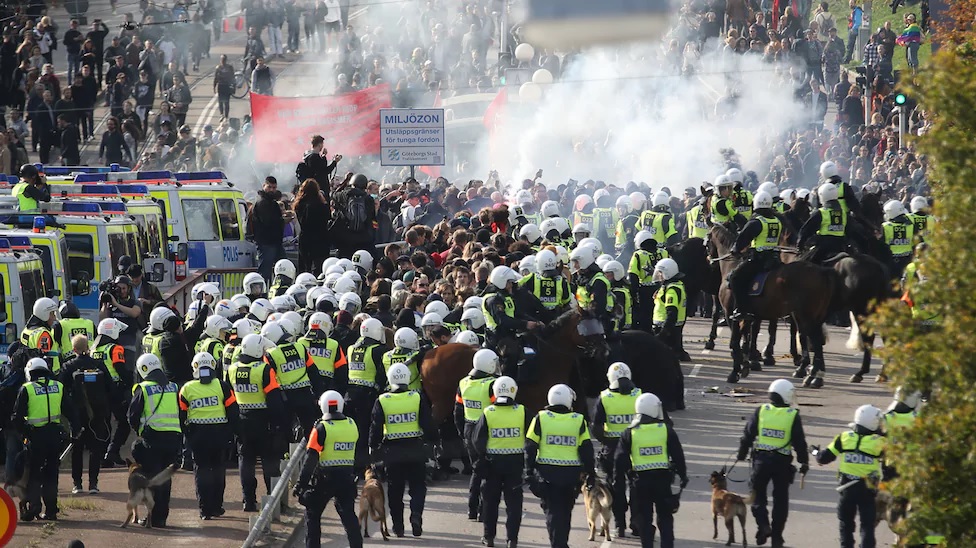 It’s always with the Left.

Despite their relentless exertions to portray themselves as the moral crusaders of our age — defenders of children, women, and minorities; 99% of the time it is those on the Left who are discovered to have the worst sexual perversions and crimes hiding in their closets.

And so, today we can add another example to the lengthy list of leftist sexual predators — this time a leading Swedish Antifa member who, aside from spurring unruly mobs into throwing rocks at police, carries the achievement of being a convicted serial rapist. Furthermore, taking a glance at photos of the man is enough to see that he’s another one of those criminals who’s “Swedish” in name only.

According to news site Fria Tider, The 34-year-old man lives under a protected identity nowadays, but at one point the media dubbed him “The Humlegård Man” due to raping a woman in the Stockholm park of Humlegården in 2005. He has served a further two jail sentences for sexual assault and rape — first, a six-month term in 2003 for assaulting nine women within three hours in Malmö, and secondly for attacking a woman in Stockholm for which he got out of prison after a few weeks. In total, police have a dozen separate cases of violent sexual assault or rape against the man.

The rapist, along with ten other Antifa counterprotesters (including two rock-wielding Somalis), is now charged with violent rioting and assault against persons in authority. The case’s prosecutor claims the rapist “acted as an inciter” who encouraged other Antifa members to commit violence while attacking the police himself.

This all happened on September 30, 2017, when several hundred members of the Nordic Resistance Movement held a legal, peaceful demonstration in Gothenburg to protest Swedish immigration policy. They were challenged by the dysfunctional hordes of Swedish Antifa along with their pet migrants. The rally ended in a chaotic police intervention, with leftists scrambling about, attacking anyone who might be seen as a “Nazi” — i.e., anyone with normal clothing who has taken a bath and gone to the gym in the past week.

When interrogated about his reason for attacking police, the rapist stated: “I wanted to show my disgust for the Nazi demonstration. I did not intend to take any aggression against the police.”

When further pressed and presented with video footage that clearly shows him throwing several rocks at police and gesturing for other left-wing rioters to move forward, the man acknowledged his actions, but said the “Nazis” caused too much aggression in him, and as a result he mistook members of law enforcement for the Nordic Resistance Movement.

“I understand they (“Nazis”) are entitled to exist, but I don’t think they should be demonstrating. I was exposed to racists and Nazis during my upbringing. That’s why I hate them.”

For those interested, here is a video of the September 30th Gothenburg demonstration: