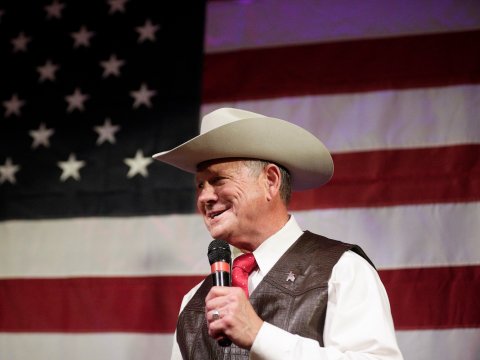 In light of the evidence, one must concede that it is at least possible that Alabama Senate candidate Roy Moore is guilty of cavorting with underage girls.  But you know what?  This is not the time for self-righteous moral posturing.  We’re in a dire struggle here, so let’s not take our cues from the treacherous mainstream media.

Yet more and more accusations are being thrown at Moore:

On Monday, the controversy surrounding Moore deepened as a new accuser came forward alongside attorney Gloria Allred — who has represented dozens of women who have brought charges of sexual harassment or assault against famed men, including Trump. Beverly Young Nelson said Moore sexually assaulted her one night after work when she was 16 years old.

Moore had offered to give her a ride home after her shift at a local diner upon noticing that her boyfriend was running late to pick her up, according to Nelson’s account.

But instead of driving her home, Nelson said he parked the car at the back of the restaurant, where “there were no lights,” and began groping her.

So what to make of these allegations?

It’s tempting to support Moore merely on the basis that Mitch McConnell, Paul Ryan, Mitt Romney, and the other shills are against him.  It’s also tempting to support Moore because this scandal seems like an obvious set up by dubious leftist entities.  Certainly this is a dirty trick on some level to snatch deep red Alabama from under our noses. But due diligence requires us to address the moral implications of the matter at least a little bit.

Firstly, there’s the issue of these retroactive remembrances of sexual harassment.  We give women pretty wide latitude when they’re allowed to lodge their complaints literally decades after the fact.

This begs the question: Do women have objective standards of morality, or do they simply take their cues from TV and social media?  Do I need to even answer that question?  If women were more independent-minded, they wouldn’t need to wait for a hashtag to proliferate in order to bring their stories to the public.

Secondly, whatever Moore was up to in his thirties has no bearing on how he’ll vote in the Senate.  We need to fight Cultural Marxism on all fronts with the same ruthlessness that the left fights us.

Unfortunately, Moore, a former state Supreme Court Judge in Alabama, appears to fit the archetype for the holy-roller who covertly leads a degenerate lifestyle.  This is the most cherished cliché in the leftist repertoire: Anyone who purports to have standards and values can only be a loathsome hypocrite.  Certainly we see that cliché depicted in Hollywood films.

Anyone with old-fashioned morals such as those which Moore at least purports to have is a threat to the amoral chaos which the left finds agreeable. This is why the neocons are relishing Moore’s scandals so thoroughly.

The women accusing Moore at least seem sincere and have credible stories with damning details.  One was a fourteen-year-old girl and Moore was 32 when the sexual encounter allegedly took place.

But let’s not be naïve: Some people are really good liars.

If this were really about morality, bring the charges against Moore during the primary; then we’ll be open to your moral outrage.  But as it stands, the timing of these charges are cynical in the extreme.  We have to be equally cynical, therefore, in supporting Moore.