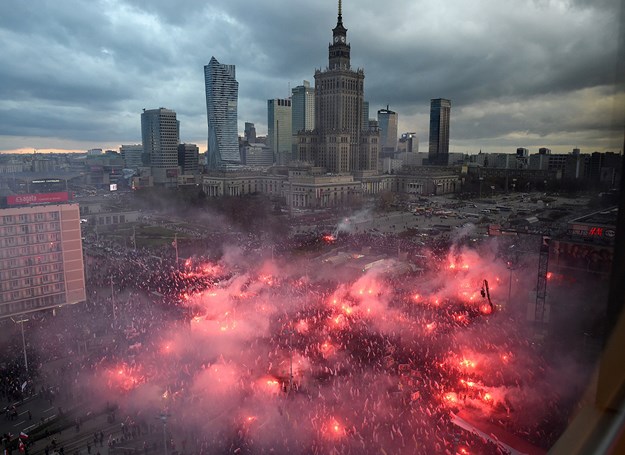 The Warsaw march was absolutely massive.

The All-Polish Youth organization invited young nationalist groups from all over to come to Warsaw over the weekend. But they weren’t the only ones inviting nationalists over to Poland for the weekend. There were a lot of foreigners, especially Hungarians that came for the march.

It was something else. You march along and flash bangs explode all around you with deafening echoes. Some Polish guy is driving in an open bed truck hooked up to a massive sound system screaming tough-sounding Polish nationalist stuff about a block ahead of you. The flashbangs and the guttural Polish pump-up speech set the scene quite well.

It’s overcast, as it almost always is in Eastern Europe. But then you start hearing the snaps and crackles of the flares sparking to life. You’re bathed in a powerful red light that flickers out from time to time only to be replaced by two more.

The white soot from the flares falls over you from all directions like snowflakes and you brush it off your coat. Everywhere smells like chemicals.

And you just march the whole length of the city until its time to peel off, get food and start drinking with friends.

So who was in the march?

There were a lot of regular nationalistic Polish people there, but there was also a huge presence from the Neo-Nazi element and an assortment of 80s-style black-wearing hardcore nationalists. It was hard to keep track and understand what all the nationalist groups were.

It should be said that there were a lot of regular Poles that were marching to celebrate independence and Polish pride, without the whole Neo-Nazi thing. In fact, I saw several confrontations and shouting matches between Poles who were using the day to celebrate Polish resistance to the Germans and far-right groups that were using German imagery as far-right groups often seem to do.

But both groups would be labeled as “Nazis” in the West, as I am sure you well know. And all of them seem to have tense relations with one another like they are almost all on the verge of throwing down right then and there.

The reason for this is simple – even the “anti-Nazi” Polish Partisan supporters hate Jews and Muslims. In fact, every single group there probably felt the same way. It’s varying shades of nationalism from your basic pro-Catholic anti-Muslim sentiment to straight up NatSoc ideology.

But this march can’t really be understood just from the perspective of ideology.

There were legions of soccer hooligans in the streets as well. They would put on ski masks all of a sudden and rush somebody all at once- probably from another soccer club.

These guys didn’t really care much about far-right politics, even if they would invariably be labeled “Neo-Nazi” in the West as well. But hoodlums are simply still a big thing in Poland. And that’s probably why Poles don’t bring their kids to these marches.

There are a lot of elements that are…rough around the edges and generally unsavory that show up to these sorts of things, its true.

But its impossible to use the standards of your typical Western journalist soyboy and have any real insight into the situation.

These are the same people that unironically think Trump is a Fascist. 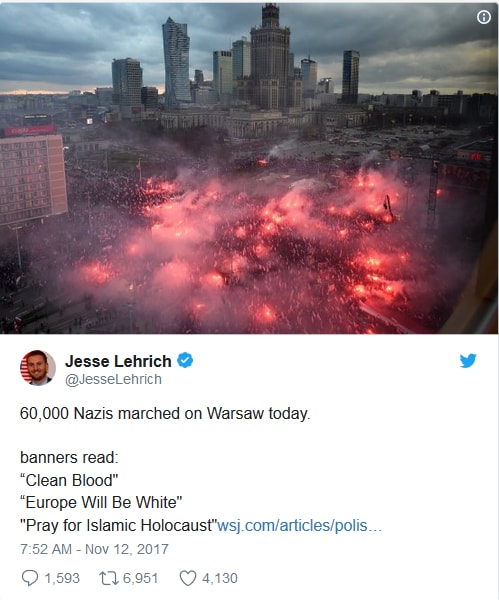 I didn’t actually see those banners. And those aren’t really Nazi ™ ideas.

But I feel like I haven’t really conveyed the bizarre experience that was this march. There were literally tens of thousands of patriotic nationalists marching in the streets of the capital city, and the police did nothing to impede or stop them. There were no deranged lefties shouting or throwing piss or just shlubbing around looking diseased and demented.

It was a strange feeling not being in the minority, but being surrounded by roughly like-minded folks, and being in the position of strength. Surreal actually.

And I don’t think the American journalists making a big deal about it really care about Poland.

What they saw was masses of White people and nationalists marching like an army through Warsaw and they felt a pit forming in their stomach as they thought about what would happen if this came home to them.

It was a powerful display of force, to say the least.

And I would be scared if I were them too because it’s only a matter of “when” not “if” at this point before the rising wave of nationalism crests in the United States as well.