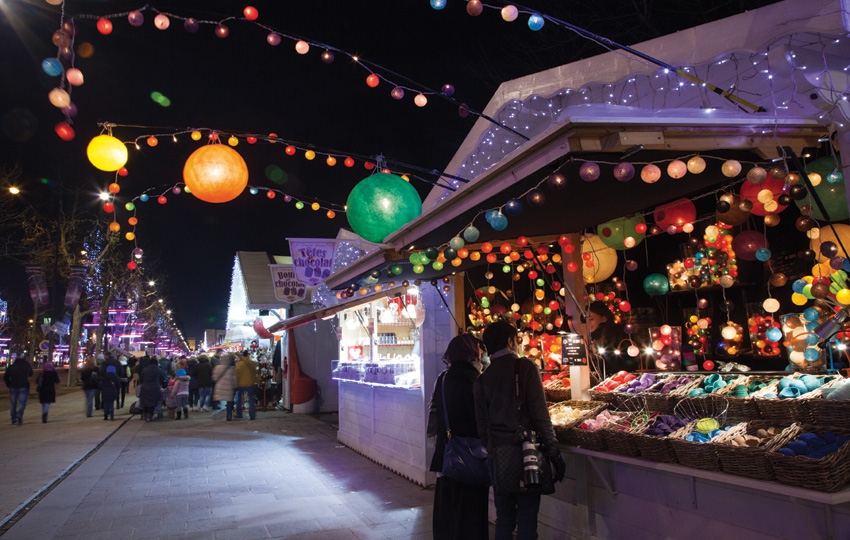 Paris prepares for the holidays in its special way.

Street blockades have begun after a city council decision to cancel the annual Christmas market and fair along Paris’s most famous boulevard, the Champs-Élysées.

The blockades are organized by several dozen angry stallholders who are in despair due to the prospect of losing of a chunk of their annual earnings.

According to The Telegraph, the founder and main organizer of the market, Marcel Campion “objects to a city council decision to cancel the event on the grounds that it sells inferior quality food, toys and trinkets at inflated prices that damage the city’s image.”

Campion threatened strikes would begin on Monday if the market’s cancellation was not overturned, and today traffic jams engulfed many roads leading into the city as trucks and vans were told to deliberately move forward as slowly as possible.

To be clear, Paris does not intend to ban the Christmas market entirely, but to replace it with “alternative ways to animate the famed avenue during the end of the year celebrations.”

The city council’s decision stated that they wish to create “more attractive and innovative events that will enhance the Champs-Élysées in a cultural and aesthetic dimension in keeping with this exceptional site.”

Paris, to be fair, is certainly stuffed with shoddy souvenir stands in every tourist site, and one can feel their passion for the city diminish after passing by thousands of mass-produced refrigerator magnets and Eiffel tower miniatures while taking care not to be targeted by packs of roving African beggars and scammers who shout “Are you racist?” if you try to ignore them. In this regard, I support the city’s plans to clean out the crap and create a more festive and high-quality spectacle like the vastly superior Christmas markets in Eastern Europe. It remains to be seen whether Paris will actually come through with its intentions and ring in an authentic and safe holiday atmosphere instead of  — what I’m guessing — a sterile show of abstract lights devoid of “offensive” Christian symbols. Considering the current trends of removing crosses and demolishing ancient churches across the country, I have little hope of a Christmas revival.

I also find it amusing how the city council is so concerned about sub-standard commodities and overpriced crepes “damaging the city’s image,” while migrants are assaulting tourists in broad daylight, and trash fills the streets. The security situation is so dire that just yesterday the Chinese Embassy urged Parisian authorities to work harder to protect their citizens after a group of 40 Chinese tourists were violently robbed and sprayed with tear gas on November 2nd in the parking lot of their hotel. Foreign Ministry Spokesperson Hua Chunying warned prospective travelers to France that “the situation of social security is grave in Paris and the Greater Paris Region has witnessed a series of violent robberies targeted at Chinese tourists and the overseas Chinese people in France.”

Welcome to the new and improved City of Lights and Love, where Christmas markets are banned for being tacky rip-offs, but vicious beggars and armed robbers await tourists with tear gas and switchblades. Isn’t that what a progressive Christmas is about, fellow white people? Opening our hearts and borders to violent third-world criminals?

On a serious note, Central and Eastern Europe are the only places to go for a genuine diversity-free Christmas experience. I had the opportunity to see Budapest’s Christmas market transform and flourish with each passing year. Each year, it grew larger and expanded to other, renewed pedestrian streets. Last year, it fully reached St. Stephen’s Basilica, the façade of which displayed a light show. A skating rink was built around a massive Transylvanian pine, Hungarian musicians and folk dancers performed on a stage, and a 200-meter food terrace on Vörösmarty Square offered only the highest quality sausages, stews, and mulled wines. The available toys, crafts, and sweets were approved by a government-appointed team of professionals, and the prices were not too steep for tourists.

I remember when St. Stephen’s Basilica was dark in 2009. When there were no cafés and trendy bars around it, no large groups of tourists, just a few lone travelers quietly strolling by. Now, Budapest is regaining its position as a center of European culture and pride, and you can really sense it.

Hungary is Europe’s fastest growing tourist destination, with a 19% increase in the number of tourists in 2015, and a further 7% in 2016. There was a time when the East idolized the West for its quality of life and innovations. In some ways, it still does. But when it comes to European culture, it’s not the East that’s looking towards the West, but a beleaguered West seeking inspiration from the East.

TopicsBudapestChristmasFrancehungarymigrantsParis
Share on FacebookShare on TwitterShare on RedditShare on VKontakte