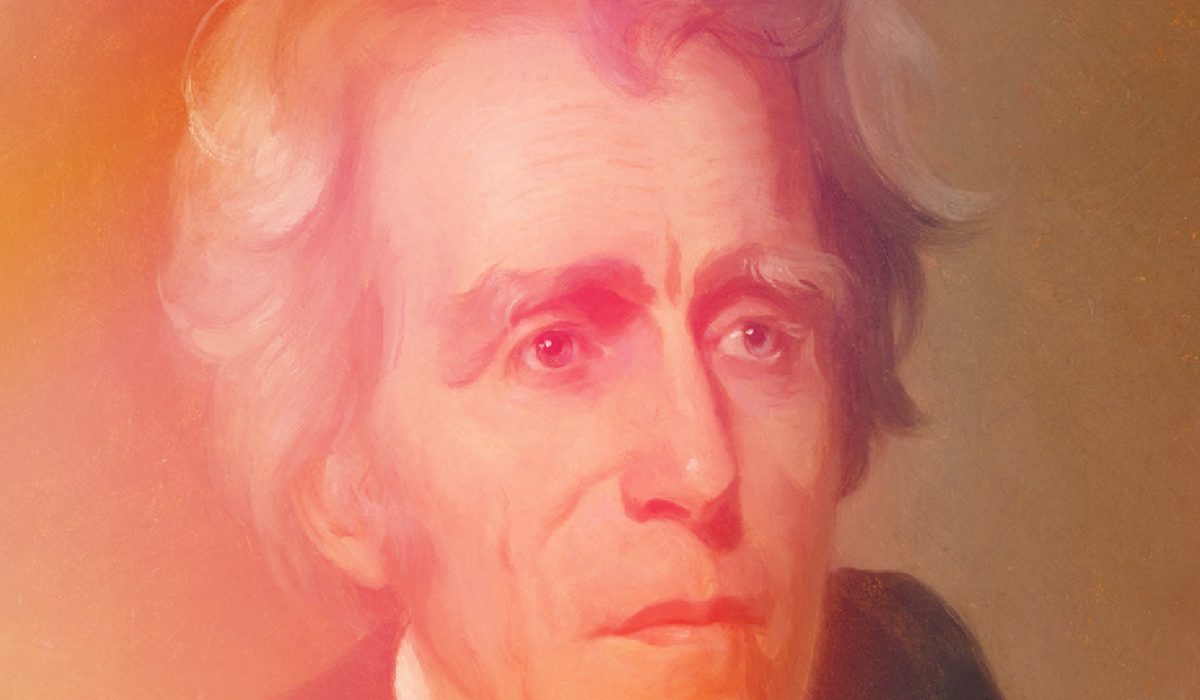 “Badass” is a word that has been all but destroyed by the media, used to refer to fat feminists or limp wristed cucks who play tough guys on TV. In its true meaning, it refers to a man like Andrew Jackson, a leader comfortable with violence, jealous of his honor, and fiercely proud of his country.

Jackson personifies something essential in the American character, especially the Scotch-Irish core that served as the American vanguard, and that, not coincidentally, is the core of the Trump coalition. The Scotch-Irish ethos is republicanism in its best sense, constituting a healthy distrust of decadent elites and a willingness to personally fight for one’s faith and people.

A year ago, we were raging about how Andrew Jackson would be taken off the $20, as affirmative action was coming to currency. Now, the President of the United State is laying a wreath at Old Hickory’s grave and openly appealing to the Jacksonian legacy.

Of course, he’s not quite going far enough. As this is written, one judge after another is contemptuously tossing aside President Trump’s travel bans on people from certain Muslim countries. The rationale for these judicial diktats is that Trump’s executive orders are actually an attempt to impose a “Muslim ban.” Thus, the statements of Trump and his advisors during the campaign are suddenly more relevant to these judges then the actual text of the executive order.

Obviously, the judges are driven by purely ideological considerations. As the SJW’s in black robes invent one newly invented “right” after another with ever more convoluted Talmudic reasoning, it’s hard not to have contempt for the whole process. Even listening to them appeal to the “law” or to the “Constitution” is obscene.

Forget the politics of it. Who can believe the Constitution shows that the Founding Fathers always intended for homosexual marriage to be imposed on every state by the order of the federal government?

Here, we see the rotten fruit of John Locke and John Rawls, after being dumbed down to serve an affirmative action culture. The state is conceived as a “neutral” arbitrator that assigns bundles of rights to every upright biped on the planet, without regard or to culture, capability, or, at this point, even citizenship.

Never mind that John Locke and John Rawls themselves would not have agreed with it. (Even Rawls, by today’s standards, was practically Pat Buchanan.) Defining the state as a legal framework supposedly “neutral” to considerations of race and culture has now led to a regime that imposes a plethora of special rights, restrictions and codes of behavior depending on what ethnic or sexual category each claimant fits into. Indeed, we are now at the point where even the distinction between citizen and non-citizen, already regarded as “offensive” by the media, is not held to be important by the courts themselves. We are on the brink of the courts discovering an affirmative right to immigrate to the United States by every person on the planet. Somewhere in Valhalla, Carl Schmitt is chortling.

Again, forget the politics or your own views on each issue. The courts magically discovered “rights” to abortion and gay marriage. They declared “diversity” is a “compelling state interest” requiring government discrimination against whites. They threw out Proposition 187, declaring that illegal immigrants had a “right” to welfare from the very government whose laws they violated, and sealing the fate of the once great state of California. They destroyed American schools and mandated integration on reasoning that is now widely admitted to be faulty.

Now, we are told hostile foreigners have a right to come into the country because Trump’s campaign advisers said things that made them feel sad. The attempt by the courts to essentially deny the political and impose a “neutral” regulatory structure has actually made the courts more political than ever.

One dissent in the recent flurry of rulings, that actually (and reluctantly) admits President Trump does have the power to exclude aliens from this country, nonetheless engages in some virtue signaling against him. Perhaps the judge felt this was necessary so the dissent could even be written.

The personal attacks on the distinguished district judge and our colleagues were out of all bounds of civic and persuasive discourse—particularly when they came from the parties. It does no credit to the arguments of the parties to impugn the motives or the competence of the members of this court; ad hominem attacks are not a substitute for effective advocacy. Such personal attacks treat the court as though it were merely a political forum in which bargaining, compromise, and even intimidation are acceptable principles. The courts of law must be more than that, or we are not governed by law at all.

But who can deny that is precisely what the court is? Of course a court is “merely a political forum.”

The courts are transparently political institutions. Each presidential election, the nation as a whole admits this when each side screams “this is the most important election ever” because “the Supreme Court is at stake.”

The Left has turned justices like Ruth Bader Ginsburg into folk heroes for its side not because she is a great legal mind, or even a mediocre one, but because she is a transparent activist who will rubber stamp whatever ruling serves her agenda. Once there is a progressive majority on the court, we can take for granted it will use “critical legal theory” that will characterize “racist hate speech” (like citing accurate statistics about crime or group differences in intelligence) as no longer protected by the First Amendment. And as it stands now, there are no members of America’s founding stock (WASP’s) on the Court.

The American True Conservative insistence that “the Constitution” has some magic power to freeze politics in place and prevent any infringement on what the Founding Fathers would have called our “ancient rights as Englishmen” can no longer be accepted as a claim made in good faith. When we hear someone saying it, it’s like hearing Evan McMullin ramble on that restricting immigration is “white nationalism” or “not our values.” It’s a transparent attempt to exploit nostalgia to get Boomercucks and hopeless rubes to work against their own interest. It is impossible the Beltway Right hacks making these “arguments” don’t know exactly what they are doing.

The courts are not a check on power – they are a vehicle by that power can be exercised. The law is always a tool of power, indeed, the essential tool of power. The only thing that will stop power is an opposing power – and what we call “liberty” is simply that space that exists within contending powers.

Power, like nature, abhors a vacuum. Liberty can only be guarded by concrete force. And the election of Donald Trump, rather than chastising the Left, is only encouraging the left wing managerial elite to seek even more unlimited control over property, speech, and social behavior.

Obviously, the whole sale abolition of immigration controls is a huge step in this effort. Salon recently opined that Open Borders is the best way to defeat Donald Trump. Salon is not wrong.

For that reason, it is time for President Trump to truly channel his inner Andrew Jackson. The courts have made their rulings – let them enforce it.

There are two ways to throw down the gauntlet. Originally, under the founding vision, the judiciary branch was supposed to be the weakest branch of government. Now, it seems like it is the only one that matters. President Trump can take action against this by using the bully pulpit (now enabled by his promised biweekly rallies) to push Congress to strip courts of jurisdiction over immigration issues.

If we want to play legal games with the Constitution, consider Article III, Section 2, Clause 2 of the magic parchment:

In all the other Cases before mentioned, the supreme Court shall have appellate Jurisdiction, both as to Law and Fact, with such Exceptions, and under such Regulations as the Congress shall make.

The right to determine who can and cannot enter a country is fundamental to sovereignty. As the Supreme Court will soon have a (nominal) conservative majority, Trump has to push Congress to act now and restore control over this most critical of issues. This is the approach urged by some of the less destructive “true conservatives” such as Daniel Horowitz at Conservative Review.

The second approach would be bolder and doesn’t necessarily preclude doing the former tactic. As he did at his rally in Nashville, President Trump should simply read the laws that give him the obvious power to regulate immigration issues. He should order the executive branch to enforce all existing immigration laws as strictly as possible. He should end the DACA amnesty. And he should simply order the executive branch to stop processing visas from these countries. Force a constitutional crisis – let the judiciary try to stop him.

Ultimately, such a crisis would go to the Supreme Court, where President Trump would likely win anyway. But the deeper purpose is to delegitimize the judiciary in the public eye, much as the “Dishonest Media” or “Lying Press” has been delegitimized.

And this isn’t part of some dire scheme to hollow out American institutions – it’s to expose the hollowing out that has already taken place. Such a battle is necessary and essentially if leftist activists masquerading as judges aren’t just going to throw out everything President Trump does anyway.

Leftists are already screaming for President Trump’s impeachment. Were Democrats in the majority, it is unquestionable such an action would have taken place. Impeachment is not about checking illegality or wrongdoing – it’s a political act, much like a “vote of no confidence” in a Prime Minister usually means that a PM has lost political support, no committed some crime. Bill Clinton’s overcoming his impeachment in the 1990’s was a spectacular illustration of this principle. And it is time to view the courts the same way – as merely political institutions, battlegrounds for competing actors seeking power.

As it stands now, the American Left already regards the law and the courts this way. They never accept a verdict until it is the one they want. The American Right, meanwhile, throws up its hands and meekly goes along with defat, professing loyalty to some abstract process rather than its actual constituency. They fight for procedure, rather than fighting for the essence.

What Andrew Jackson said of the Bank of the United States must now be applied to the courts:

You are a den of vipers and thieves. I have determined to rout you out, and by the Eternal, I will rout you out!