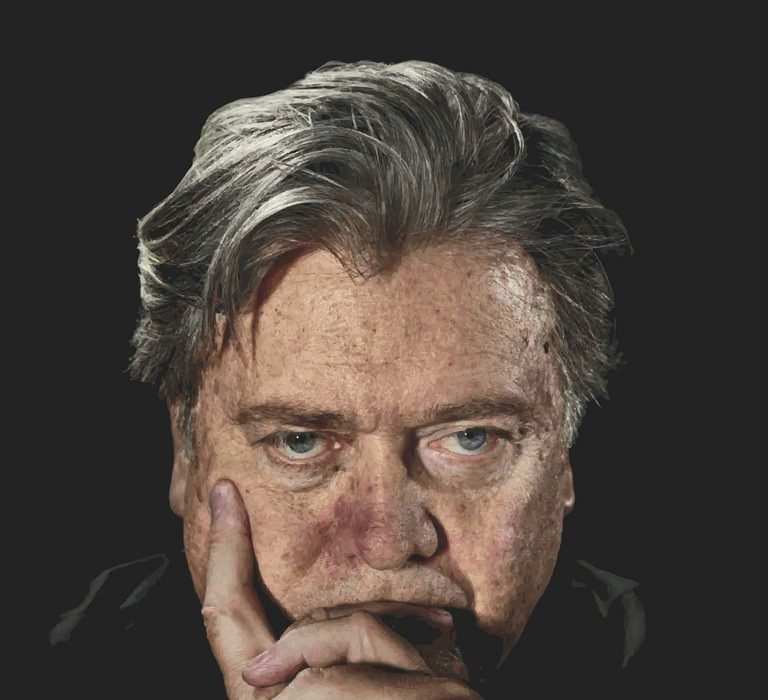 Whether or not Steve Bannon is ideologically “pure,” the man has good instincts.

There seems to be some ambiguity as to where we stand in regards to Steven Bannon.  The media laughably conflates us with him; but just because they are wrong does not mean there is no affinity whatsoever.  Within the spectrum of opinion of Bannon on the Alt-Right, I am on the sympathetic end.  Then again, I have a soft spot for interesting people.

On the positive side, Bannon is a visionary of sorts, who has had a multitude of experience, and is likely sympathetic to our ideas.  He doesn’t care about Austrian economics, and instead extolls populism.  On the negative side, he has some regrettable boomer tendencies, and has engaged in some dubious political activity, such as cheerleading for Sarah Palin and disavowing White advocacy.  A lack of public support notwithstanding; he denounces “White nationalism”; but honestly, we cannot judge him on his response to a binary question to which he has only one feasible response.

Plus, he loathes Megyn Kelly.  And that’s an important quality for a thought leader.

Recall Megyn’s bitchy questioning of Trump at the Republican primary debate in Cleveland on August 6, 2015:

You’ve called women you don’t like ‘fat pigs,’ ‘dogs,’ ‘slobs,’ and ‘disgusting animals.  Does that sound to you like the temperament of a man we should elect as president?

This Trump parried with his famous, “Only Rossie O’Donnell” quip; political oratory on par with “Ask not with what your country can do for you.”

But this just increased Kelly’s bitchiness:

No, it wasn’t.  You Twitter account—[audience still applauding Trump]—Your Twitter account has several disparaging comments about women’s looks. You once told a contestant on Celebrity Apprentice it would be a pretty picture to see her on her knees.  Does that sound to you like the temperament of a man we should elect as president?  And how will you answer the charge from Hillary Clinton, who is likely to be the Democratic nominee, that you are part of the war on women?

At this time Fox News was sniping at Trump persistently, on multiple shows.  It was an eye-opening moment for those on the precipice of Alt-Right sentiments, that the purportedly “conservative” news network in a sea of Cultural Marxism was also against us. (Fox has since straightened out their act, at the risk of losing their entire audience.)

According to Devil’s Bargain, by Joshua Green, Bannon had anticipated that Kelly would be gunning for Trump during the debate; and sure enough, she was indeed bleeding from her wherever: “[Bannon] was certain she was out to get [Trump]” (168).

It should have been no surprise that viewers preferred Trump over Kelly, and they let their dissatisfaction with her be known to the Fox.  This caused Roger Ailes to panic.  Meanwhile, Bannon was in full attack mode at Breitbart against Kelly.  You probably remember, wistfully, Breitbart’s methodical bludgeoning of Trump foes during the campaign.

What is most striking, though, is Bannon’s power to predict the course of events.  He demonstrates this vis-à-vis the Megyn Kelly situation.

One of Ailes’ emissaries visited Bannon, and implored him:

You’ve gotta stop these attacks on Megyn.  She’s the star.  And if you don’t stop, there are going to be consequences.

She’s pure evil.  And she will turn on [Ailes] one day.  We’re going full-bore.  We’re not going to stop.  I’m gunna unchain the dogs.  I want you to go back to New York and quote me to Roger:  Go fuck yourself.

Fast-forward a little more than a year, and Bannon’s “She will turn on him one day” materializes as Kelly, who had looked to Ailes as her protector during her conflict with Trump, would in turn accuse Ailes of sexual harassment, the coup de grace in Ailes’ tenure as CEO of Fox News.

With this revealing anecdote, we see that Bannon has a certain prescience that one must respect, and we also get to relive an amusing moment of drama during the enjoyable 2016 campaign of the “glorious leader.”  Finally, the Schadenfreude from Kelly’s downfall just doesn’t get old!