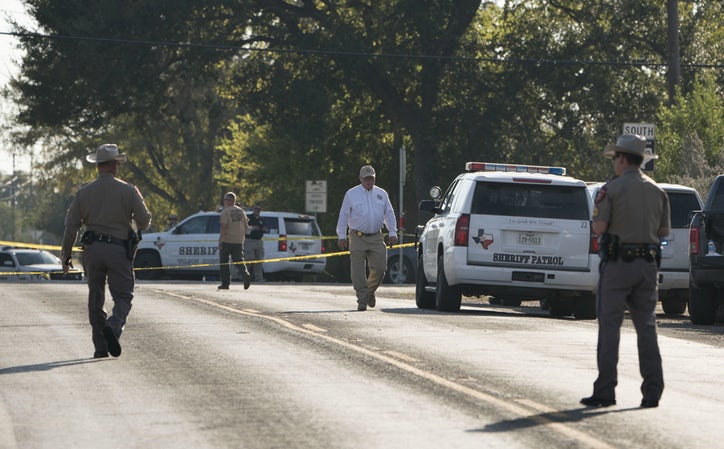 Another anti-social leftist who hates God.

Information from former classmates and acquaintances is pouring in about Devin Patrick Kelley, the 26-year-old who opened fire inside a rural Texas church, killing 26 churchgoers and injuring 24.

Kelley was apprehended outside the church by 55-year-old Stephen Willeford. According to a local account given to Daily Mail:

Willeford was first alerted to the shooting when his daughter called him saying there was a man in body armor gunning down churchgoers. He grabbed his gun and bravely headed down to confront the killer. The local said that while Willeford has no military experience, he is an excellent shot, and when he came face-to-face with Kelley, he didn’t hesitate; he shot in between Kelley’s body armor, hitting him in his side. The 26-year-old had dropped his Ruger assault rifle and climbed in an SUV to flee the scene.

But another local resident, Johnnie Langendorff, who had witnessed the confrontation refused to let the shooter get away. Both he and Willeford, a local plumber, jumped in his truck and gave chase.

Langendorff told KSAT 12 that he’d been speeding at 95mph, while on the phone to dispatch, while Willeford kept his rifle trained on the gunman’s car. As they approached a sharp curve in the road, near the 307 and 539, he said Kelley appeared to lose control and his car swerved off the road.

Aside from suffering from obvious mental issues, it’s unclear what made Devin Kelley finally snap and target Sutherland Springs, an unassuming town with only 400 residents about 35 miles north of his hometown of New Braunfels, Texas.

About Kelley, a former high school classmate stated: “He had a kid or two, fairly normal, but kinda quiet and lately seemed depressed.” Others testified that they’d deleted him off Facebook due to his anti-social ramblings and off-putting, incessant preaching of atheism. Another former classmate wrote: “There were people I knew who stayed away from this guy for many reasons, which all make sense to me now. He just requested me on Facebook recently.”

Meanwhile, the killer’s neighbor told ABC news that Kelley lived in his parents’ house with his wife and small child, and that sometimes gunshots could be heard coming from near the house late at night.

And to top it off, The Telegraph reported that Kelley was dishonorably discharged from the US Air Force for domestic abuse. Ann Stefanek, an Air Force spokeswoman said: “He served 12 months’ confinement after a 2012 court-martial and ultimately received a bad conduct discharge and reduction in rank.”

This is a recurring tragedy in the United States that has been going on for decades, and it has little to do with the occasional Islamic terrorist spicing things up. As President Trump stated at a press conference in response to the shooting: “This isn’t a guns situation. This is a mental health problem at the highest level.” He described the shooter Devin Kelley as “a very deranged individual.”

And essentially Trump is correct. Mental health problems have been on the rise in the United States, with them accounting for the greatest cause of disability and currently affecting 20% of the youth population. Despite only a fraction of mentally-ill people committing murders and shootings, the unpredictable damage they can cause to communities cannot be ignored.

The bottom line of this situation is whether there is a solid way to prevent maniacs like Devin Kelley from hoarding weapons in the United States while maintaining the gun-carrying freedoms of the rest of the population. The causes of increasing mental illness in the West also must be addressed. Obviously, there are many good ideas we could supply from an Alt-Right, or even just a common-sense, perspective.

Everyone in our generation has felt it at some point — that vague sense that it’s becoming more difficult to achieve a contented life and reach maturity. To find real, lasting meaning and battle the specters of cowardice and nihilism which relentlessly haunt modern existence.

Mainstream culture is one which promotes spiritual death, in ways too numerous to detail. The ideal is a barren life centered on momentary, carnal pleasures and the self. A legion of debt-slaves toiling away, cursing God for their misery. “We were supposed to be special,” they cry, “with ‘human rights’ of every kind!”

There was a reason Devin Kelley targeted a small church in the middle of nowhere. In his twisted, weak mind, something about God deeply offended him. Perhaps the aforementioned thoughts crossed his mind, but whatever the case, he chose to become a permanent outcast. He chose to give up goodness and represent the worst depravity imaginable.

Topicschristianitymass shootingTexas
Share on FacebookShare on TwitterShare on RedditShare on VKontakte