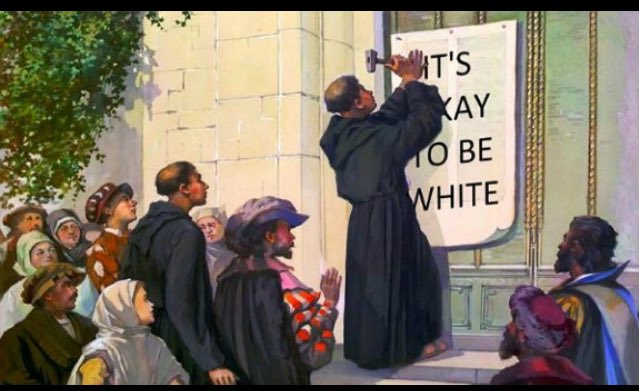 It’s Ok To Be White

The good folks over on 4chan have launched their latest IRL trolling operation. 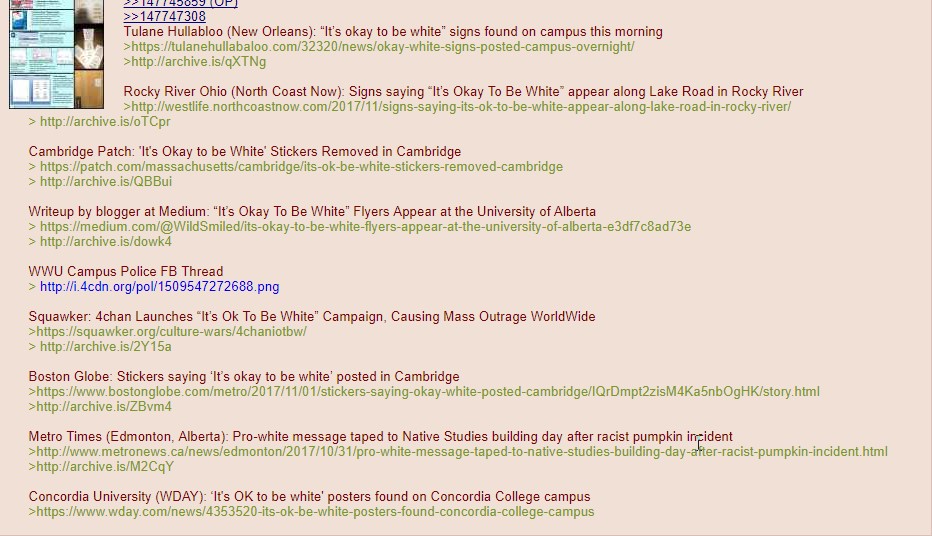 …all around their campuses and in the process have triggered a massive shit-lib overreaction.

Genius in its simplicity, the “It’s OK to Be White” campaign has already attracted the attention of people like Tucker Carlson.

Meanwhile, local news is freaking out.

Check out the precious Hominus Universitus start lisping about how it’s not OK to be White during the interview.

And the campaign is still going strong.

But let’s step back and consider what this IRL trolling operation has shown us.

In my humble opinion, /pol/ has just started to flex its muscles. They’ve already been key in the Meme Wars of 2015-2016, but this is a good harbinger of what is to come.

For more than a decade, /pol/ and 4chan, in general, has served as a repository of angst among young men of my generation in the West.

They’ve been griping and trapped in a nihilistic spiral for a long time. But I see a different tone now. A sense of strength and optimism about what they can do.

Many users honestly feel that nothing is beyond their reach now.

And this is a good vibe. I believe it is directly correlated to the success of IRL White activism all over the West, but most notably in America. More and more young men have had enough of griping and wallowing in self-hate. They understand the causes of it now. They know who is to blame, and now they have a plan.

Over here on the Alt-Right, we are joined at the hip to online imageboard culture, whether we know it or not.

But there are many have been frustrated by /pol/’s stalwart refusal to do much but troll over the years. There is a sentiment among many Alt-Right types that the people who “do something” are worth more than the legions of millennials and Gen Xers on places like /pol/.

But this is an ass-backward understanding of the basic zeitgeist of our era.

You can’t expect disenfranchised, demoralized and damaged kids to suddenly enlist in your legion to fight the POZ and the Anti-White establishment.

/pol/ is not an activist group, it is simply therapy by other means. There you are exposed to brutal honesty, endless abuse and constant venting by those who are already red-pilled bullyciding the rest into accepting harsh reality. People are brought up to the speed…and there is wicked whiplash.

Yet, these young men remain our greatest source of recruits and energy.

And remember that for every one poster, there are 10 lurking, not uttering a peep, but chuckling under their breath and absorbing it all.

Many haven’t felt the fire in their gut urging them to go out and do something about it yet. As has been noted before, many are NEETs, many are anti-social, many need to work on themselves first.

But when you’re out there, marching with a couple hundred old 80’s era activists, with not a young face in sight, you’re doing something wrong.

This is about a cardinal failure to tap into the potential that is waiting online. And no amount of intellectual and rhetorical sophistry will take away from the reality of the situation of the White world in the 21st century.

You don’t have hardened, unemployed factory workers milling around in the streets. You don’t have hungry “proletariat”. You don’t have WWI vets forming paramilitaries. All you have is a legion of sexless, jobless, over-educated NEETs begging for a purpose and a calling in life. Begging for you to reach out to them somehow, speak their language, understand where they’re coming from.

Begging for a uniform and an organization to join.

Some people get it though. Many have come to understand the reality of the situation. Guerrilla activism works.

They don’t play-act that they are in 1930’s Germany. While those that do, think they know better and think they can take the energy of the Alt-Right and run with it into a dead-end. And they will call you a cuck for objecting to their bullshit.

We must not let ourselves be led by these people. These people DON’T understand online culture, don’t understand OUR BASE, and simply haven’t done their homework. To them, I suggest lurking more.

The “It’s OK to be White” campaign is IRL activism done right. And it was done by de-centralized little cells running around, with no leadership, and most importantly, no tangible benefit to themselves. This is what you can get these people to do, just for the lulz.

This is what groups like Identity Evropa and Generation Identitaire have pioneered. And this is what #theresistance looks like.