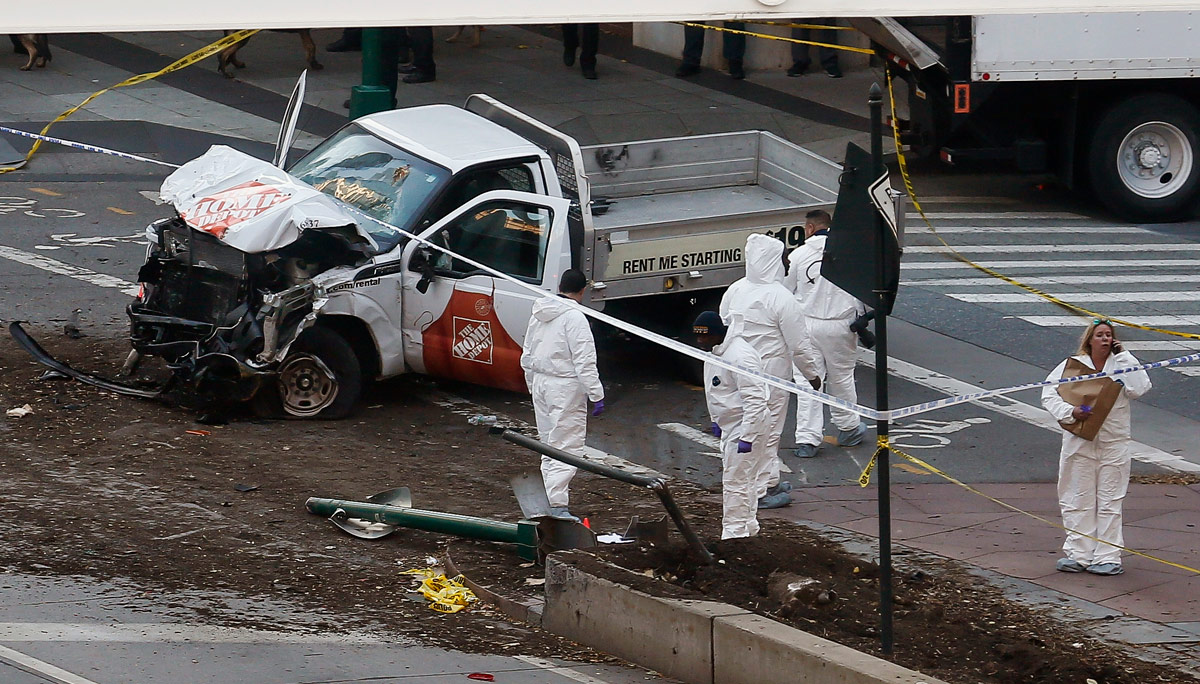 Tragedies are cheap when diversity is near.

Police have critically shot a man from Uzbekistan who killed eight people and injured a further eleven after driving a Home Depot truck onto a crowded pedestrian and bike path in lower Manhattan.

The truck eventually crashed into a school bus, after which the terror suspect climbed out and started running around, screaming “Allahu Akbar” while waving a pellet gun in one hand and a paintball gun in the other. He was shot in the stomach by police, but did not die.

Sayfullo Saipov, 29, entered the United States in 2010 under the Diversity Visa Lottery, a program which aims to “diversify the immigrant population of the United States” by offering 50,000 visas a year to random individuals from nations that have had comparably lower rates of migration. The program has been targeted for elimination by the Trump administration, and has been a source of controversy since its inception in 1990 due to the national security risks it poses.

Breitbart News reported well on the Diversity Visa Lottery’s problems, including a 2011 Congressional testimony from Janice Kephart, the National Security Policy Director for the Center for Immigration Studies:

The Diversity Visa (DV) Program is an unfortunate blind spot in our immigration system that has outlived whatever purpose it might have had. The applicants for these 50,000 “visa lottery” immigration slots require few skills. Neither their qualifications nor identity can be properly vetted. The program does not know, really, who these applicants are or their true purpose in coming to the United States. The program is a national security vulnerability, and has been used by terrorists and organized criminals to not only enter the United States, but to bring others in as well.

Looking closely at the worldwide distribution of visa lottery winners from the most recent compilation of statistics by the State Department, almost the entire world is represented in the nearly 50,000 visas issued in 2010 (citizens of all but the top source countries of immigration may participate). What is perhaps most troublesome is that the low threshold of requirements to obtain a diversity visa and the wide breadth of foreign nations eligible for DVs means that foreign nationals from state sponsors of terror, states with terrorists operating within their borders that threaten U.S. national security, and struggling third-world nations whose citizenry include economic migrants with few skills and no means to support themselves upon arrival all are issued visas annually through the program.

The Diversity Visa Lottery hardly holds its applicants to any standards. To apply, an immigrant needs either the equivalent of a high school education or two years of work experience within the past five years in a job that requires training. According to Ms. Kephart’s testimony, it is very easy to falsify one’s education or work experience, even one’s identity, especially if coming from a third world country. Basically, this all boils down to the United States having a program which every year allows 50,000 completely random, uneducated, borderline useless migrants from all over the world, including from known hotbeds of terrorism, to live in the country and have access to welfare.

The terrorist Sayfullo Saipov lived in Paterson, New Jersey, after spending time floating between Ohio and Florida, searching for jobs and trying to learn English. He drove trucks, then eased into a job as an Uber driver. Despite him shouting “Allahu Akbar” on the streets before police shooting him and leaving behind an ISIS flag and notes pledging his loyalty to the Islamic State, thousands of liberals on social media are insisting that concerned citizens not succumb to “islamophobia”. So in order to keep the Muslims and their appeasers happy, Mr. Saipov’s motives remain unclear. Let’s just say he was a random crazy person and there’s no way in the world he could have been stopped. Unless the solution is the liberals’ favorite: gun control. And perhaps continuing the fight against “white supremacy” which could have caused the terrorist to feel oppressed and thus lash out.

All the usual arguments and platitudes from the Left resurface after every attack, and this morning reading through Twitter felt like living in the Twilight Zone. Immigration must continue, guns must be confiscated, don’t forget about sexual assault, Muslims are sad, and everything is Trump’s fault.

Terrorism is a simply a side effect of multiculturalism. Multiculturalism creates low-trust, splintered societies which need to be harshly controlled and censored by the government. In more homogeneous nations, people rely less on the police and more on themselves to sort out problems. Violent, aggressive crimes are a rarity. Terrorism doesn’t exist. Either we acknowledge this fact, work towards drastically cutting immigration to the beleaguered West and introducing stricter welfare policies based upon one’s ability to integrate, for example, or we get used to this cycle of death until it transforms into a sort of blood sacrifice that’s needed to keep the plans of a fully globalized multicultural world pushing forward.

TopicsIslamNew Yorkterrorism
Share on FacebookShare on TwitterShare on RedditShare on VKontakte