There Is A Massive Horde Of Africans About To Hit Europe

Apparently there is a massive concentration camp of about 500,000 of them in Libya that just got the green light.

Let’s be clear, the flow of migrants into Europe is never-ending. The stream doesn’t ever stop flowing.

…But it does change its tempo from time to time.

During the events of the Mutti Merkel refugee crisis, we saw the dam break and a flood come pouring into Europe. It was truly biblical. And we still don’t know just how many made the trek. It could be somewhere between 2 or 4 million through Germany alone.

But the elites don’t want to boil the frog too fast.

They managed to dam up one of the mass migration points about three months ago. That, coupled with the border fences erected along the route through the Balkans has managed to slow things back down to a drip. Only about 100 thousand more Africans entered Europe this year so far.

But the stop-gap measures won’t hold for long. Arab rebel gangs have rounded up and put about 500 thousand Africans into open air camps and refuse to let them pass on to Europe.

The Russkies did a good job on this report:

100s of 1000s of Africans are being held in what are essentially slave camps under brutal conditions, awaiting shipment to Europe via a network of pro-immigration NGOs and human traffickers. It is an eye-opener.

Kiselev – who is basically the main ‘Murika (and Europe) is bad, mmk?’ propagandist in Russia – spoke about the situation quite frankly:

In any case, it’s clear that the immigration crisis in Europe is far from being resolved. The flow of refugees from the Middle East and Africa isn’t decreasing and is even growing.

During 2016, 180,000 immigrants arrived by ships, and in the first 7 months of this year more than 110,000 people have landed on the European shores. Italy is taking the main blow. And the chief supplier of illegal immigrants from Africa is Libya.

Europe is trying to cynically bribe the militants in Libya, so they would leave the refugees there, even if it’s in a concentration camp.

There’s a full video about it here:

Kiselev is no bleeding heart, so believe me when I tell you what he is basically saying is, “look at those poor refugees, Europe. Reap what you sow for bombing Lybia. We hope you choke on them.”

Not very nice to kick your opponent when they’re down, tbqh Mr. Kiselev…

There are some lulzy parts to this story as well. Apparently, in the camps, they had shit mixed into their food. The reporters seemed to be confused and reported that this was proof of inhumanity or something without taking into account the fact that these people shit in their food and water supply all the time – it’s just part of their culture and way of their life. At least it is for the Bedouins. The more you know.

And of course, the country that you would most expect to step up to the plate, in fact, did.

Yes, the nepotistic and less-concerned with Virtue-sniveling people of Italia decided to do what they do best: bribe their way out of their problems:

In the Hamarat hotel in Tunisia, the Italian secret services gave 5 million Euro to Ahmad Dabbashi, nicknamed “Uncle,” who paid the clans and ordered to close the ports. After Gaddafi’s death, every meter of Libyan coast is controlled by its own gang.

I bet Mutti Merkel must be livid about such backdoor dealings. After all, Ghadafi was killed off BECAUSE he was the only one guarding the gates to Europe. And now the Italians think that they can cut a deal to save Europe for chump change?

Just you wait till Merkel gets her shriveled crone-hands on them.

But wait, there’s a lot more juicy stuff uncovered by the report. Like this Swiss priest who is known as “the Refugee Angel”.

We found Father Zerai, a candidate for Nobel Peace Prize, an angel of refugees, in a suburb of Bern.

Of course, he knows everything about the agreement, and about the calm in the sea. Not only because his number is written on Libyan camp walls, and is dialed from boats instead of SOS, now his phone is silent for the second month.

But now he is regularly called from the prosecutor’s office of Italian Trapani, where a criminal case has been brought against the Eritrean priest. He is suspected of having connections with traffickers. According to the investigation, Father Zerai received calls from Libya and knew exactly where the boats came and where they needed to be picked up. 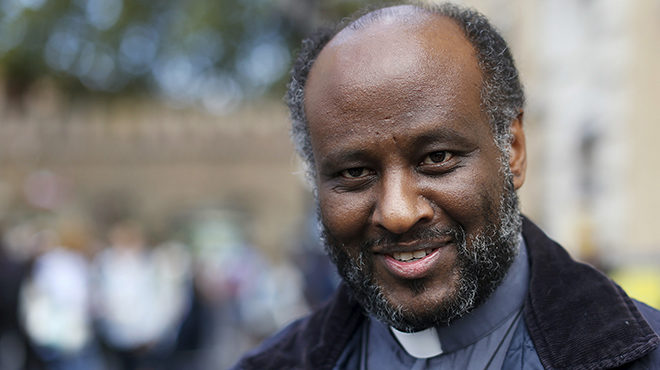 To be honest, I was really expecting him to be 100% lily-white and 100 cucked. I breathed a sigh of relief when I saw his big black beautiful mug staring back at me from the google images search.

But seriously, the Italians basically ended the refugee crisis for 5 million Euros. Let that sink in. Hell, we should raise that money to bribe off some Arab gang ourselves if it’s that easy.

5 million turned out to be a sufficient sum to reduce the flow of migrants by 87%, that is, almost completely.

But alas, it won’t hold for long.

According to unconfirmed reports, the 48th brigade led by Ahmad Dabbashi lost control of the coast.

This means that the investment is lost, and new boats can appear on the horizon very soon. 500,000 people are gathered at the Libyan camps, and are ready to leave.

The gang was snuffed out, probably by some American or Israeli-supported group that will keep the border open. And we are about to see another half a million at least make the journey all at once.

The refugee crisis isn’t over, in fact, it’s just getting started.