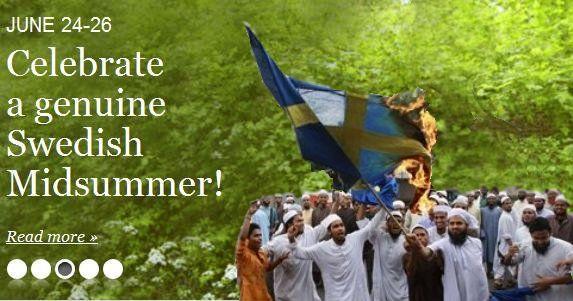 An eyewitness report on how quickly things can change.

I was abroad for 12 years between 2000–2012. During that time, I lived and worked in many European countries and the Caribbean, traveling and attending cooking school in India and backpacking through south-East Asia. I have met and worked with people from all over the world. When my daughter was born (in Basse Terre in Guadeloupe) I decided to go back home to Sweden.

What I saw when I got there shocked me.

The sad state of my homeland was a wake-up call for me. Many who had been there for the slow transformation couldn’t (or wouldn’t) see the differences that I immediately did. Eventually, I started to study and engage in the national movement. Just weeks ago I was elected (on SD platform, the only nationalist party in parliament) to the council of my local church.

The Swedish people and citizens are being discriminated against by their own country in favor of third world migrants.

I want to talk about the Swedes, to explain our people to those who may not know much.

The Swedes are known as a naturally skilled, hard-working people with high morals and loyalty. From an evolutionary view, the Nordic climate has created and forged a population which is able to cope with adversity, plan for the long-term and survive cold winters in darkness.

There is a lot of good to say about the Swedes.

For example, one of the reasons why Swedes lead the world in numbers of pets and laws for animal protection can be traced back to pre-Christian times where longhouses were separated but shared between the people and their animals during the winter. To protect the source of food and growth, but also to increase the temperature during the cold season the cattle and herds was treated almost like members of the family. Building secure infrastructure and finding ways to get the most out of limited agricultural yields and natural resources during the short summer and fall led to innovation.

But the Swedes are natural collectivists, addicted to consensus within the group, allergic to conflict and often paralyzed by the law. During my twelve years abroad, working in kitchens all over the world, I was employed several times mainly or partly because of my nationality. Many restaurant owners and employers, in general, had good experiences with people from the north. In other words, I wasn’t the first to notice that we are a compliant and docile people.

Sweden’s national pride peaked in the middle of the 70’s when new laws for the universal welfare system were created.

Our country became one of the safest, most optimistic and most prosperous societies in the modern world, offering free education, healthcare, high material standards and a thick safety net for those who might slip through the cracks.

The laws underlying this system — based on the famous words “do your duty, demand your right” — was built on one of the most ethnic and culturally homogenous populations in the world. In the late 1940’s only 1% of the Swedish population was born abroad and only 0.1% born outside Europe. Today, it is not unusual to be the only native Swede in a metro-wagon during the daytime.

The Swedish church and state officially separated in 2000 and since then similar elections are now held in order to elect individuals for the churches on three levels. Local, regional and national. Since the separation, there was a schism and the church has become a left-liberal house of worship.

The nationalist movement, led by SD has decided to try and re-install a traditional church with an emphasis on historical values and historical identity. The church in Sweden has for decades been focusing on political movements as LGBTQ movement, helping along the Islamisation of the country, and taking away financial support from local communities in favor of big, foreign aid-organizations, promoting immigration and hiding illegal immigrants from the authorities.

When the archbishop publicly declared Jesus and Muhammad to be similar prophets and “just different ways to find god,” many people had enough. 1 million Swedes have given up their membership in the past 15 years (which amounts to sixth of the total 6.1 million members).

It was in the last week running up to the elections of the church that an anonymous message was left on the local Sweden Democrats (SD) Facebook page. The council of Nacka (Nacka kommun) has bought three nearby properties for three Syrian families consisting of one man, his three wives, and his sixteen children.

In Sweden, the government has created a law to force local councils to house a certain number of immigrants (Prop. 2015/16:54 ) that was put in place in March of 2016. Since the housing situation in Sweden is already a disaster, the council has no choice —  if they are to adhere to the law — than to out-buy normal Swedish citizens on the open market to make room for the newly arrived overlords. Propaganda normalizing the polygamous family, paid for by the tax-payers, is then distributed to Swedish locals to smooth over any ruffled feathers.

But even that is not enough.

In my beautiful home commune of now just 100,000 inhabitants, the council has been forced by our left-liberal and criminal government to buy housing for third world strangers at the price of over 310 million SEK (just over 38 million dollars). Set aside the fact that the absolute majority of these migrants are already on benefits, building parallel societies and are sickly overrepresented in unemployment, crime, rapes (especially the never-before-heard-of gang rapes). Meanwhile, elderly Swedes, single mothers, and other Swedes simply in need of support are told to seek housing on internet sites and are dumped in dodgy motels to share living space with drug addicts and psychopaths.

I am a social worker myself, so I know. It’s just a fact. The Swedish people and citizens are being discriminated against by their own country in favor of third world migrants.

Sweden has gone from being considered the safest country for women in the world to a complete mess.

In the past forty years, violent crime has increased by 300% and rapes by 1,472%. Sweden is now number two on the list of rape countries, surpassed only by Lesotho in Southern Africa. The morality and ethics of the Swedish authorities prevent them from bringing out statistics with ethnicity connected to crimes since it could offend a certain group. Even descriptions of a suspect for rape released by the police stops with what clothes the person was wearing. I mean, if there are gangs of blonde Swedes in Abba-shirts who are terrorizing the girls of the country we need to know. We need the truth to be able to deal with it. Instead, the media is putting a wet cloth over all of it and focusing on how a Muslim girl feels insecure because she felt someone was looking angrily at her on the bus (after the Stockholm terror attack 7 April 2017) and how we need to be careful about racism growing.

But the problem is not only a criminal and self-hating government.

We know that it has an agenda and that everyone in the government works overtime to diminish our forefathers work, history, degenerate and deny our current existence and destroy a future for our children.

And since the Sweden Democrats have been growing rapidly in the polls, the establishment is now preparing for a psychological war in trying to divide to concur the national movement, smear and publicly tarnish the reputation of anyone who is associated with the party.

We will have to see if this campaign of lies works or whether the Swedes will wake up and take back their country at the polls.