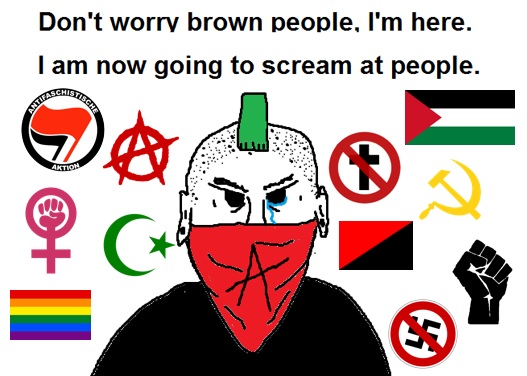 Salon.com's latest contributor has something especially crazy cooked up for our reading pleasure.

Salon.com sure knows how to pick its contributors.

From articles discussing the normalization of pedophilia to daily complaints about the patriarchy, at first I thought Salon must be deliberately scouring mental clinics for prospective authors due to the sheer volume of unsound rantings they produce, but no. Severe emotional disturbances and addictions just run in most people on the Left, which means Salon merely represents your average leftist Millennial’s thoughts and positions. The Tweeted GIF response below accurately depicts the work process of a Salon.com contributor.

I write articles for @Salon

And so, the site’s latest assault upon our sanity is this piece titled My liberal white male rage: what should I do about it? by a paranoid schizophrenic teacher at an all-girls school who fantasizes about saving black people from blonde-haired, blue-eyed men by brutally beating up the latter. This teacher attends “anti-racist/anti-sexist white male groups” where he elaborates upon his hallucinations to other self-loathing cucks.

I’m being provoked by these fucking assholes, these men, and I want to lash out, punch back…

Also, I’m scared. I mean, what if one of them brings a gun? … I saw a civilian carrying an assault rifle in Arizona. Scared the shit out of me. So I feel doubly trapped. I don’t want to do what’s selfishly best for me — beating the shit out of one of these guys [note the assumption that I could] — and I also don’t want to die. So in that way, I also feel like, and it’s the only word that makes sense to me here, a pussy.

Women, I will let you in on a male secret. Men know that constantly self-proclaiming male 'feminists' are often predatory sleaze bags. They are intensely disliked by other men because of their manipulative qualities and not, in general, because they are viewed to be sex traitors.

Social justice warrior seminars and feminist studies brainwash men (some of whom are already disturbed) into confused, self-hating psychopaths who can barely conceal their anger over random small things not going their way. Men should not be like this. Manipulative and brooding, insecure over their imaginary “white privilege,” which keeps them perpetually groveling to minorities and women who will never love nor accept them due to their unnatural and weak dispositions. It’s frankly depressing to me, as it always is when witnessing the result of liberal progressive indoctrination. Also, as a woman, I can guarantee that no female on earth would dare have a long-term relationship or family with men like the author. The unpredictable minds and violent tendencies of male feminists can be sensed a mile away.

The author continues his story by describing a fervent need to feel rushes of power, which he gets through violent fantasies, video games like Tekken 3, and from re-watching battle scenes from Game of Thrones. He writes about a specific incident when he freaked out over difficulties in contacting a locksmith, and describes the feeling of “anger held hostage” as a result of the situation.

I’m a left-wing white guy. And a Jew. Since Charlottesville, I’ve noticed some strange changes in myself. At work, I’ve spaced out for 20 minutes at a time during meetings, daydreaming about committing violence, always righteously.

If that didn’t sound disturbing and in need of police investigation, then take a moment to read the following paragraph, which contains by far the craziest and most hilarious unironic justification for violence against innocent people I’ve ever read.

“I’ve been told that Antifa have physically fended off neo-Nazis who have attempted to enter people’s homes in raids in predominantly black neighborhoods. Unverified; but even if that instance is false, the point is that there can be physical intervention that is the product of strategy or defense or care. The physical compulsions I’m feeling are purely from rage — a hunger for violence and vengeance. You threaten me, I fuck you up.”

This is an extreme example of what you get when an insecure beta male is indoctrinated by anti-racist and/or feminist groups. A paranoid schizophrenic whose unfulfilling, cucked life collides with fantasies (imaginary neo-Nazis raiding the homes of black people who need his rescuing) that evolve into hallucinations of justified domination and violence which he commits in order to gain adoration.

A male feminist is a lowly, failed man who seeks attention and gratification through manipulative means. Since he’s a failed man, he views traditional masculinity as offensive, as an obstacle to his personal success, and so he usually sides with enemies of men: feminists and Antifa, whom he tries to “save” in hopes of being viewed as some kind of rebel hero. See as the author describes his frustrations with regular men:

And I feel confronted: Are most guys out there fucking assholes? Do most guys say faggot and retard and pussy? Am I just living in a little social-justice bubble, and really this violent male way of being is in most places, most of the time? And if so, what is my role in changing that?

Despite attempts at saving poor brown people and punching Nazis, a male feminist will always remain miserable and short of his goal of attaining hero status since his enemies will only ever view him as a useful idiot and a disposable tool. A good example is this classic video of a white male Antifa being bossed around by two females who demand that he do the work. “Punch a Nazi, stop being performative,” shrieks the female, then laughs at the lanky white guy’s complaints muffled by the bandana over his mouth.

In a way, it’s possible to feel sorry for these men, but likely they ended up the way they are for a reason, and with them joining Antifa, the groups become a restless den of parasites feeding off each other. I guess the best way to phrase the situation is that some men were made for glory, while others… not so much.