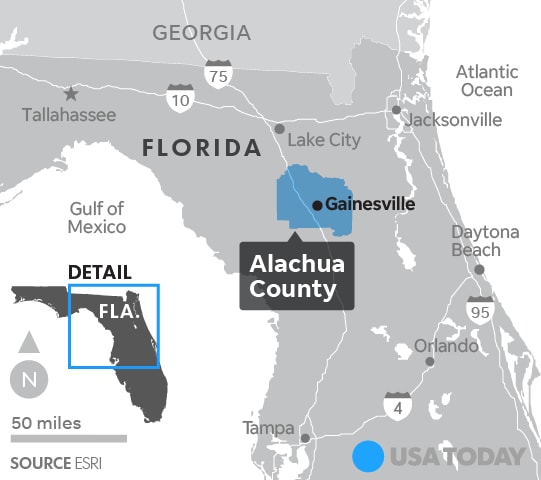 State of emergency has been declared over a simple Alt-Right college speaking event.

Let me give it you straight, people are freaking out over Richard’s upcoming speaking event.

When Hurricane Irma was bearing down on Florida last month, Gov. Rick Scott declared a state of emergency. On Monday, he did the same thing in Alachua County, ahead of a speech by white nationalist Richard Spencer at the University of Florida in Gainesville.

“We live in a country where everyone has the right to voice their opinion, however, we have zero tolerance for violence and public safety is always our number one priority,” Scott said in a statement. “This executive order is an additional step to ensure that the University of Florida and the entire community is prepared so everyone can stay safe.”

“I find that the threat of a potential emergency is imminent,” Scott declared in his executive order, noting that Alachua County Sheriff Sadie Darnell had requested the state’s assistance. The order will make it easier for various agencies to coordinate a security plan for Thursday’s speech at the university.

The University president was really salty that Federal law required him to allow Richard to speak:

But state’s flagship university had to let Spencer speak on campus eventually. As a state entity, the administration explains in an extensive Q&A, “UF must allow the free expression of speech. We cannot prohibit groups or individuals from speaking in our public forums except for limited exceptions, which include safety and security.”

Unable to literally shut it down, he made an impassioned plea for people to cover their ears and avert their eyes.

I don’t know about you, but I think we need to thank Mr. Fuchs for his viral advertising campaign on our behalf. Nothing gets young teenagers into something than when warning label, “dangerous and forbidden” is slapped on it.

Our ideas are so dangerous, they are comparing our speeches to Cat 5 hurricanes. That’s some serious praise right there.

But the officials aren’t the only ones who are freaking out over this.

Check out what this Left-wing vlogger had to say:

Cernovich: @RichardBSpencer is now at the point where I will physically kick his ass if that's what I have to do pic.twitter.com/Luie140cG3

Oh wait, that’s Thernovitch, a prominent figure in the Alt-Lite. Sorry, I got him confused because of all the threats of violence he made towards Alt-Right members.

Oh, here’s another video of him telling young kids not to associate with us because they won’t get laid as a result…

Cernovich: @realJamesAllsup has a trust fund and will likely be killed for being a Natzee. "It's too late" for him. pic.twitter.com/8eUTWIwvel

Many of you might know that Mike used to be a bit of a PUA master back in the day. He seems to have forgotten what Bad Boy allure does for a man. Ah well, guess he was full of shit back then too. Poor form, old boy, poor form. He seems to literally be going mentally insane because Richard is making the news and he isn’t.

And the Alt-Lite seems to be in its death throes. Rebel Media is gone, Gavin is gone, Milo is gone and the gorilla man is all that’s left.

Meanwhile, we are en route to the event.

There’s going to be a lot of protestors there that will start gathering around noon Thursday probably. And the national guard will be there forming a perimeter, as will the local cops and the campus cops. So hopefully, Antifa will have their hands full fighting with them.

There’s going to be a press conference with Mike Enoch, Richard Spencer, and Eli Mosley. There will be about a hundred presstitutes there.

Richard’s speech will explain the basic premise of the Alt-Right. Eli’s speech will shame the White college professors who peddle anti-White garbage and we’ll have to see what Mike will say.

This is shaping up to be a huge event, even though it will be nowhere near as large as what we brought to Charlottesville. Tomorrow might go off without a hitch…or the situation might escalate, so stay tuned.