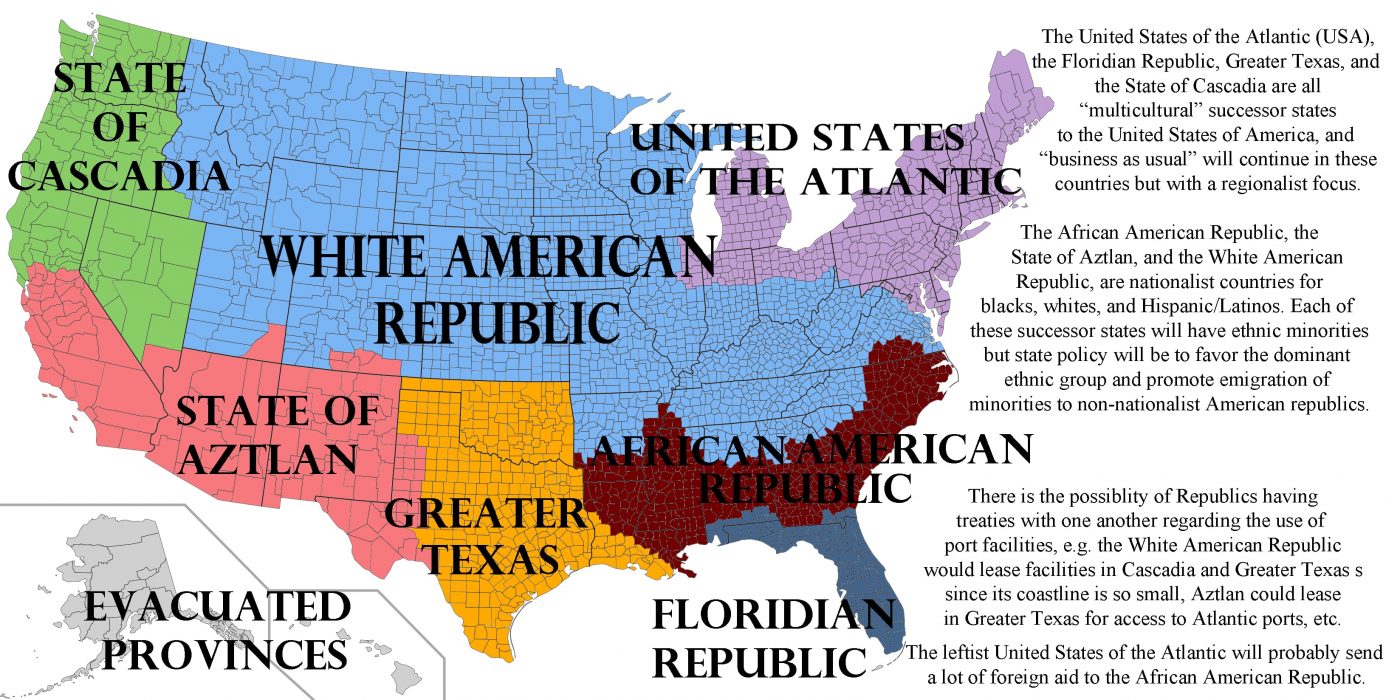 Political Violence Is Inevitable In America

The future looks like it has a lot of Balkanization and political violence in it.

The shooting in Las Vegas is part and parcel now of living in the West. Nowhere in the West is it more evident now than in America that the many racial and ethnic groups are fighting over a carcass. A dead bag of ideas and principles that has been festering since at least 1965.

The many ethnic and racial groups that comprise modern America are scavenging at this carcass in a desperate frenzy to grasp what resources from it that they can and as those resources begin to run out it will lead to confrontation and conflict.

The country is on the edge of a radical conflict that will change the very geopolitical and demographic makeup of the North American continent. The old America of 1965 is dead and it’s time her former peoples go their separate ways to forge a new existence apart from one another.

If the people who formerly used to call themselves Americans continue to fight over this carcass they will spark this aforementioned conflict and blood will be spilled. We see now that African Americans are ‘taking the knee’ to protest a country which they feel has treated them as second-class citizens throughout various points in history.

They have the right to feel this way.

According to PewSocialTrends.org nearly 43% of African Americans don’t believe America will make the changes necessary to give them equality. Meanwhile, affirmative action and massive welfare programs to re-distribute the nation’s wealth have remained in place for over half a century in an attempt to lift up Black America. Still, 66% of Blacks feel that they are treated less fairly when applying for a home loan and 75% are under the impression they are treated unfairly in the criminal justice system, a system which was purposely built to be the least biased in the world. Because of this perception of their situation, they have begun to demand change that not even they themselves believed  White Americans would give them.

They have demanded and received segregated black only forms at: California State University, University of Colorado Boulder. At The University of Chicago, they also demanded segregated housing. Harvard is now holding separate black only graduation ceremonies and blacks are increasingly returning to the South. This does not make up a population unified with the ideas of America. This is a population disillusioned with a nation they never felt they were truly a part of, to begin with.

If the people who formerly used to call themselves Americans continue to fight over the carcass blood will be spilled.

At her conception, America was a White, Anglo-Protestant nation with values reflected in that historic population. White Americans are resoundingly in opposition to the things Black America is currently standing for. 70% of them watch the NFL, 60% intend to watch less of the NFL now that players are disrespecting their dead country. This view on disrespect stems from the massively different political views Whites hold with the non-White population of the country. Nearly 42% of whites think that on-demand abortion in the United States should be outlawed, while 62% of Black Americans support it, and the Hispanic population is split almost 50/50 on the issue according to Pewform.org. Politically they continue to buck the trend of the people of color in the United States.

If only White votes were counted, Trump would have gotten 369 electoral votes to Hillary’s 169 which is a huge departure from the 306 Trump to 232 Clinton which actually occurred as laid out by Brilliant Maps based on the electoral commission data.

White Americans hold different views from all other populations in the United States, and this wide difference in views among races is one of the primary reasons America withered and died. A custodial population who imports more mess and more violence, and persons with opposing views, can never maintain a healthy society.

The alien population of America: some 57,470,287 Hispanics, which constituted roughly 18% of the population in 2017 are yet another major driving force of future conflict.

The Hispanic population in the country highlights almost perfectly the balkanization of the physical geography of the United States. Hispanics do not live where Blacks live and Blacks do not live where Hispanics live. The Southwestern United States has a Hispanic population of over 35% in every state in the region, and less than a 4.8% Black population in the region as a whole. Conversely, the Southern States all have Hispanic populations of less than 10%, with Florida being the only notable exception to this at around 20%. In 2015 Hispanic Americans went from having a 29% negative attitude towards the United States to a sharp 65% in 2017 and 41% are concerned about their place in America. This is a problem that before 1960 hardly existed as their small population of 6.3 million represented only 3.48% of the population, now they occupy a staggering 18% and in the space of just 57 years, their population in raw numbers has increased nine-fold. This is compounded by the rather conservative estimate that they will represent over 30.2% of the population in 2040 or 132.8 million individuals.

These two groups, The Blacks and Hispanics will not treat Whites with kindness and generosity. They took what Whites from all around the planet had contributed to and created and they began to bleed it dry.  After the Las Vegas Massacre, it is obvious to most of us that the path to peaceful reconciliation is gone, if it existed at all before that, and we must be ready for a time when it is not only one man with a gun aiming a concert.

These attacks will continue with the silence of the media and political class effectively sanctioning these kinds of actions as long as they are directed at Whites who vote the wrong way.