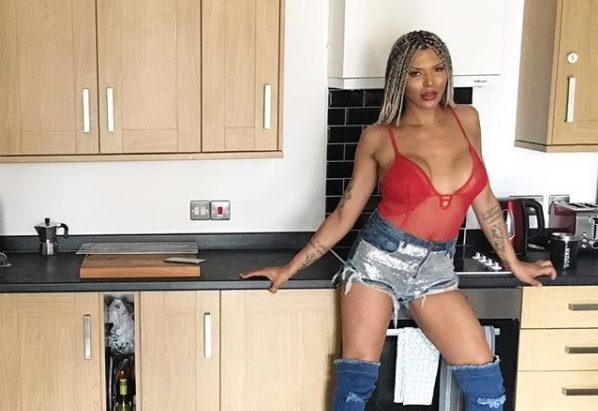 BBC Hires Racist Tranny to Rant Against Whites on TV

"The white race is the most violent and oppressive force of nature on earth."

Remember Munroe (real name: Ian) Bergdorf, the biracial tranny who was fired from L’Oreal’s #allworthit beauty campaign for an insanely racist spiel he made against Whites? Like a recurring villain from an unwanted sequel to an overrated Hollywood movie, he has returned to the public eye with the help of the BBC in order to ramble again about the evils of white people.

“If white people want to see an improvement for people of color, they need to understand that racism is not learned. It’s inherited. And either consciously or unconsciously passed down through privilege.”

Apparently, there’s a gene that makes white people oppress blacks, but there isn’t a gene that tells Munroe Bergdorf what sex he is.

The reason BBC This Week found it necessary to create the above segment as a part of their political TV program is inexplicable to me. Stepping past the video’s distracting, unexpected cuts to different backgrounds and random close-ups of Bergdorf’s foundation-slathered face, the overall message can only be taken as a sign that British culture is healthy and thriving. Right?!

Bergdorf himself has a fascinating passive-aggressive debating style worth mentioning, which I’d like to call “the hair-trigger roundhouse bitch”. In this unique style of communication favored by feminists and SJWs, one treats all questions and offers of discussion as deeply offensive assaults upon one’s feelings. Facts and figures, especially, are insulting, as they are used as weapons to invalidate one’s anecdotal evidence and emotion-based talking points which form 100% of the roundhouse bitch’s intellectual arsenal. Questions and stated facts are never actually responded to, only deflected in these two ways: 1. by whining about one’s imaginary victim status and 2. by complaining about being “misunderstood”. Amid the sympathy-seeking wails, the roundhouse bitch snidely counterattacks with angry, oftentimes unintentionally humorous outbursts and insults that betray the bitch’s true hate-fueled agenda and desire to dominate and crush opposing views. Such a debating style can be clearly observed in the video clip below, from the Victoria Derbyshire program on which Bergdorf made an appearance after L’Oreal fired him in early September.

The conversation basically went like this. For clarity’s sake, sometimes I paraphrased Bergdorf’s responses.

“Do you believe all white people have taken part in racial violence, which is what you wrote?” Derbyshire’s bell-clear question rings out.

“I understand that.” Derbyshire says. “In terms of specifically what you wrote, are you standing by “all white people” and “racial violence”?”

“I understand that. But are you saying all white people are guilty of that?”

“All white people benefit from racism with white privilege. If you are not actually dismantling racism, if you are not going to pull people up from the bottom of the pyramid to the top, then you are participating and benefiting from racism.”

“But you didn’t write that…”

“It was taken out of context … I’m not going to censor myself or my feelings … The problem is white people are thinking about how it makes them feel when racism doesn’t affect them. It affects people of color … White people need to get over that.”

As you can see, Bergdorf faithfully displays each characteristic of the hair-trigger roundhouse bitch, including the crucial final element: threatening no further participation in discussions unless the talks cater specifically to his feelings.

Having to justify my lived experience to three white men, who talked over me, repeating facts and figures. Utterly mindboggling.

I will not participate in future panel talks unless the panel is diverse.

Currently, a campaign over social media has started up, urging people to report Bergdorf for hate speech and send complaints to the BBC. The UK, after all, loves its hate speech laws so much that it’s planning on imprisoning people who not only publish offensive, radicalizing content online, but those who regularly view it, as well.

It’s obvious that if Bergdorf had chosen to rant about any other ethnic group or race, he would have been arrested and his social media accounts banned long ago. But since he’s a mentally-ill man with fake breasts raging against white people, he can Tweet all he wants while public-funded broadcasting gives him slots on television to amplify his anti-white antics.

I prefer letting all people speak their mind, even Munroe Bergdorf, but if the UK wants to have hate speech laws, then these should apply to everyone inciting racial hatred. Until the radical leftists and LGBT anarchists are treated the same as conservatives, Christians, and the Alt-Right, I see little chance of the West backtracking on its increasing censorship of ideas and speech.

Topicsanti-whitecensorshiplgbtSJWstrannies
Share on FacebookShare on TwitterShare on RedditShare on VKontakte