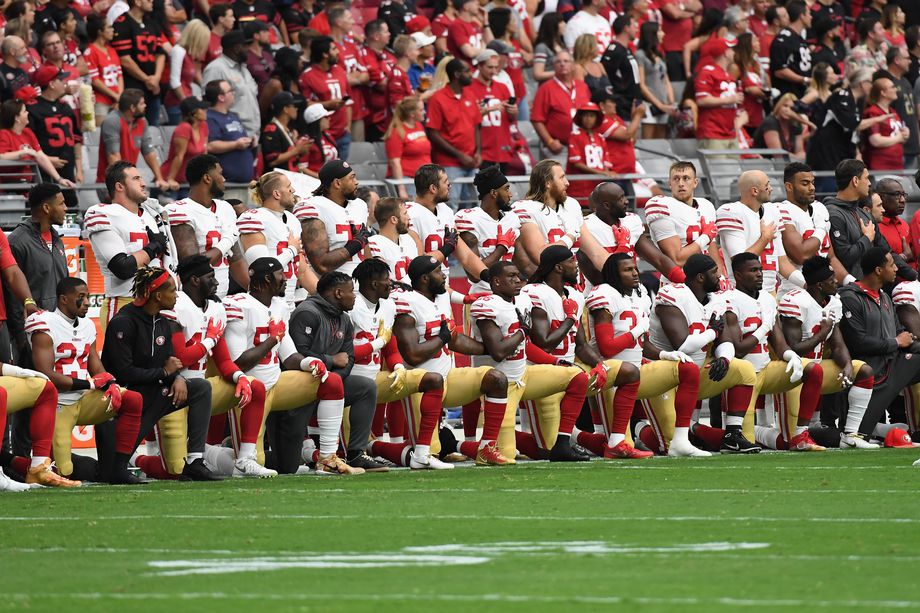 The NFL Does Not Actually Believe In Free Speech

...only anti-White and anti-American double-standards.

The NFL bungled the anthem protests six ways from Sunday. This is in part because the NFL doesn’t respect free speech and never has. It could have taken a strong stand for free speech long ago, thereby substantially insulating itself from the maelstrom currently enveloping it, but it didn’t of course. Like most major corporations in the Western World, it took a cowardly position on free speech, bending before leftist special interest organizations and racist activist groups which are regularly offended by the color of fictional characters on food packages. Like most corporations, it claimed to be protecting its brand and its bottom-line in its enthusiasm for censorship, but that’s really never true. Corporate censorship in America has a decidedly leftist bent to it. It’s not about pleasing customers or patrons or making money, it is about enforcing left-wing orthodoxy. Corporate America has been dominated by Cultural Marxists since the 1960’s, about the time America perished. Indeed, wholesale acceptance of the ideology of Cultural Marxism is essentially a requirement for entry into the US corporate oligarchy, and the American legal regime helps to ensure this is the case.

This is abundantly clear given that even when players or employees do extremely destructive things to hurt the bottom-line of the businesses they represent, those businesses will often fall over themselves to protect the jobs of those players and employees when the business and its management agree with the message. Remember when Jemele Hill of ESPN said all that false, nasty stuff about President Trump, but the board over at ESPN saved her job anyway? Now, were they really thinking about ESPN’s financial interests and health?

Indeed, Colin Kaepernick has cost the NFL billions, but he was never fined, he was never fired, he suffered zero repercussions for his actions as far as I know. Steve Clevenger, on the other hand, cost the MLB nothing, and his off-color comments (he referred to rioters as “animals”, he never even used the term “n***er” by the way) were so trivial and little known that they would not likely have led to any measurable market effects anyway. Yet he was promptly fired, well before any market effects could even be assessed. Whereas the only time Kaepernick was ever punished by the NFL was when he actually let slip the N-word during a game, and he was only hit with a fine! How’s that for irony? Kaepernick isn’t employed because his politics were simply considered a liability and a distraction by owners, which when coupled with his mediocre on-field play and gradual regression as a professional quarterback, rendered him an unsound investment. So, the NFL made its own bed and practically begged to be boycotted.

So, the NFL made its own bed and practically begged to be boycotted.

This is a league after all where anti-Whites like Kaepernick get freedom of speech, whereas “racist” fans get banned from their own stadiums. Now does that sound like the National Felons League possesses a robust respect for freedom of expression? And how many rules does the NFL have regarding speech? How many players have been fined for putting stickers on helmets to honor fallen soldiers or for wearing armbands to honor fallen cops? But when Kaepernick wants to dishonor the Flag and fellate the Castro regime suddenly the NFL is all about free speech? Something is terribly amiss here, don’t you think?

Something is terribly amiss here, don’t you think?

Now the NFL boycott is certainly in part about genuine offense taken by many proud, patriotic Americans who have had enough of entitled black crybabies bemoaning their oppression in one of the richest nations on Earth. Especially given the extreme poverty and suffering these players would likely experience daily had their shackled progenitors been left at the dock. Many Americans take seriously the notion that the Flag should be honored and rightly consider the notion that America is a “white supremacist country” a sick joke. After all, many Americans of every color have lost limbs or loved ones fighting for what that flag represents. But the NFL boycott is as much about respect for cops and soldiers and the Flag as it is about the egregious double standards of the Cultural Marxist overclass.

The values, interests, and sensibilities of Middle Americans, white Middle Americans in particular, don’t seem to matter at all to those in power in America (and in the West more generally). Even when particular forms of political expression are deeply offensive and appalling to them, even when such expression is inappropriate and their offense is perfectly justifiable.

But god forbid you offend some protected pet minority!

Their feelings are all that matters to our overlords! Perturbing the fragile egos of perennially underachieving Africans is an outright assault on universal human dignity and “American values”. It’s difficult for me to even write that sentence without chuckling. Should you offend some supposedly “oppressed minority group” you will be cast into the lake of fire or sent to the killing fields in modern America.

Well not yet mind you.

But America is more than well on its way to full-blown Cult Marxist, totalitarian dystopia. Nevertheless, there is some cause for cautious optimism. Americans are finally fighting back against the soft totalitarianism of the political left with their wallets and through their choices in the marketplace, and that development is way past due. Ordinary Americans are awakening at last to the fact that those who lord over them have no regard for them or their ways or their values and arguably want them eradicated completely, like racist weeds.

Now I could fill a fucking textbook with the names of white men who’ve been terminated, blacklisted, and financially and professionally decimated by the US power structure or the US business community because they used language deemed offensive to some subset of Americans, and not even regularly and deliberately mind you, just carelessly, and once, maybe twice. Yet I don’t remember the NFL standing up for free speech then! I don’t remember the political left or BLM out in the streets protesting censorship then! Back when it was Buchanan’s head on the chopping block, or Sam Francis’s or Jimmy the Greek’s, or Clevenger’s. And that is just the tiniest sample of white people who’ve lost their jobs over words in recent decades!

And these are just some of the prominent white people who’ve lost their jobs over words. I’m not even talking about the corporate left’s reign of terror being waged on a daily basis against ordinary Americans with no power, standing or financial shelter in the inherently totalitarian war against “hate speech” (truth that imbeciles and ideologues don’t approve of). And ask James Damore or Andrew Torba about the new internet front the totalitarian left has opened up in this protracted war against Americans.

These leftist parasites don’t care about free speech any more than the leftists in Berkeley did in the 1960’s.

Like all good proto-Bolsheviks they want free speech for themselves so that they can rise to power or maintain power once they’ve acquired it, but if you should challenge them on the absolute bullshit they believe, and ideas fail them, don’t be surprised when the hammer and sickle suddenly transform into weapons to bash your head in.

But Antifa wouldn’t know anything about that.

And the NFL wouldn’t care, because to the NFL communism is kosher, and racism, or anything that looks like it, is not, and certainly isn’t worth defending, even if that anything is the American Flag.