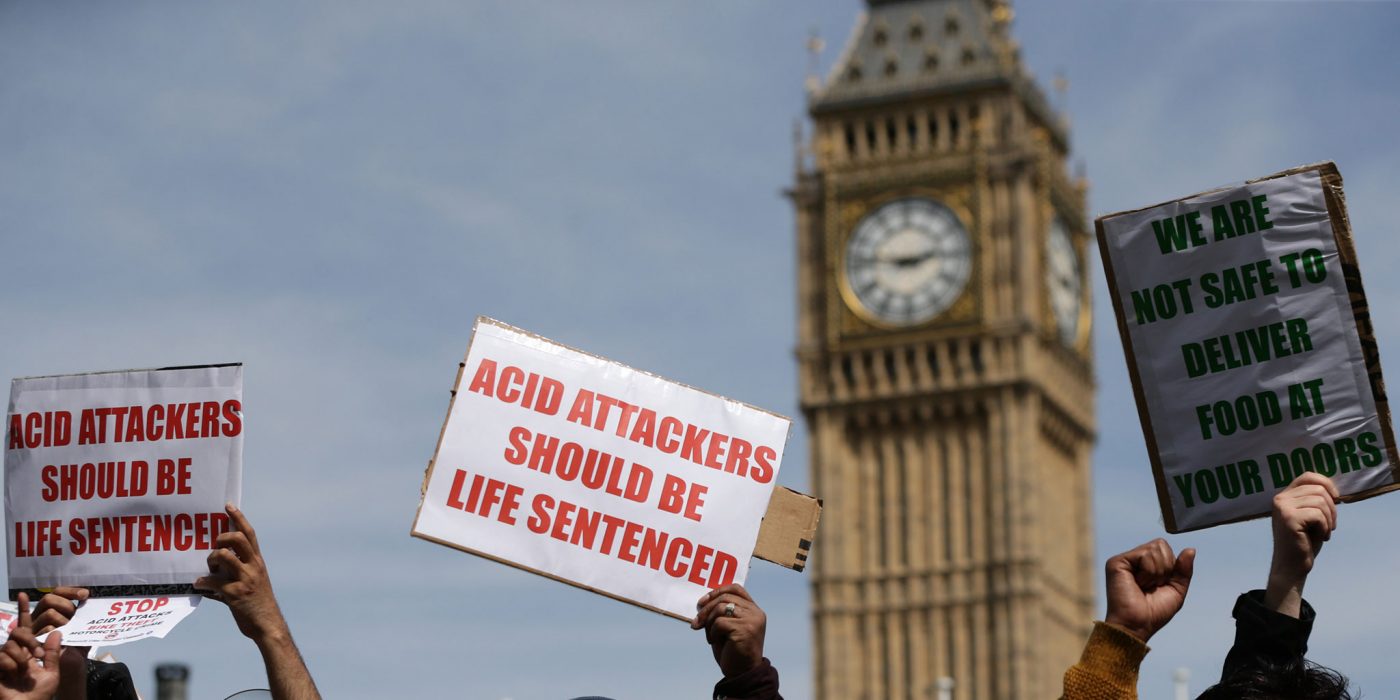 But how will citizens stop muggers now without their conceal carry acid?

London is the world’s capital for acid attacks, and it reached this impressive feat within five years when, out of the blue, this hitherto unheard-of form of assault in the West exploded onto the scene, primarily in London’s East District. You know, the area with the most thriving diversity where whites are around 17% of the population and are fleeing the crime-ridden neighborhoods in droves?

Some “experts” claim that the increase in acid attacks is due to difficulties in acquiring guns and knives, while CNN tries to forge an answer in its usual, vaguely accusatory way.

But those closer to the issue say that the police and politicians are missing the underlying cause of the issue — young men in London’s pockets of poverty have a lack of opportunity and little to do. And austerity hasn’t helped.

Are we supposed to feel sorry for grown men who have ‘little to do’ and as a result turn to a life of petty crime? As a kid, when I whined about having nothing to do, my mother handed me some Windex and a mop and told me to wash the floors and windows. I was never bored again. I even enjoyed cleaning after a while. Maybe mandatory community service for jobless men would keep them from the urge of spraying random passersby with sulfuric acid? Just a guess.

Jermaine Lawlor, a former criminal from East London who claims to have committed his first mugging at the age of nine, recently made the rounds on UK media, saying that the Conservative government was to blame for acid attacks since they cut welfare and after-school programs for at-risk teens.

“It’s the same thing that needs to be done to reduce knife crime, gun crime, prostitution — it’s that policies and legislation need to be people-centered. By being people-centered, they need to understand the complexities and the multiple factors that prevent communities … from excelling.”

Still, the UK Government preferred to go a different route in solving the issue. Instead of throwing money at criminals to keep them off the streets, or forcing them into communal work programs, or even deporting the most vibrant offenders, they chose their favorite and most well-known solution: banning things. From Richard Spencer to Donald Trump, we know how much the UK likes banning things.

And so, with acid attacks doubling in the past three years and with 45 incidents this April alone, Home Secretary Amber Rudd announced the ban at the Conservative Party Conference in Manchester on October 3rd.

Acid attacks are absolutely revolting. You have all seen the pictures of victims that never fully recover. Endless surgeries. Lives ruined. So today, I am also announcing a new offence to prevent the sale of acids to under 18s. Furthermore, given its use in the production of so-called ‘mother of Satan’ homemade explosives, I also announce my intention to drastically limit the public sale of sulphuric acid.

This is how we will help make our communities safer as crime changes.

Her speech is worth going through, and can be read in entirety here, because it mentions not only the ban on acid, but the establishment of a chilling new “Commission on Countering Extremism”.

Violent and non-violent extremism in all its forms – Anti-Semitism, neo-Nazism, Islamophobia, intolerance of women’s rights – these, and others, cannot be permitted to fester. Our values are far, far better than this. And we owe it to ourselves to root this hatred out wherever it emerges.

She goes on to urge Facebook, Google, and Twitter develop new technologies that can monitor and delete harmful content in order to “protect the public,” and announced plans to set lengthy jail terms (up to 15 years!) to people merely viewing content online which the government deems offensive.

My advice: get out of the UK, and especially Londonistan, while you still have possession of your assault butter knife and access to Pepe memes.

Topicsacid attackscensorshipFacebookinternetLondonterrorism
Share on FacebookShare on TwitterShare on RedditShare on VKontakte