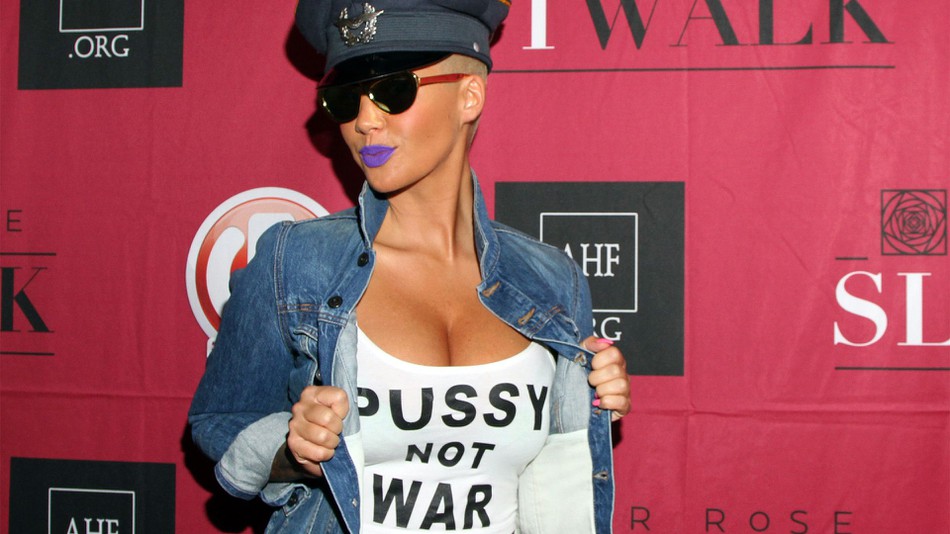 Amber Rose Slutwalk Is A New Low For Western Women

Perhaps we should remove the term "lady" from the English language at this point.

The Amber Rose slutwalk is an event where sluts gather together to try and give meaning to their self-indulgent hedonistic lifestyles. It serves as a glorious example that sluts instead of being happy, seek to draw others into their misery.

The devil loves company, I suppose.

It all started when things that degenerates hate the most came together in a perfect storm. Authority common sense and natural law. A police officer from Canada told a group of young girls that:

Apparently mentioning that being half naked in the streets at night would increase the chances of being sexually assaulted summons the wails of a million infected pussies.

Now the slutwalk wants you to believe they are walking for justice of poorly treated strippers who earn $5000 a night fleecing old lonely men for a bit of attention.

They fight for the whores who sleep around, with so many guys they lost count and all that remains from the carnal bliss of a few moments with a stranger is life-long herpes.

They advocate that girls walking down the street, in booty shorts, and cleavage so deep, you need a dive team to scope it out, deserve the same respect as a woman in a business skirt.

In other words, they want to have their cake and eat it too.

And the low-T numales, bend over and meet their demands. They take the slutwalk at face value and make the mistake of believing what a slut says.

The men of the Alt-Right know better. They know to judge someone by their actions and not their words. The sluts feel bitter, and guilt-ridden that they actually believed the lies, that their masters and their puppets have told them would bring some happiness and satisfaction to their lives.

They are subconsciously aware that something is wrong. That they gave up something worthwhile, for pennies or at times even nothing. They remain consciously confused and seeking to find why the promises of the false idols, did not deliver.

They walk with tits in the air, heads shaved or died green and blue. They are deracinated from their natural divine beauty they wear so well. A self-inflicted punishment, a signal of distress, a call for help.

Even if this is the degeneracy du jour, and easy to laugh at. We as strong men need to ask ourselves what the current dynamic is that creates such a desperate call for help.

What are they actually saying?

They are begging for healthy and strong men, to come into their lives and take care of them. Men who have pride and strength. Who need not grovel and ask permission, like scorned little boys. Men who have answers for them, who can offer security and clarity into how they are supposed to act in accordance with their maternal nature. They now are stuck in the doublethink loop. Muh independent strong woman feels a need for a stronger more independent man.

Well, how can a man be strong, if he can’t be proud?

Europeans have had that right taken from us. We are not allowed to be proud without being punished, while all other peoples have that right.

And who is to blame for us being weak now?

Well, among others, the Boomers who except for a handful that kept the fire burning sold us out to for a life of comfort and conformity. The sportsball fans. They stay silent even now, complacent, domesticated lions tamed by light beer and TV.

There are others of course, but I think you know who they are at this point.

Meanwhile, these women are lost, and we cannot save them. But we can prevent future degradation of our womenfolk by not backing down, not cucking out and by actually holding the line, not passing the buck on to future generations.

Footage from the Amber Rose Slut Walk will go down in history books as a warning for future generations.