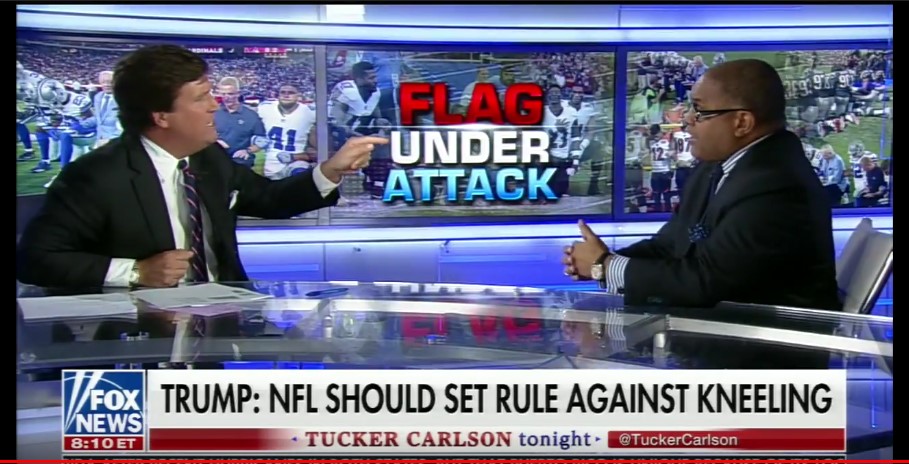 Tucker Carlson Gets Red-Pilled By “Race Matters” Based Negro

Tucker had a black lawyer on his show the other day to talk about the whole Boomerball/#kneelgate controversy.

Now, barring rumors that Tucker is actually secretly red-pilled, this should have been a massive wake-up call for Tucker.

Despite all his protestations to the contrary, the black man insisted that this was a race issue. All the arguments that Tucker made about civic identity were breezily dismissed. Tucker even came close to completely losing his cool and snapping when the black guy claimed racial solidarity with his black brethren. He literally said that it was a bond that transcended social class or how much money he made.

Tucker was apoplectic. “But you live in the same neighborhood as I do!” He insisted. But the black guy didn’t care. He still decided to show solidarity with de brothas. He didn’t condemn them as “black trash” and try to ingratiate himself to Tucker or try to prove that he was better than they were. He was calm as a Hindu cow as he defended his race from de cracka sitting opposite him.

Nothing could shake his confidence that his tribe was in the right, and that Whitey was in the wrong.

He even brought up the First Amendment with such self-assured confidence. He knew that a non-White’s right to criticize Whitey in the USA is sacrosanct. Tucker was left scrambling to make arguments appealing to civic nationalism that fell on dead ears. The well-educated, well-paid and well-treated black lawyer still considered himself to be a nationality within a nation.

The truth is that blacks hate America and White people deep down in their bones.

Gone are the days when platitudes about American values are enough to placate the Gibs-me-dat hordes. In fact, one wonders if those platitudes ever worked on blacks and were not actually intended for skittish Conservatives mortified of being called mean names by the Left. The harder the non-Whites push against America and White people, the harder basic conservatives wrap themselves in the symbols of the republic and bleat that they are race-blind and pro-civil rights.

It is like Antifa chanting “hate has no place here” and beating defenseless White old-timers. There is a cognitive disconnect at work with Antifa, just the same as with the civic nationalists. Everyone seems to be lying about what they really believe and couching their desire to finally end their opponent while chanting non-sequiturs. And in this time of universal deceit, only one group is willing to state what they believe proudly and clearly. Only the Alt-Right tells the truth about what it stands for. We want to foster the same racial solidarity that the black lawyer feels among our own people. One that stretches across zip codes and income levels. A wide, all-encompassing White Identity that will finally allow us to stand up and resist our dispossesion world-wide.