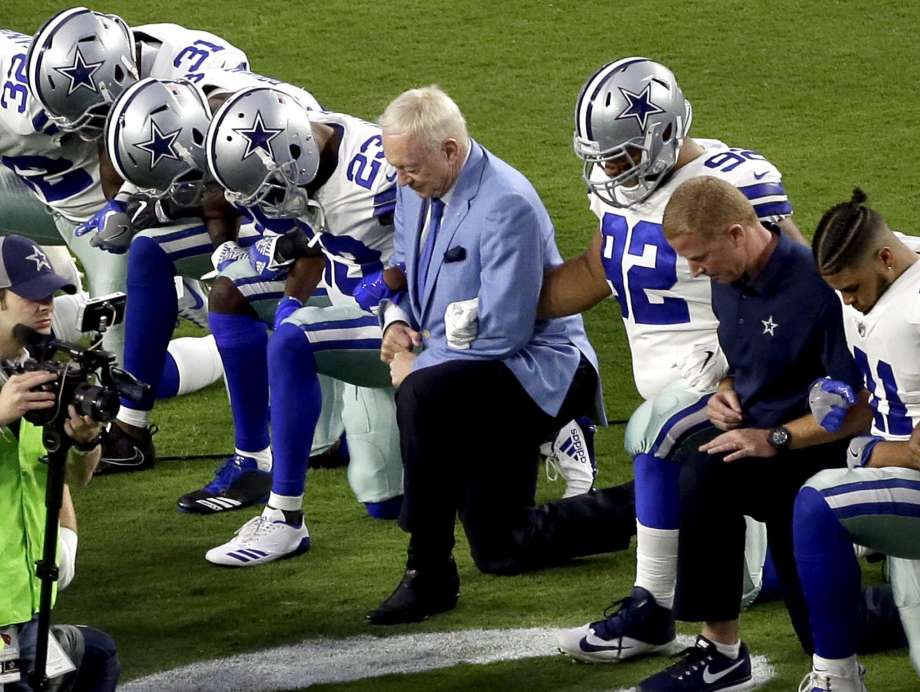 It’s difficult trying to decipher exactly what the limits on free speech are according to the zeitgeist.  The answer seems to be that any criticism of non-Whites is where free speech ends.  Any “free speech” used by minorities to criticize our country or Whites is a noble use of the first amendment; woe to the person who would restrict that kind of speech.

This applies to the ongoing temper tantrum of NFL Blacks.  Even just by implication, Trump has criticized Blacks by deploring the kneeling during the National Anthem at football games.  Apparently, that was a bit too much for our pussified country.

In this case, some of the most virulent critics of Trump have been the cuckservatives, nominal Republicans whose number one goal is to persuade more minorities to come into the Republican fold.  This is, of course, a futile goal which is almost amusing to watch them pursue.  It seems like many of the coaches and owners fall into this category:

The National Football League is about as culturally consonant with Trump as any major American institution. “They’re my friends,” Trump once bragged about the league’s team owners. But this weekend those same owners tried to distance themselves from the President. Robert Kraft, a Trump pal and the owner of the New England Patriots, pronounced himself “deeply disappointed by the tone.” The former Buffalo Bills coach Rex Ryan, who had introduced Trump at a campaign rally in Buffalo, said he was “deeply pissed off. . . . I never signed up for this.” The league’s commissioner, Roger Goodell, denounced the President, too. The White House reflexively assumed a hostile posture, like a cornered skunk.

What a brazen response from these archetypal boomer conservatives!  Sports fanatics and coaches at all levels are usually averse to critical thinking on social issues, and, well, thought in general.  This is confirmed by their knee-jerk reaction here.

Then again, the default mode of corporate movers and shakers is to side with the demands of Cultural Marxism when put in a bind.  This, they perceive, is always the safe route.  Could that be changing?  Market forces (via boycotts) and the changing dynamics of social pressure will determine this. That’s why Trump’s call for a boycott of the NFL is relevant.

Washington Examiner, a mainstream Republican paper, is the first off the ship when Trump wades into these so-called racial controversies.  The media has a funny feedback loop where they assert that “X is being criticized” or “X is controversial” when they are in fact the ones criticizing or calling something controversial.  It’s an insidious use of the passive voice.  They’re not telling you what the actual American people think, they’re telling you what they, the media elites think.  And boomer conservatives are dumb enough to fall for it.

Byron York hypothesizes that Trump simply speaks too much and that perhaps if he said less, he would be less offensive to minorities and Cultural Marxists:

Put aside the merits of what Trump said about the NFL players refusing to stand for the National Anthem—a point on which a majority of Americans agree with the president.  What is striking is that the football remarks, which set off another political/media firestorm for Trump, are in the simplest sense a result of the president just talking too much.

If he just gave shorter speeches, he could stick to the tired conservative talking points with which the Washington Examiner crowd is comfortable. If you think about it, a “gaffe” is really just a White person saying something non-obsequious towards minorities.  One can readily avoid such a faux pas simply by not saying anything!  So goes the logic of risk-averse mainstream conservative.

Trump could have saved a lot of problems by cutting about 9,000 words out of his Alabama speech. https://t.co/LnWxxW3yqy

Across the board, what we get from the conservative opinion is this weak hemming and hawing: sure players shouldn’t kneel during the National Anthem, but Trump shouldn’t have been so mean in denouncing them.  The Wall Street Journal:

Americans don’t begrudge athletes their free-speech rights […] but disrespecting the national anthem puts partisanship above a symbol of nationhood that thousands have died for. Players who chose to kneel shouldn’t be surprised that fans around the country booed them on Sunday. This is the patriotic sentiment that they are helping Mr. Trump exploit for what he no doubt thinks is his own political advantage.

But if our adversaries are engaged in despicable behavior… exploit away!  God forbid our leaders should express the righteous indignation of the people once in a while.