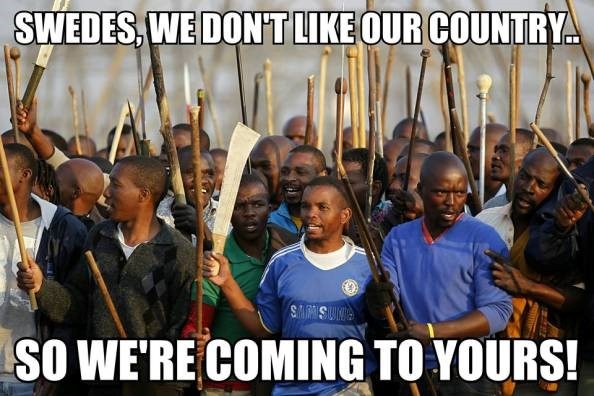 The Swedish police have started ceding control of neighborhoods to the Muslim gangs. Right on schedule.

The Islamic takeover of Sweden is progressing ahead of schedule. I remember writing an article predicting the “how” of the operation several months ago. Unfortunately, I have been proven correct in my prognosis. Still, I don’t want to go into hyperbole. Sweden is a really strange place.

Some places look like they are stuck in the cozy 1970s, other places are a Multi-Kulti mess worse than even most US cities. And of course, some places are like clean and orderly versions of Somalia. And you can pass through all of these place on one bus ride between cities.

That being said, the takeover is undeniable, and it is progressing very quickly indeed…

But let’s see what I had to say back in April:

A scandal broke out recently concerning the Swedish police cutting a deal with a criminal Muslim gang run by an Imam. After running the article through Google Translate, most of the story becomes clear. Some choice bits:

“We called the most powerful person that could be taken to put an end to the violence. It worked, “said Dan Granvik, retired police officer in Malmö.

See? Told you the police just wanted to retire in peace.

Even in Gothenburg, the police have turned to the family Ali Khan and other strong leaders for help. A few years ago, there were more than a hundred apartments in Gårdsten in Angered in a short period of time. Police found it difficult to obtain information and turned to Ali Khan to end the burglary.

– They said they should discuss it in the family. And the burglary ceased, says Walter Holm, who was the one from the police who contacted them.

Did they tell who had made the burglary?

– Well, of course they did not. It solves themselves, without interfering with us. But for me as a police, it’s sometimes more important to protect the public, not necessarily to be sentenced to crime. And then this is a way to go, says Walter Holm.

Basically, this proves that the people in charge of keeping Swedes safe are craven spineless cowards. They have started ceding authority to the local gangs and criminal families. They do this in the name of tolerance and keeping the peace.

And it doesn’t look like they will stop anytime soon.

What does this mean going forward? Well, I hesitate to consult my own predictions, but here is a possibility that Swedish patriots should seriously consider:

I believe that the foreign aid will start flowing in soon if it is not already and then the Muslims will get brazen. They will no longer need to play nice with the Swedish state. They will be ready to set up a parallel state and demand autonomy from the Swedish one.

A turbulent and violent peoples seem to get their way in the modern world. White patriot groups should observe how gingerly the state treats the loudest members of their society and how harshly it treats the compliant members and consider their strategy going forward.

Lads, this is no joke, it’s getting very serious in Sweden. The consolidation of Islamic power is moving very fast. They have ample cadres of soldiers and if the money starts flowing, they will have the financing they need to start making big moves in the coming years.

If news of the Swedish police ceding their authority to Muslim gangs doesn’t generate outrage in Swedish civil society then it means the window of opportunity for democratic reform has closed.