Tomorrow, the AfD will enter the German parliament.

The shakening started three weeks ago. After having ignored meme warfare almost entirely during the Trump campaign (except for lamenting the (((echo))) meme along with their American stooges), German media suddenly got hysterical about right-wing memes supporting the Alternative für Deutschland party.

Again, an American company started it off: German BuzzFeed reported about »AfD-Chan« and her comrades, who had been around for more than a year already but did not trigger news coverage until then. The immediate cause was the emerging of »Reconquista Germanica«, a Facebook group uniting content creators from all platforms under the banner of spreading AfD propaganda and fighting for German sovereignty. An English version of the initial report can be found here; English BuzzFeed just recently followed suit.

The BuzzFeed report sparked immediate attention, both from sympathetic meme warriors and more mainstream media outfits. One of the first to jump on the bandwagon was the state-funded Bavarian Broadcasting company; the influential liberal-left magazine Der Spiegel broke a four-page »investigative« report (compiled by no less than three authors) titled »March of the Trolls« in its 37/2017 print issue, throwing »Reconquista Germanica«, Discord, Trump, the Kremlin and weev together and »proving« the vast right-wing online conspiracy determined to foster a fashy coup d’état. When even the ZDF state television warned its audience about the »extremist« psyops online, the maximum level of attention was reached.

What’s behind this outrage? On the one hand, there’s the editor-in-chief of German BuzzFeed. Since April 2017, Daniel Drepper (see his bugman face here) heads the networks German outlet. Since then, the site does not only publish click baiting listicles, but also occasional political articles like the alarming one about »AfD-Chan« – seemingly investigative, usually cautionary, always thoroughly pozzed. Here’s why: Drepper is one of the founders of »Correctiv«, the »investigation initiative« established in 2014 Facebook has employed to combat »Fake News« and racism among its German users in anticipation of the Netzwerkdurchsetzungsgesetz (Network Law Enforcement Act) adopted on September 1st, upping the ante on thought-policing the German part of the web. »Correctiv« identifies as a nonprofit; its donors are, however, quite telling: not only is »Correctiv« largely funded by German mainstream media foundations as well as the Bundeszentrale für politische Bildung (Federal Agency for Civic Education, i.e. the German taxpayers) and Google – George Soros’ »Open Society Foundations« pumped €100.000 into the initiative just this year to rev it up for the federal elections campaigning.

On the other hand, there’s the »expert« cited by most news outfits. Mr. Simon Hegelich, »Political Data Science« professor at the Bavarian School of Public Policy in Munich, specializes in »Social Bots« and has been raging about online influences on electoral processes ever since the Trump election. As Time reported, he was even summoned to the Office of the Federal Chancellor to fill Merkel in on »his research on the manipulation of voter sentiment«, filter bubbles and trolling. Hegelich’s main concern regarding the pro-AfD online communities probably is using it as a leverage to get more public attention, thus shilling for his work. 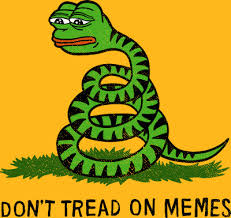 Soon we will find out whether or not the German public let itself be bullied into believing the wild stories about online Nazis and paid Russian trolls trying to influence the federal elections. Either way, BuzzFeed, »Correctiv«, and Simon Hegelich won’t erase a simple fact: memetic warfare has finally gained a foothold in German politics, and those decrying this progress are nothing but boomer politicians (or their handymen) unable to grasp the phenomenon. Meme harder, Alt-Deutschland!